Friday was hot, Saturday will be hotter

By: Joyce Lupiani
Posted at 5:28 PM, Jun 03, 2016
The heat is on in Las Vegas and if you thought Friday was hot, it is going to be even hotter on Saturday.
Temperatures are expected to top out around 110 degrees for Las Vegas with parts of the valley seeing peak temperatures of 113 or more on Saturday. And just outside of Las Vegas, temperatures could go as high as 115 degrees.
13 Action News headed to where people are getting ready for the monthly First Friday near Charleston Boulevard and Main Street to see how the people there are coping with the heat.
We spoke to Lexi Phillips who told us:
"I knew it was going to be 110 a few weeks ago and it's supposed to be like the hottest day of the year so far and I hate the heat. But, you just come out here, set up, and you eventually know it's going to cool down."
There will be a paramedic on the scene tonight in case there is an emergency and the organizers of First Friday don't think that the high temperatures will keep people away.
CLICK HERE FOR LATEST FORECAST
Anyone who is outdoors or people who do not have proper air conditioning should take precautions against heat-related illnesses such as heat exhaustion and heat stroke. Those who are the most vulnerable are the people who have to work outdoors or are participating in a sport, young children and the elderly.

Most Clark County pools opened Saturday with the exception of the Logandale pool, which opens next weekend.

Water park fees are $2 for children and $3 for adults.

RELATED: 13 Ways Not To Bake In The Las Vegas Heat
Frequent breaks in shaded or air conditioned environments are encouraged for anyone who has to be outdoors and anyone who is overcome by heat should be immediately moved to a cooler area and a call should be placed to 911.
COOLING STATIONS IN LAS VEGAS VALLEY
Children and pets should never be left unattended in vehicles under any circumstances for any length of time.
TIPS ON KEEPING PETS COOL DURING THE SUMMER
It should cool down by a couple of degrees on Sunday, but it is definitely still going to be warm. The high temperature on Sunday could be near 108. The excessive heat warning is set to expire at 8 p.m. Sunday. 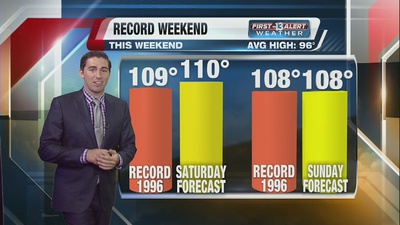