How hot did it get?

By: Joyce Lupiani
Posted at 12:04 PM, Jun 22, 2016
You've seen people baking cookies on a dashboard or attempting to fry an egg on the pavement during the summer, but we decided to try something different. We are cooking a ROAST!
We have a delicious 2-pound pork roast with all of the fixings. What better way to utilize the whopping 110-degree plus temperature on Wednesday in Las Vegas?
The roast was placed inside a 13 Action News employee's vehicle on the dashboard at 11 a.m. The estimated cook time for the roast is 3-6 hours.
We will be monitoring the roast's progress all day long. Check back for updates!

This is our high tech oven. Thank you @Becca_STAR702 pic.twitter.com/leSjIgGOZc

UPDATE AT 12:30 P.M. Covered roast with foil after receiving recommendations from viewers on Facebook to do so. Inside temp of car is 122 degrees. Internal roast temperature is 114.

UPDATE AT 2:30 P.M. The roast is slowly cooking. The car isn't heating up quite as much as we believed it would. The temperature inside the car was 127 degrees and internal temp of the roast was 125.  When the roast reaches an internal temp of 145 degrees, it will be medium rare and safe to eat. 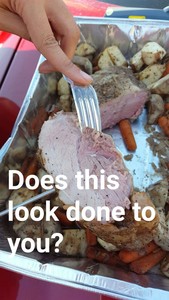 UPDATE AT 5:30 P.M. The roast is done! Although the veggies were still a bit crunchy, the roast appeared to be cooked. If you would like to see who was brave enough in the newsroom to try it, check out the Facebook Live on the station's Facebook page.

Also, we hope this little experiment is a good reminder of just how hot it can get inside of a vehicle on a summer day. NEVER leave pets or children unattended and without A/C in a car.