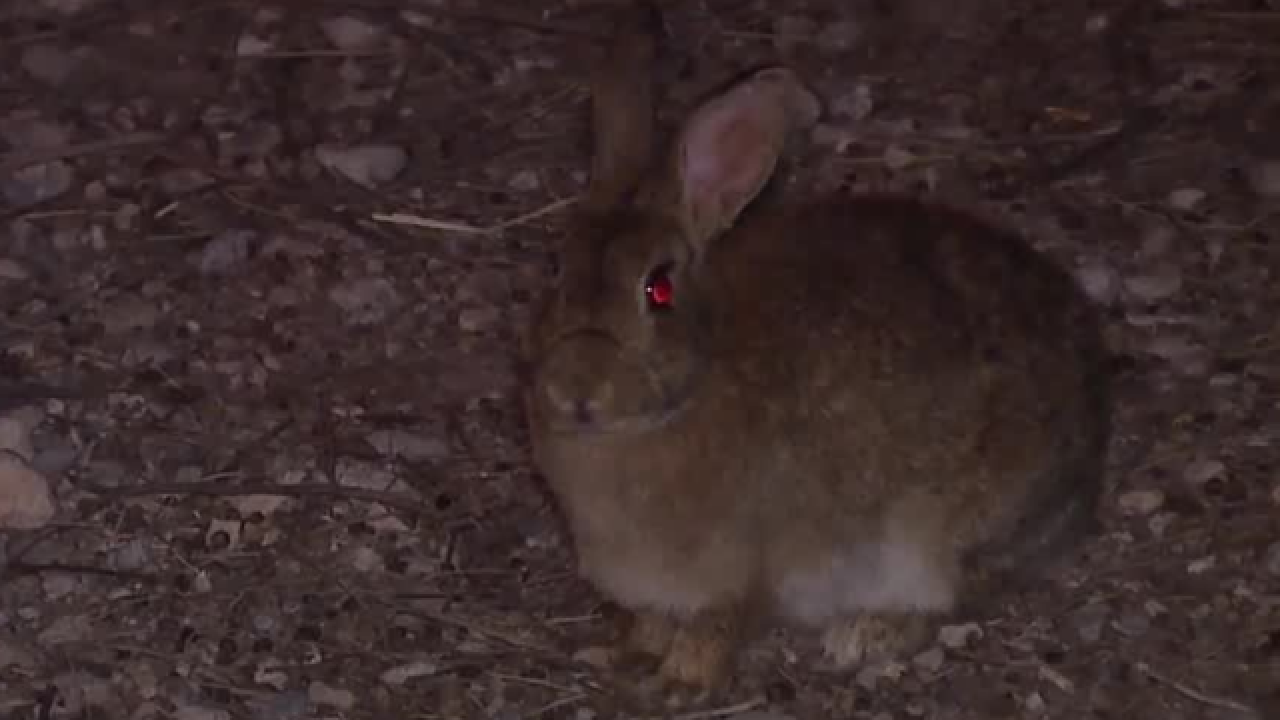 UPDATE MARCH 12: A reward of $5,000 is being offered to anyone with information on the person responsible for the death of over 50 rabbits in the area of Jones and Charleston boulevards.

The "mass rabbit killer" bludgeoned as many as 50 bunnies outside of the state-run Desert Willow Treatment Center.

Sources tell 13 Action News the preliminary results of four deceased bunnies show they all were found with cracked ribs from blunt force trauma.

"For them to suffer a painful death like that just kills all of us and that's why we had such an outpouring and why everybody has come out here to help us save them because that's just cruel," said Dave Schweiger with Bunnies Matter in Vegas Too.

The bunny rescue groups continue to remove the bunnies from the dump site and then spay, neuter, and adopt them out. They have all their supply and equipment needs met thanks to our generous community.

They are still in need of a warehouse that can house 60 or so bunnies in the meantime. If you have any idea of a place, please let Schweiger know.

UPDATE FEB. 21: The Department of Health and Human Services issued a corrected statement regarding animal control and the bunnies.

"The Southern Nevada Health District contacted animal control after the initial survey of the campus. City of Las Vegas Animal Control was called by DHHS when the Department heard about the deceased bunnies on the grounds.  Neither City or County Animal Control has provided any guidance to DHHS other than through the communications forwarded by the Southern Nevada Health District. The Department has reached out to both City and County Animal Control Offices to meet and discuss the next steps."

UPDATE FEB. 20: Two more dead rabbits were found outside a mental health facility by Charleston and Jones boulevards. It comes after about 30 were found dead on Sunday.

Animal advocates suspect they were poisoned. They sent some of the rabbits to a lab to find out their cause of death.

Veterinarian Dr. Nicole Smee says, "They have no external wounds or injuries that would indicate the cause of death. They also looked to be very adult healthy looking bunnies."

She is taking care of about 70 other bunnies rescued over the weekend. Some of the dead rabbits were sent to another lab to find out what caused so many of them to die all of a sudden.

Dr. Smee says it's likely someone wanted to exterminate the animals.

"These animals, if they were poisoned, and the other animals, people, a lot of these poisons affect mammals. And rabbits and people are mammals and dogs and birds can all be affected."

Under the city's code, anyone caught poisoning animals or intentionally harming could face a misdemeanor.

Another animal advocate, Lorraine Wajda, says "It's going to come down to actions. Let's see what actually happens. What do they actually do?"

Some say the timing is suspicious.

Friday, the state issued a public notice warning people to stay away from those rabbits - saying it can carry illnesses.

"Just hope we figure out whatever caused this so that we can help prevent other animals, people and rabbits from getting sick," says Dr. Smee.

The sudden death of rabbits is a disheartening setback for advocates who dedicated their time saving these animals.

Still, their efforts will continue.

This week, they will transport dozens of bunnies to different sanctuaries across the country.

But the state wants to do it its way.

The rabbits, deemed as health risks, will be trapped and moved to a different location.

The state said after it became aware of the possible poisoning of rabbits, it had animal control survey the property. The state has also asked for an investigation into the situation.

UPDATE FEB. 18: Volunteers getting ready to rescue a group of feral rabbits found many of them dead outside a mental health facility Sunday.

“We are in bunny 911,” said Stacey Taylor of Bunnies Matter.

They came out to check up on their furry friends, only to find many of them dead.

“We couldn't get to them quick enough.”

Heartbroken volunteers were seen comforting one another outside the State of Nevada’s West Charleston Campus as over 20 dead rabbits were removed.

“As soon as I see the first bunny, the wave of anger, the wave of sadness, the wave of knowing that it is really happening, kind of swept over me,” said Taylor.

Many volunteers were just here Saturday night, getting them ready to be taken to a sanctuary later this week.

The urgent rescue mission kicking off after the State of Nevada declared this specific rabbit population as a health hazard.

The public notice, warning folks not to feed these rabbits, saying that they may carry bacterial and viral illnesses.

“We were just trying to make right of a bad situation,” said one volunteer.

With heavy heart, these volunteers are up in arms and say they believe someone did this on purpose.

“Whoever did this, I hope that they suffer the repercussions because it’s not right.”

“I just hope that karma finds them.”

13 Action News is working to find out the exact cause of death for these rabbits.

ORIGINAL STORY: Hundreds of rabbits are roaming outside a mental health facility on the city’s west side. And animal rights advocates and the state are at odds over what to do to solve the issue.

The group Bunnies Matter in Vegas Too and dozens of volunteers feed, remove, and adopt the animals roaming around Jones and Charleston.

Dave Schweiger tells 13 Action News, "Our whole goal was to keep them healthy so they can be rescued."

But this week, the state issued a public health notice about these bunnies.

The state said no more feeding them - urging people to avoid contact and saying trapping activities will begin to relocate them.

Veterinarian Nicole Smee, who works with Bunnies Matter, argues against the state's claims.

"The most critical one that they were speaking of was Tularemia which is not in the state of Nevada at this time," says Smee. "I know that they're saying it's unsafe for these rabbits to be handled. But I do not believe that is true."

Now the group is trying to raise money to help transport dozens of rabbits to rescues.

"We would like to assist them. We handle these guys. You saw how easy it was to capture a couple. We know how to do them. We don't use traps," says Schweiger.

Another advocate, Stacey Taylor, says, "We're getting ready to transport a hundred rabbits throughout the Midwest and the east coast."

In the meantime, the group will continue their own rescue efforts while expressing their interest to work with the state.

"This is just another situation that we need to find a solution for, and I believe that there is one. We just have to figure out what that is," says Smee.