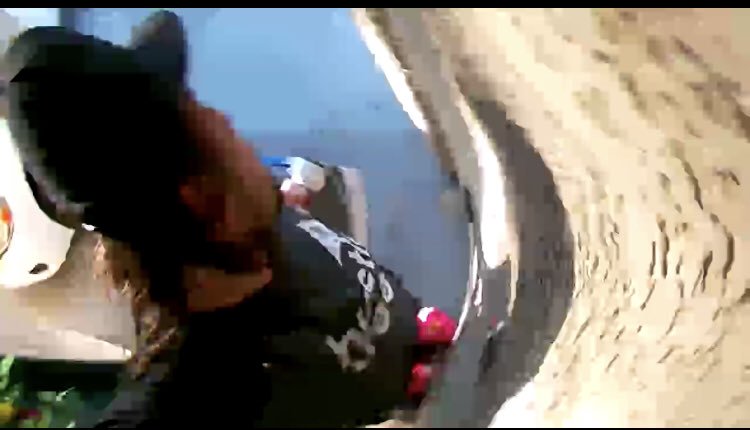 You don’t always get a clear shot of a crook’s face. But in a video shared by one of the residents in the southwest part of the Las Vegas valley, a brazen thief steals a surveillance camera while it was recording him live.

Editor's note: We have blurred the face of the person in this story because police are not currently investigating this case.

LAS VEGAS (KTNV) -- You don’t always get a clear shot of a crook’s face. But in a video shared by one of the residents in the southwest part of the Las Vegas valley, a brazen thief steals a surveillance camera while it was recording him live.

This happened over the weekend at a home near Durango Drive and Warm Springs Road.

13 Action News found out several other homes in the area have also been hit.

Surveillance cameras captured a man pulling not one but two outdoor security cameras from the wall and taking it to his SUV.

The family living in this home did not want to be identified but says they were inside when this happened early Sunday evening. They shared the video on social media sites.

Since an official police investigation has not happened yet, 13 Action News has chosen to blur the person’s face.

Concerned neighbors reached out to us.

Rob Kachelriess says, "It’s very brazen and it’s almost shocking how very desperate people are that they feel they need to do this for whatever reason."

Some of Kachelriess’ neighbors had security cameras stolen too. So far, at least 4 homes in the area have been targeted by thieves since June.

"So let’s spread this video. Let’s show it online let’s spread it on the news and know who these people are and if someone sees the video and they can report a person they know doing criminal acts lets get them in jail where they belong."

So how do you prevent crooks from stealing surveillance cameras?

John Perdichizzi of ASAP Security has been dealing with crooks and helping protect homes for more than three decades.

“Many of those people are from out of town so they know they’re going to be shown in the local news and most of these people here are not going to recognize them.”

He says many homeowners make this mistake.

“So many times I’ll go to the home and the homeowner installed it or they had an amateur or a handyman install it. And use the wire straight around the house. It’s easy to just clip the wires as well as stealing the cameras... You need to put security cameras not too high. Because then you’re just going to see the tops of their heads. And they’re wearing baseball caps you’re not gonna be able to see who it is. You got to put them in the right height but secure them very well."

Cameras with a stem like this are very easy to grab and reach. The more expensive cameras, the eyeball type, is secured with 3 inch screws.

"You’re not gonna want the cheapest parachute if you’re jumping out of a plane and you don’t get the cheapest cameras to secure your home."