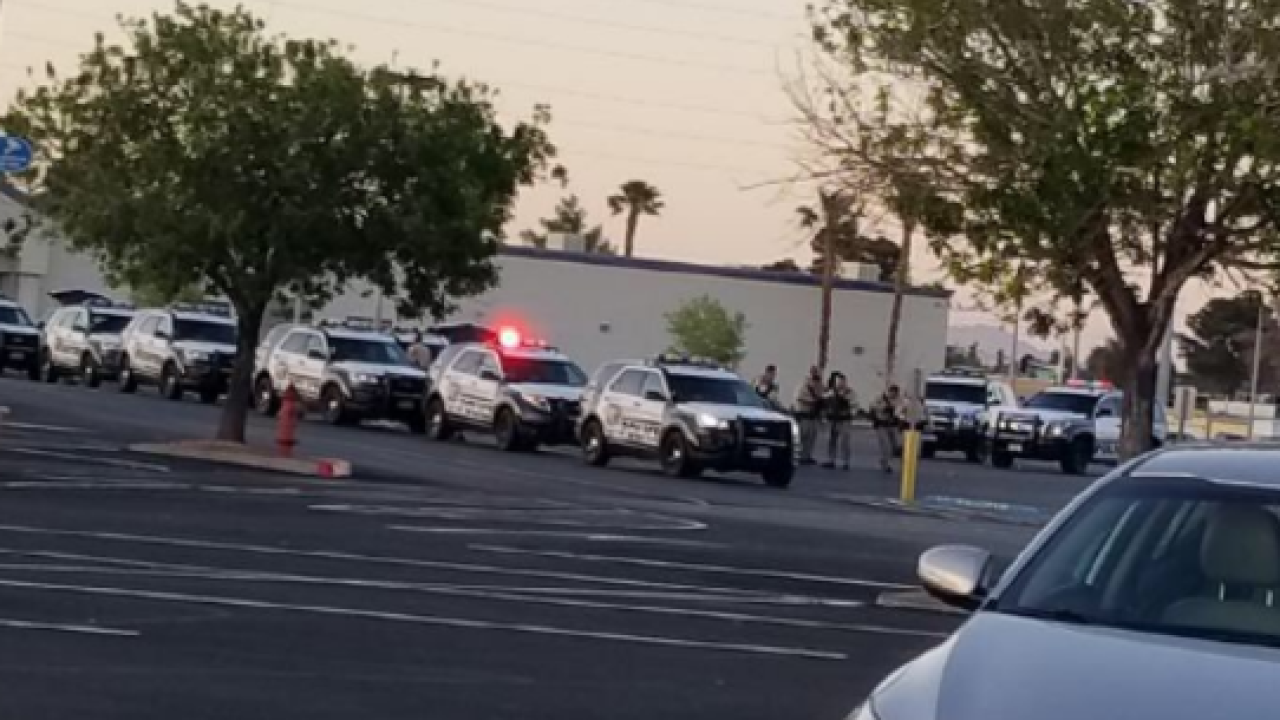 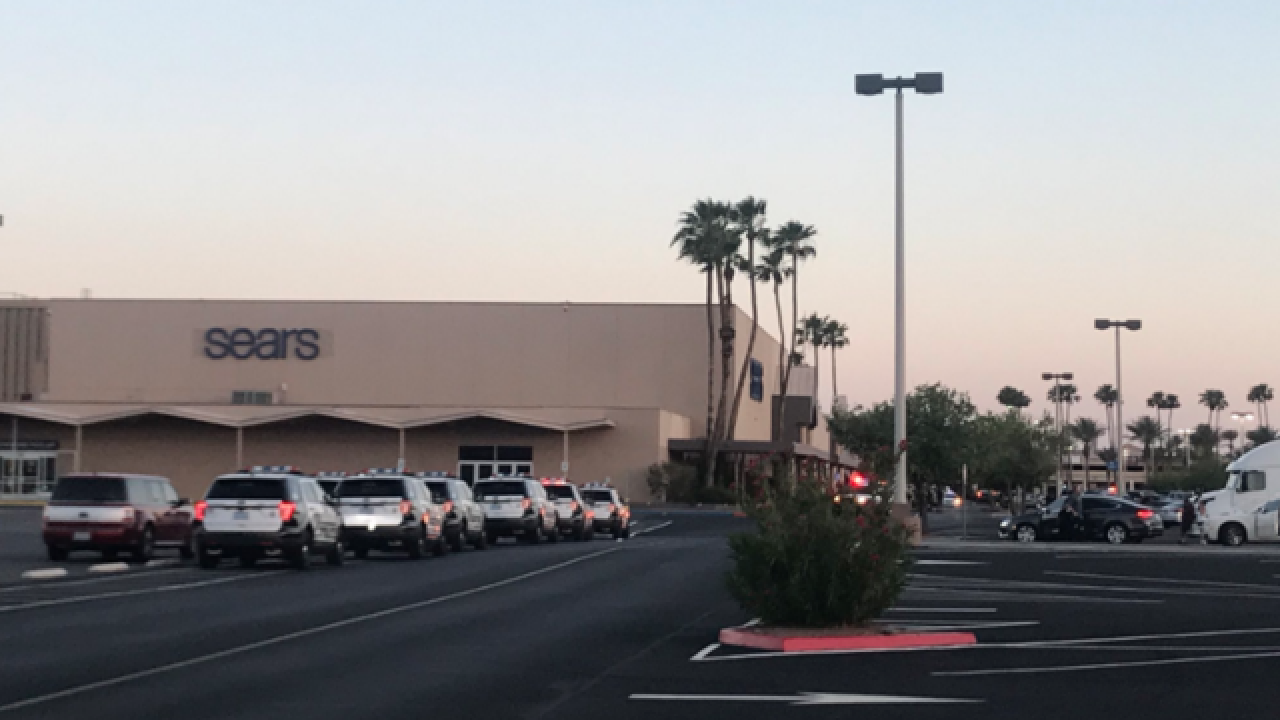 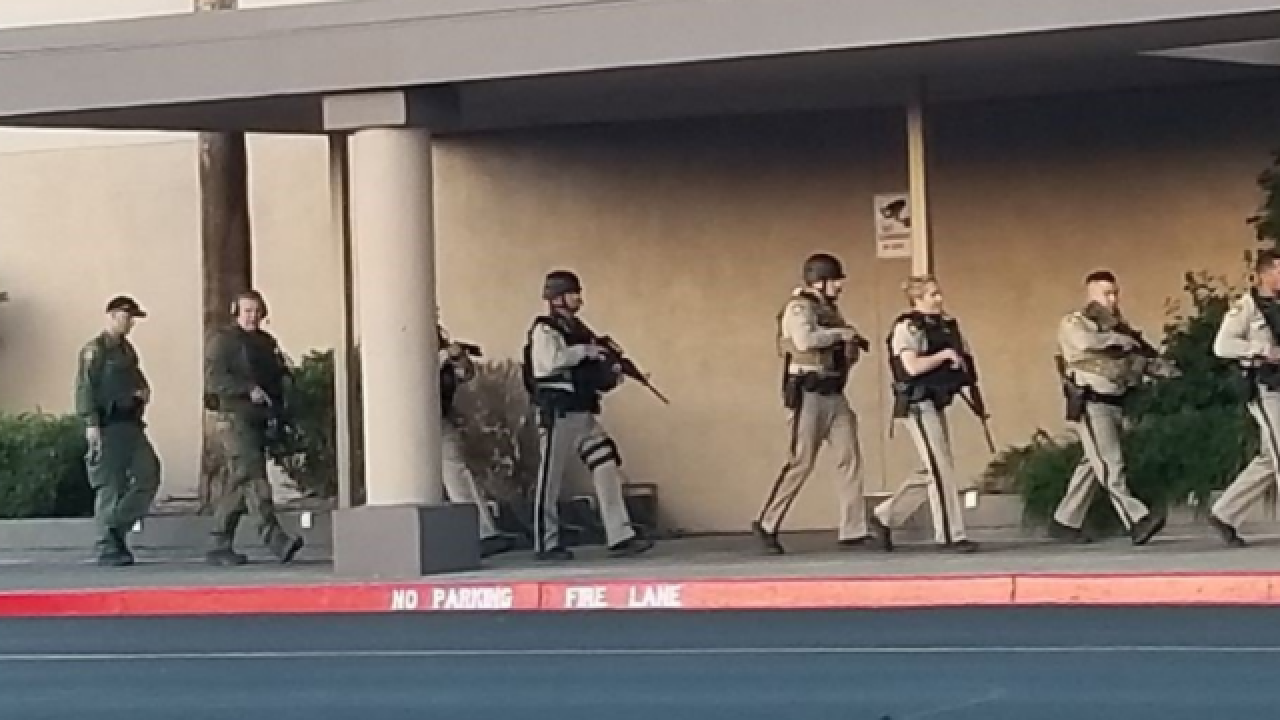 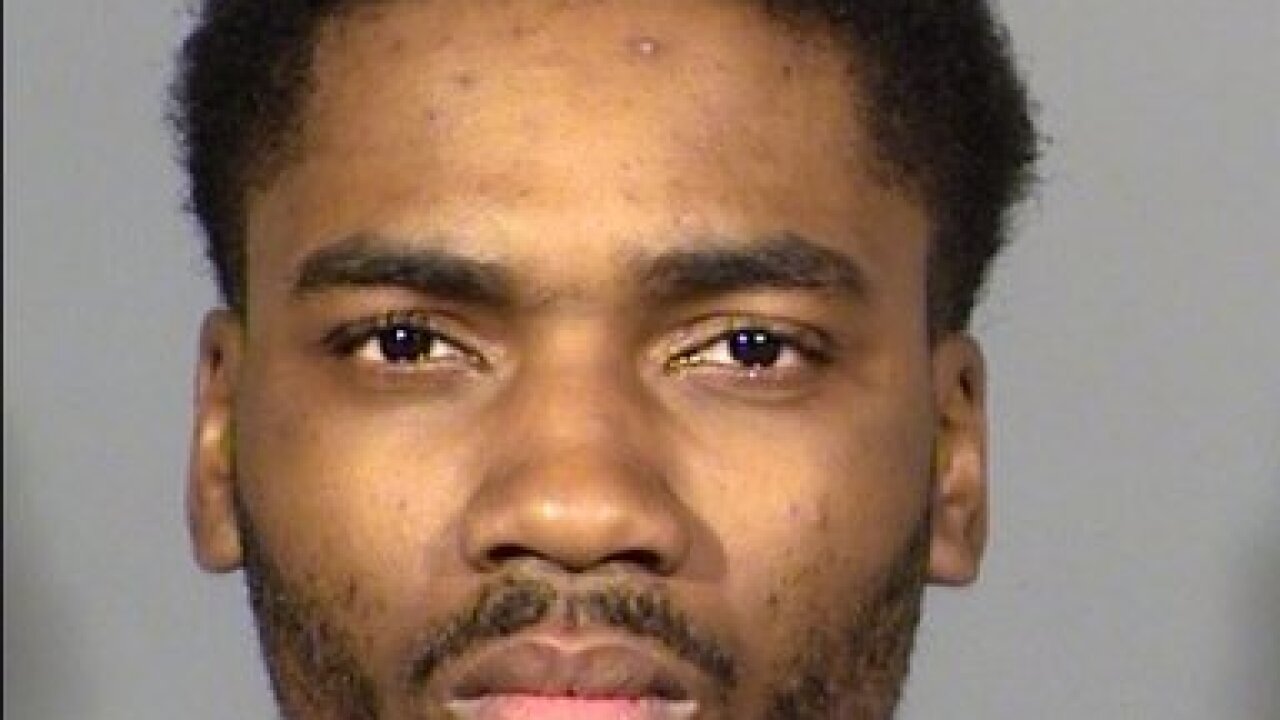 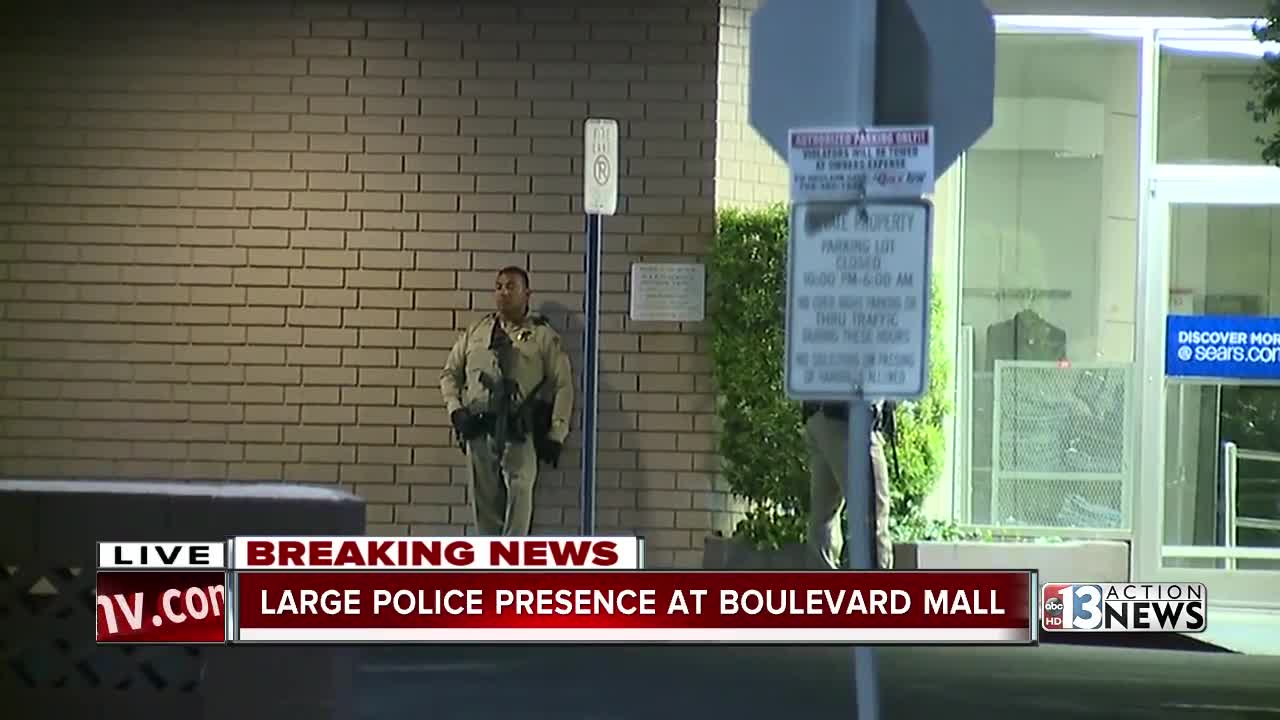 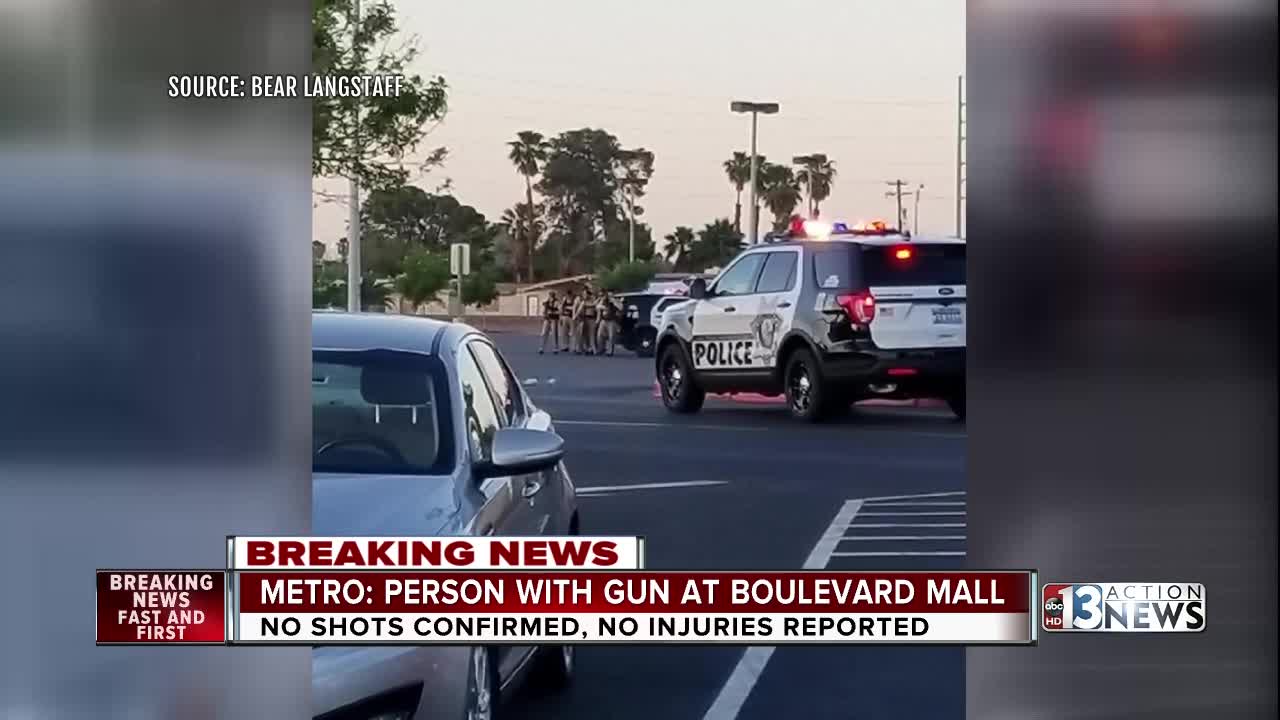 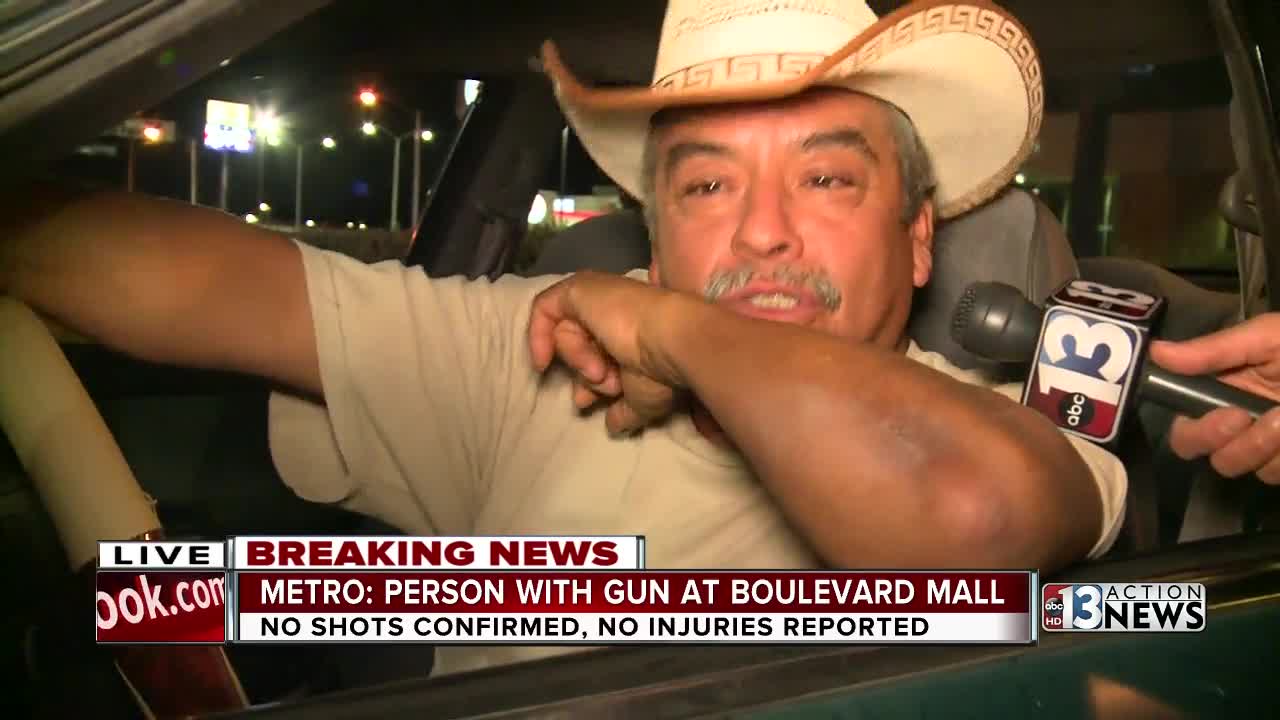 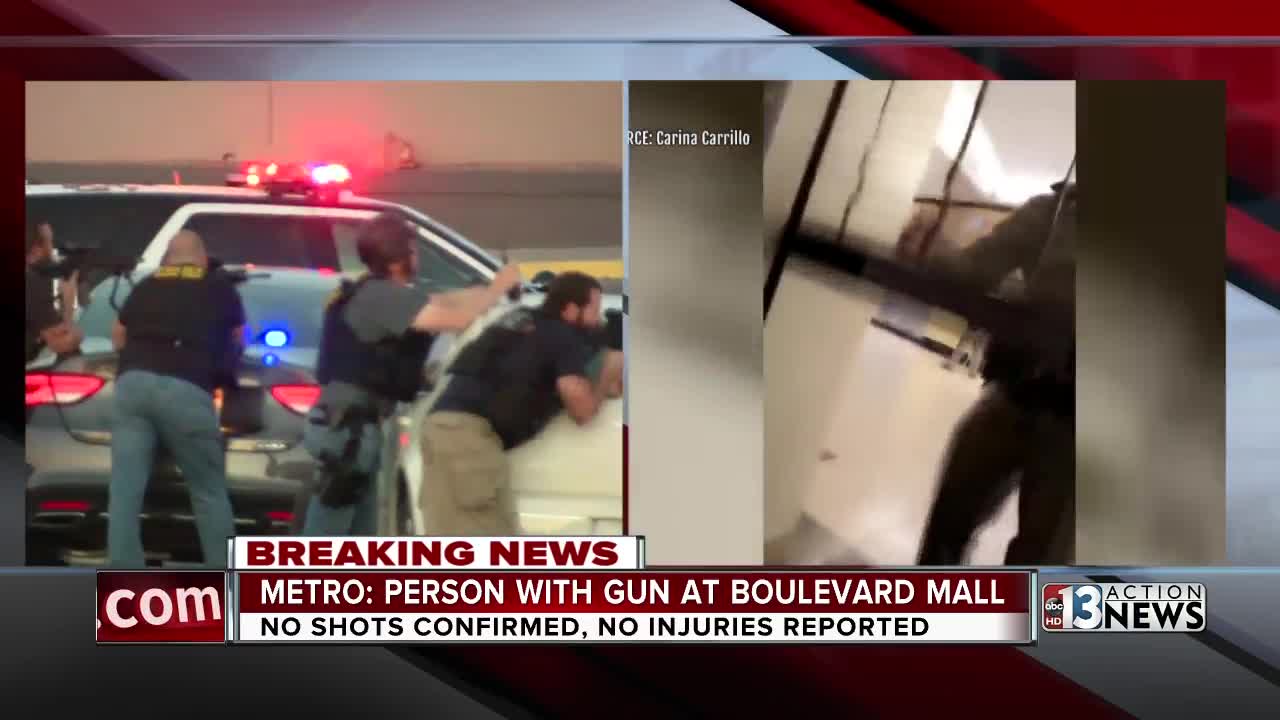 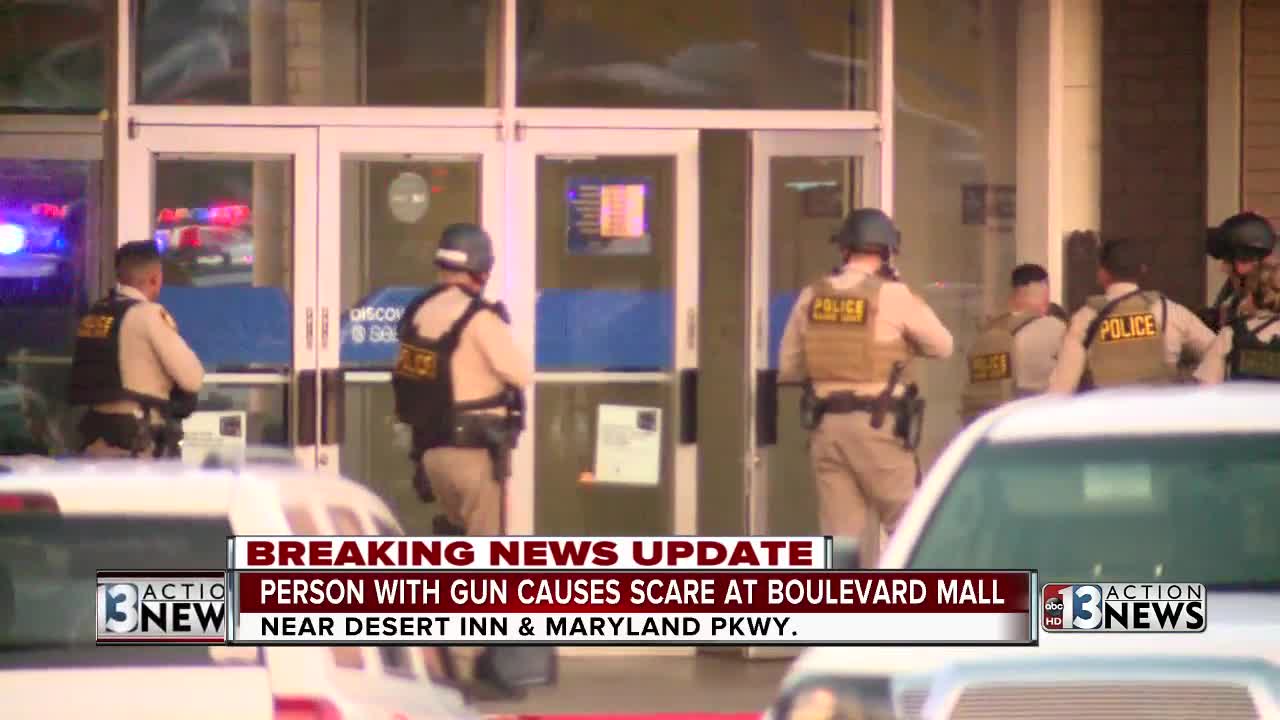 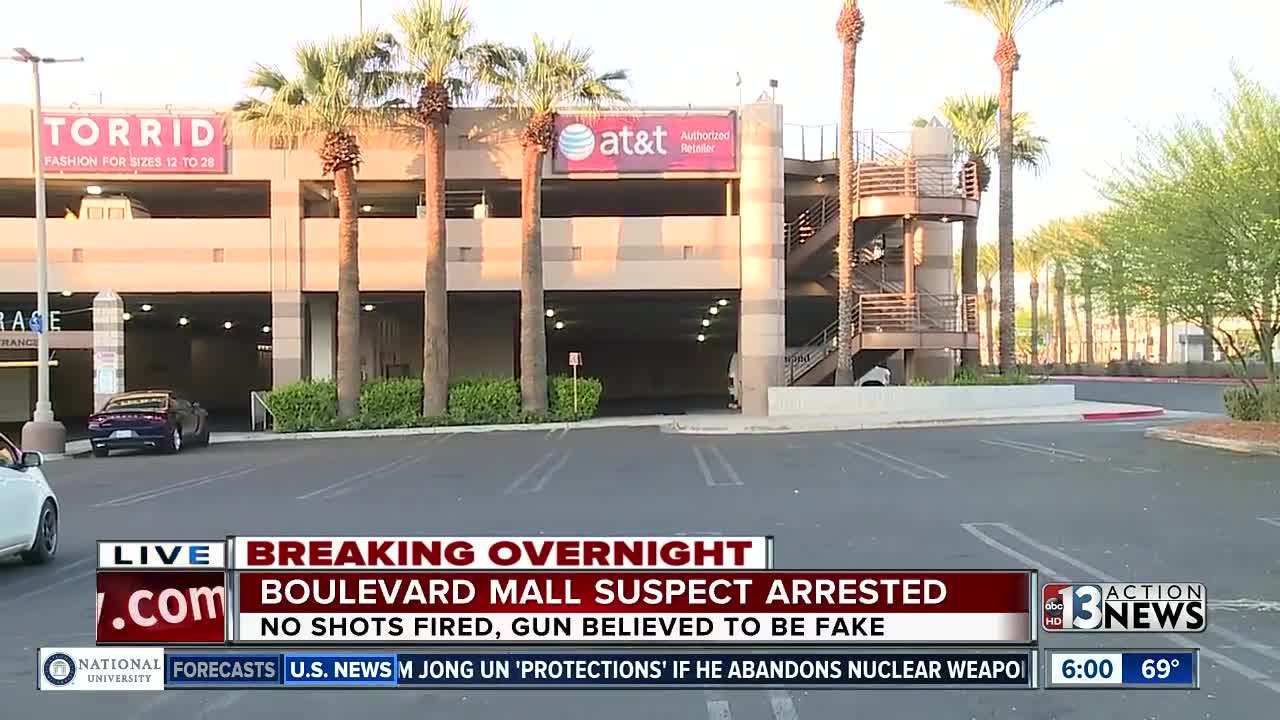 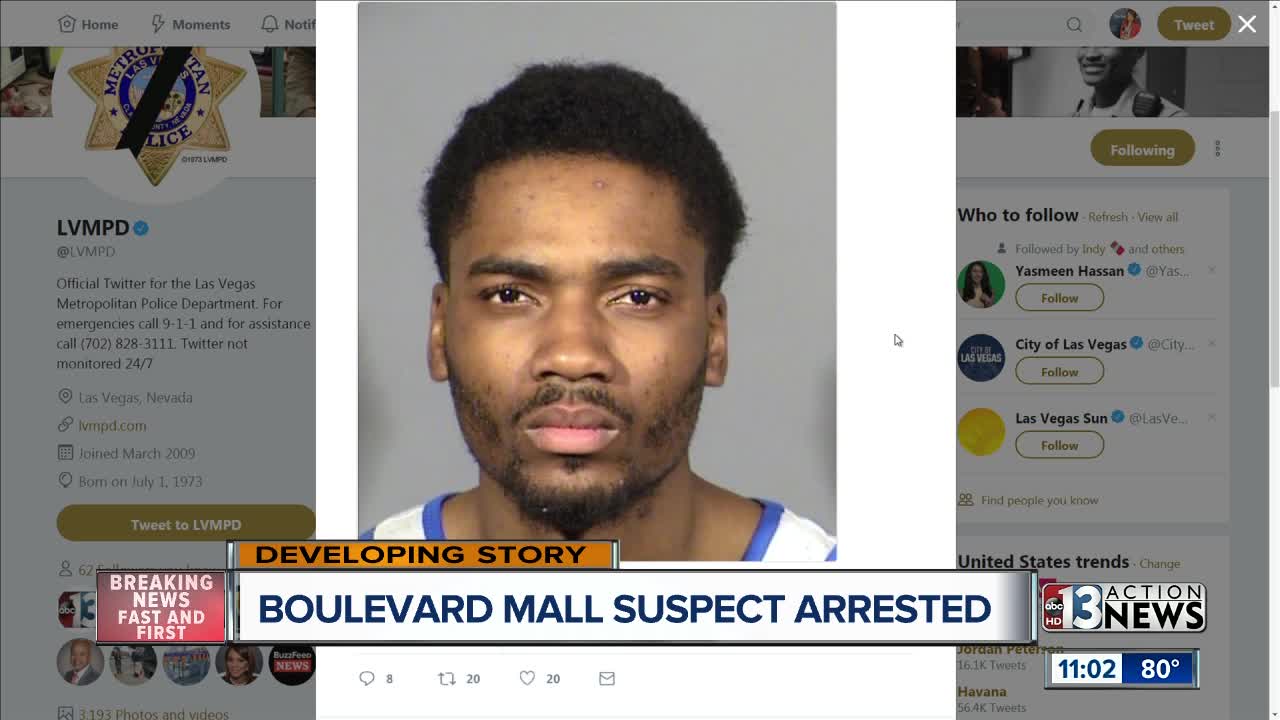 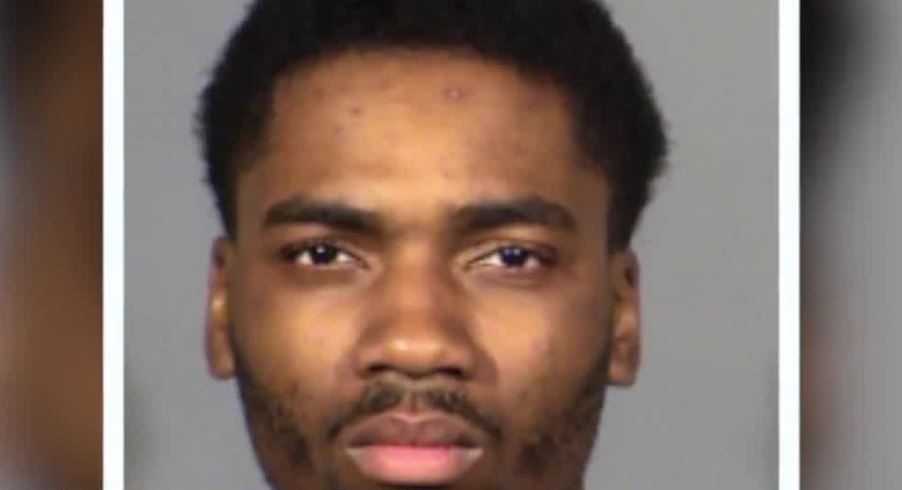 UPDATE MAY 21: A man accused of waving a fake rifle around at Boulevard Mall initially told police he was attacked.

Las Vegas police arrested Emile Hobson, whose legal name is Hopson, at his apartment after the incident. When police first arrived, Hopson feigned a seizure and medical units provided him treatment.

After he was cleared, Hopson asked police if it was about the mall. He told police said that the guy in the hoodie with the mask and rifle kicked his door in and tried to rob him. Hopson then said he ran outside and the masked man jumped over the rear wall before heading to the mall.

But multiple people in Hopson's apartment complex told police that they observed Hopson walking out of his apartment wearing a green hoodie and mask and carrying a rifle. They observed him jumping over the east wall and walk toward the mall between 6 and 6:30 p.m.

At the mall, an employee of a shoe store told police he heard someone yell, "There is someone with a gun." He looked outside the store and saw a man with a gas mask, afro and green hoodie point a rifle at him and then toward different employees at the store. The employee then locked up the store fearing he and his coworkers were going to be murdered, according to the report.

The manager of the shoe store also told police the man resembled Hopson and that he had been in the store every single day.

According to the report, when police were searching Hopson's apartment complex, fellow residents said they saw a man in the pool area leave clothing, a mask and rifle. The man also asked the residents if they wanted to buy his shoes. The resident said she was positive the man was Hopson.

Based on the evidence obtained, police arrested Hopson on a charge relating to committing an act of terrorism.

Police said after the 1 October shooting, "a reasonable and prudent person would, and several people did, believe a person wearing militant gear, a mask, carrying a rifle into a heavily populated place (such as the Boulevard Mall) and pointing said rifle at several people was doing so in order to commit a mass shooting. The mass pandemic caused by fleeing individuals could have very easily caused a great body of harm to the many patrons of the mall simply by the act of trampling alone."

UPDATE AT 10:45 A.M. MAY 18: Police have identified the man accused of carrying a fake rifle at Boulevard Mall.

25-year-old Emile Daren Hobson, whose legal last name is Hopson, faces a charge of committing an act of terrorism.

Detectives learned that the man pointed his rifle at numerous citizens while inside the mall. It was also determined that no shots were fired by the man and no one was injured. Additional information was provided by several citizens who came forward and gave vital information.

This information allowed detectives to recover a mask and a rifle that was determined to be a fake. These citizens also provided information that assisted detectives in identifying Hobson’s nearby apartment.

According to police, Hobson was arrested on April 28, less than three weeks ago, on a disorderly conduct charge. He also failed to register as a felon on Jan. 28 for a previous conviction of armed robbery in Illinois. Also on Jan. 28, he received two citations for jaywalking.

UPDATE AT 6:44 A.M. MAY 18: Las Vegas police sent out a tweet on Friday morning, saying that their PIO (Public Information Office) will release more information about the man who was arrested after Thursday night's incident at Boulevard Mall.

Las Vegas police responded to reports of a man with a mask and a gun at the Boulevard Mall on Maryland Parkway shortly after 7 p.m. May 17. The mall was evacuated and police officers searched the mall three times to make sure no one was in the mall with a gun.

Shortly after 11:30 p.m., police notified the press that someone had been placed under arrest. However, they did not say where the person was arrested. They did say that the person was carrying what appears to be a fake gun.

Check back for updates.

UPDATE AT 11:41 P.M. The suspect has been arrested and the gun and mask have been recovered, according to police. The gun appears to be a fake gun. The identity of the suspect will be released Friday morning.

RELATED: In a post 1 October world, police response is heightened

UPDATE AT 8:20 P.M. Police say they received calls about a person with a gun at the Boulevard Mall on Maryland Parkway. No injuries have been reported and police say no shots were fired. The mall has been evacuated while officers make sure the person with a gun is not inside the mall.

Deputy Chief Chris Jones told the media during a press briefing that video has been obtained of a person wearing a mask and carrying a long gun. At this time, no one has been arrested. Police have brought in police dogs to help with the search.

The incident began shortly after 7 p.m. Road closures may be in effect.

Watch video from inside the Boulevard Mall below

As the news first broke earlier tonight, thoughts of 1 October came to mind. But when it comes to mall shootings in Las Vegas there have been a few isolated incidents. In July 2014, one person was injured during a shooting at the Fashion Show mall. In that case, police reported a scuffle broke out and one man was shot in the neck. There was another shooting in 2016 in the parking lot at Fashion Show mall.

This occurs at a crucial moments for Boulevard Mall. The more than 50-year-old shopping center was once the premier mall in the city but fell into disrepair. It was sold in 2013 to developer Roland Sansone for $54.5 million and then embarked on a $25 million renovation project.

It’s had some near-term ups and downs. After the SeaQuest Aquarium announced in 2016 it would open, Macy’s and J.C. Penney both said last year they would close. In 2018, Sansone announced the Galaxy Theater would open in the fall and Anthem Blue Cross Blue Shield will open in the second story of the former Macy’s space.

There is a heavy police presence at Boulevard Mall. There are reports of an active shooter. Police are reportedly checking each business inside of the mall.

13 Action News has a crew on the scene. We will update this story as soon as we have more information. Video of early report.

Facebook live video from Mahsa Saeidi at the scene

We have a crew at the scene to gather more info. Updates will be posted here >> https://t.co/A5CEhzEBBr pic.twitter.com/19IxKgmsx9