A notice from a local apartment complex is causing a stir on social media telling tenants that rent is still due despite being in the midst of the coronavirus outbreak. Jeremy Chen reports. 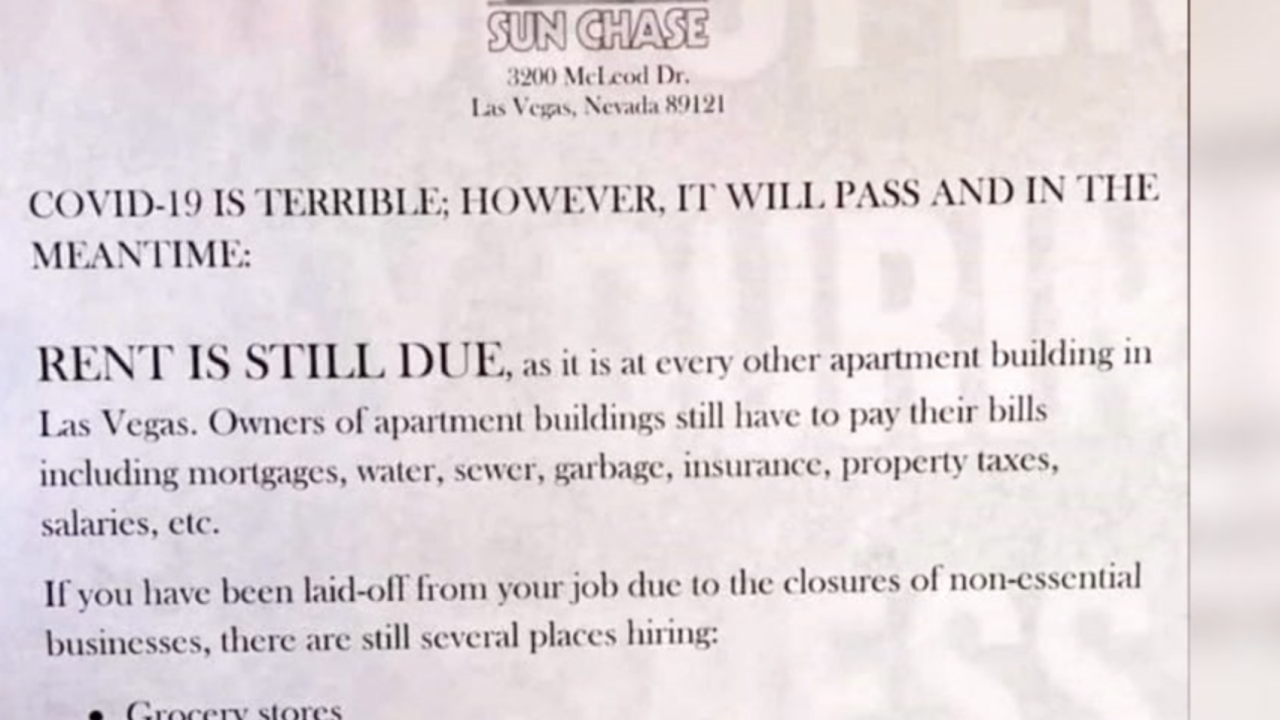 LAS VEGAS (KTNV) — A notice from a local apartment complex is causing a stir on social media telling tenants that rent is still due despite being in the midst of the coronavirus outbreak.

"Rent is still due." That's the message in a notice from the owners of the Sun Chase Apartments.

It was posted during this current economic crisis spurred on by the coronavirus pandemic, and it was shared on social media, creating anger with some people, including tenants considering it tone-deaf.

The complex responded on Facebook writing that rent is still due everywhere and that the owners still have their own bills to pay, claiming the online criticism is coming from people not even living at the complex.

"Its more of a way to scare someone than actually to work something out, and I believe that is what this notice is attempting to do," Al Lasso, a trial attorney, said.

He says there was poor communication on the part of the owners. He understands they also have their own bills to pay but thinks they should work with tenants who are having a hard time due to being laid off and unemployed.

"Try to come to an agreement because we're fighting this together, and if we do things like this, nobody is going to win in the end,' Lasso said.

Some tenants declined to speak on camera for fear of being evicted even though Gov. Sisolak stopped evictions for 30 days starting on March 17.

Attempts were made to reach out to the owners by phone and email, but 13 Action News didn't hear an answer by the deadline.

The complex did write on Facebook; it was not evicting anybody, and due to the fluid situation is working with tenants on several options.

Lasso says right now, while you cannot be physically evicted from your property, there are still things to keep in mind.

Lasso also says evictions can still be filed in court, just not carried out yet. It can also hurt credit scores or renting backgrounds.

Unless the state issues additional directives or financial relief, the law still says rent still needs to be paid eventually.

"Technically, your rent is still due, so you have to take the initiative to try to work something out before it gets to that problem," Lasso said.