Clinton holds a 41 to 40 percent lead over Trump, according to a poll of 750 likely voters taken between July 29 and 31. Ten percent of voters polled are supporting Libertarian candidate Gary Johnson, with five percent undecided and four percent backing another candidate. 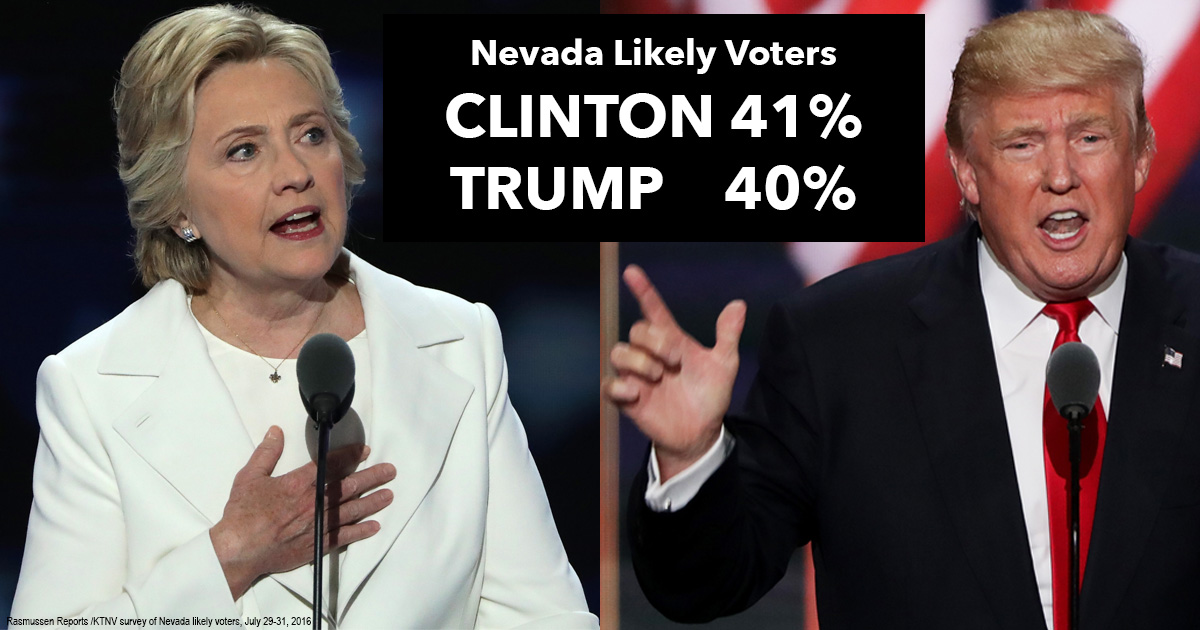 The results indicate a positive post-convention bump for the Democrats, as a previous KTNV-TV 13 Action News/Rasmussen Reports poll taken last week after the Republican National Convention showed Trump and Heck with larger leads in Nevada. Cortez Masto did not attend the convention.

Rasmussen polls historically tilt Republican, according to a FiveThirtyEight ranking of polling groups.

Voters still have strong negative opinions of both Trump and Clinton, with both candidates seeing double digit negative approval ratings. Forty-two percent of voters hold a very or somewhat favorable opinion of Trump, with 55 percent saying they hold a somewhat or very unfavorable opinion.

It’s a similar case for Clinton, with 41 percent of voters in support and fifty-seven percent opposed to the former Secretary of State. Johnson has a 27 to 28 favorable-unfavorable split among voters, with 45 percent of poll respondents saying they’re unsure or don’t know who he is.

Trump and Clinton supporters still largely fall into the same demographic categories as previous poll results. Trump commands leads among men, white voters and those over 40, while Clinton attracts a majority of black and Hispanic voters, self-identified moderates and female voters.

Heck leads the race by a 42 to 41 margin, with 11 percent of voters undecided. Last week’s KTNV-TV 13 Action News/Rasmussen Reports poll showed Heck with a nine-point lead over Cortez Masto.

Voters hold generally favorable views of the two major Senate candidates —  Heck has a 45 to 41 percent favorability split, with voters viewing Cortez Masto with a similar 43 to 42 percent split.

The full crosstabs and demographic breakdown of the poll are available here.