KTNV/RASMUSSEN POLL: Clinton pulls ahead of Trump in Nevada as early voting starts

Clinton holds a 46 to 42 percent lead over Trump, with five percent supporting Libertarian presidential candidate Gary Johnson and six percent unsure or supporting another candidate. The poll of 826 likely voters was conducted Oct. 20 to 22, immediately following the third presidential debate at UNLV, and has a 3.5 percent margin of error.

The former Secretary of State’s close lead over Trump reflects other recent polls of the state, and marks Clinton’s largest lead in the four KTNV-TV 13 Action News/Rasmussen Reports poll conducted since July. Trump most recently posted a 42 to 39 percent lead over Clinton in the last Rasmussen poll of Nevada conducted in mid-September. 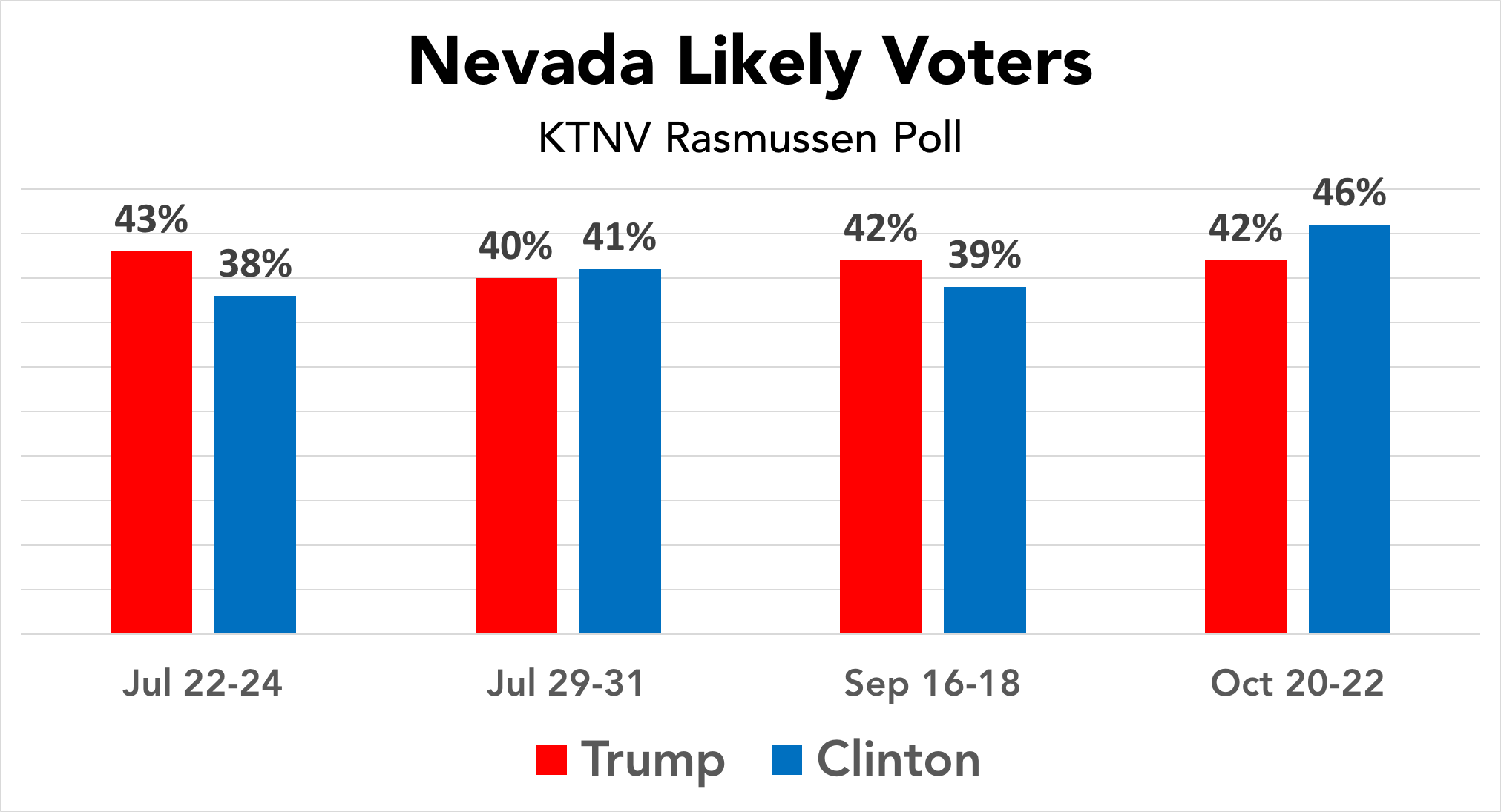 Rasmussen polls historically lean Republican, according to a FiveThirtyEight ranking of polling groups.

Among Hispanic voters, Clinton led Trump in support by a 61 to 32 percent margin, although other national polls show much higher support for Clinton.

The poll indicated that Trump trails Clinton by ten percentage points in populous Clark County, one point in Washoe County and leading in rural areas of the state by a 56 to 34 percent margin.

Both presidential candidates are viewed negatively by a majority of Nevadans, though Trump is slightly more unpopular.

President Barack Obama remains popular in Nevada, with 55 percent of poll respondents reporting a favorable opinion of the president and 43 percent holding an unfavorable opinion.

Nevada’s Republican Gov. Brian Sandoval is also popular across almost all demographic lines, with 62 percent of respondents holding a favorable opinion of the governor and 28 percent saying they have an unfavorable opinion.

Early voting in Nevada began on Saturday and runs through Nov. 4. More than 111,000 ballots have been cast so far in the state, including absentee ballots.

The KTNV-TV 13 Action News/Rasmussen Reports poll was conducted with a 95 percent level of confidence and a mix of 75 percent automated voice polling and 25 percent online responses. A full demographic breakdown of the poll results is available here.

KTNV will release additional polling results on Nevada’s competitive U.S. Senate race, updates on ballot questions legalizing recreational use of marijuana and universal background checks on gun sales as well as the popularity of the recently approved deal to raise hotel room taxes to partially finance a domed stadium that could attract the Oakland Raiders to relocate to Las Vegas.