Companies owned by Sheldon Adelson contributed more than $200,000 to a wide swath of legislators between the January announcement and the last campaign finance reporting deadline in June.

Billionaire casino executive Sheldon Adelson’s companies have ramped up campaign contributions to Nevada lawmakers since the January announcement of a partially-publicly funded stadium project in Las Vegas designed to attract the Oakland Raiders.

Companies owned by Adelson contributed more than $200,000 to a wide swath of legislators between the January announcement and the last campaign finance reporting deadline in June, according to a KTNV review of campaign finance disclosures.

Overall, sitting members of the Nevada Legislature have in total accepted more than half a million dollars from Adelson since 2008, with donations going to roughly three-quarters of lawmakers. Adelson is the CEO and chairman of the Las Vegas Sands Corporation, which operates The Venetian hotel-casino and the Sands Expo and Convention Center.

Lawmakers, including Republican Assembly Majority Leader Paul Anderson, say increased donations are a presidential year trend that isn’t unique to the Sands or any other

“Across the board, you're seeing contributions up,” he said. “And so if you just take one entity, you can certainly start to paint a picture, but I don't think it's accurate."

Anderson added that with Republicans taking 10 new seats in the state Assembly during the 2014 midterm elections, donations including from the Sands have increased with more districts in play than ever before.

Donations to legislators have increased significantly since developers led by Adelson presented the initial plan for a $1.9 billion stadium to a state infrastructure committee in January. Legislators received $225,000 from companies led by Adelson in 2016, more than double the total contributions given by the company in any other recent year.

That committee in September recommended a proposal to Nevada Gov. Brian Sandoval that included a modest increase in the Clark County hotel room tax to finance $750 million in construction costs, with the remaining cost covered by Adelson and the Oakland Raiders.

The committee also called for a similar room tax hike to help fund an expansion to the Las Vegas Convention Center, and a small sales tax increase to increase funding to Clark County police. Sandoval has publicly endorsed all three ideas.

Any Nevada tax increase requires a two-thirds vote of the Nevada legislature or Clark County Commission, and Sandoval (who has received at least $330,000 from Adelson and the Sands through his campaign and associated political action committees) has pledged to call the legislature into session early in October.

At least 40 lawmakers have taken campaign contributions from the Sands, with the majority of funds going to Republicans. 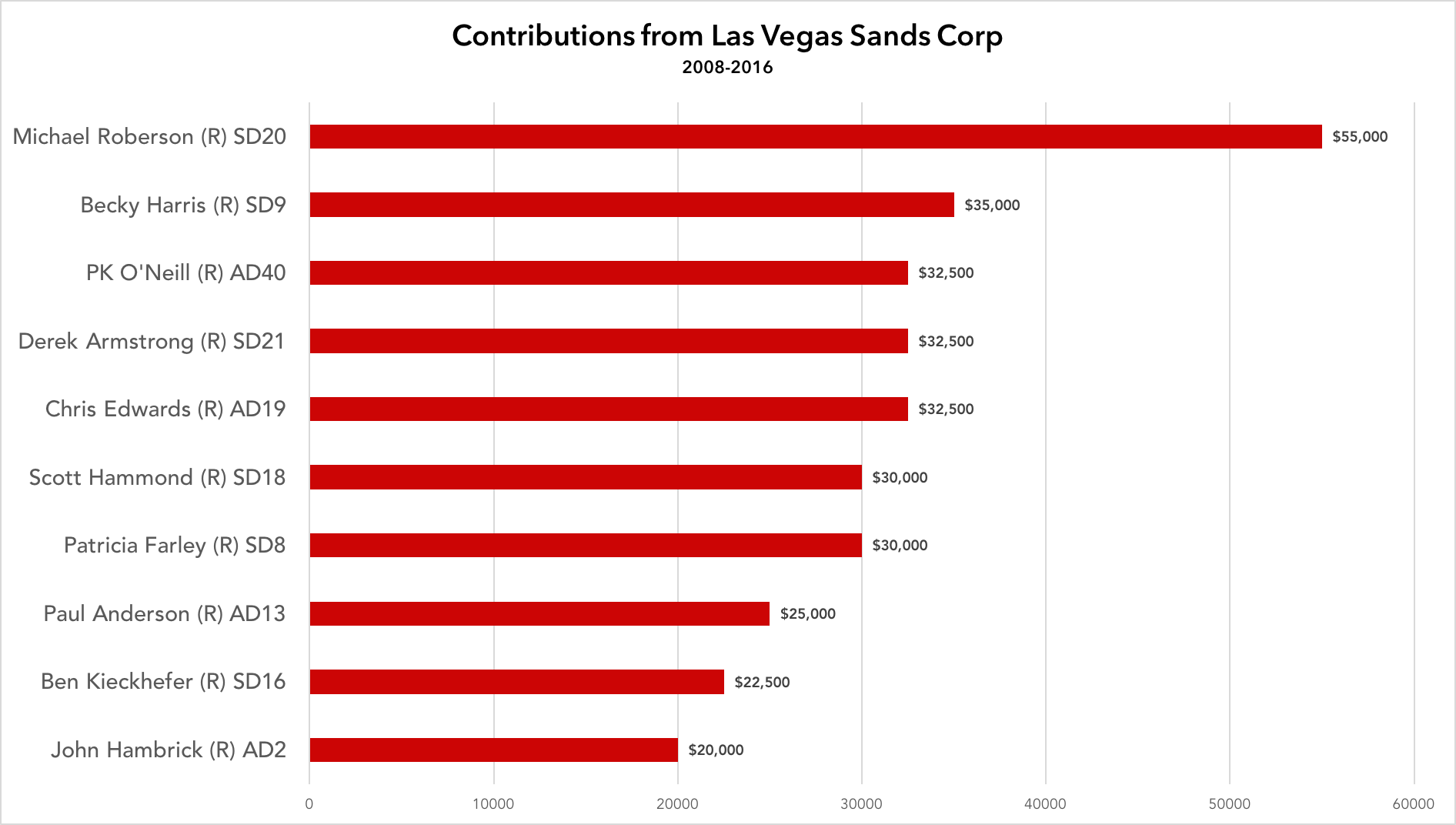 Democrats have received $71,000 from the company, primarily in the past two years.

Nevada State Senate Majority Leader Michael Roberson has been a major recipient of Sands donations since first running for office in 2010, receiving $55,000 from the company.

Legislators who haven’t taken donations from the Sands are mostly Democrats, and include the following:

Nevada law prohibits contributions to individual candidates over $5,000 for primary or general elections, but there are no limits on donations to political action committees or political parties.

Most recently, the company is largely bankrolling a group supporting a ballot question to deregulate Nevada’s energy market, donating $675,000 to Nevadans for Affordable, Clean Energy Choices through June.

Nevada’s next campaign finance reporting deadline is Oct. 8, and covers the period between June 10 and Oct. 14.

To see all donations made by the Sands since 2008, click here.