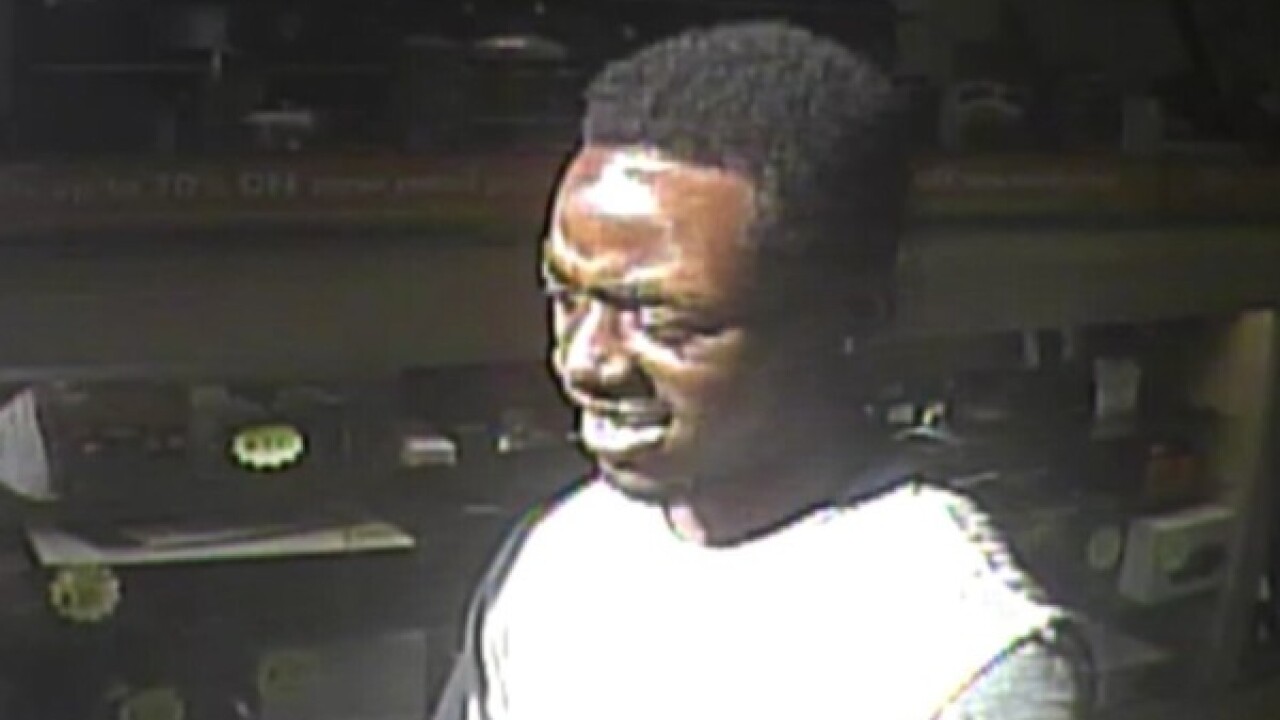 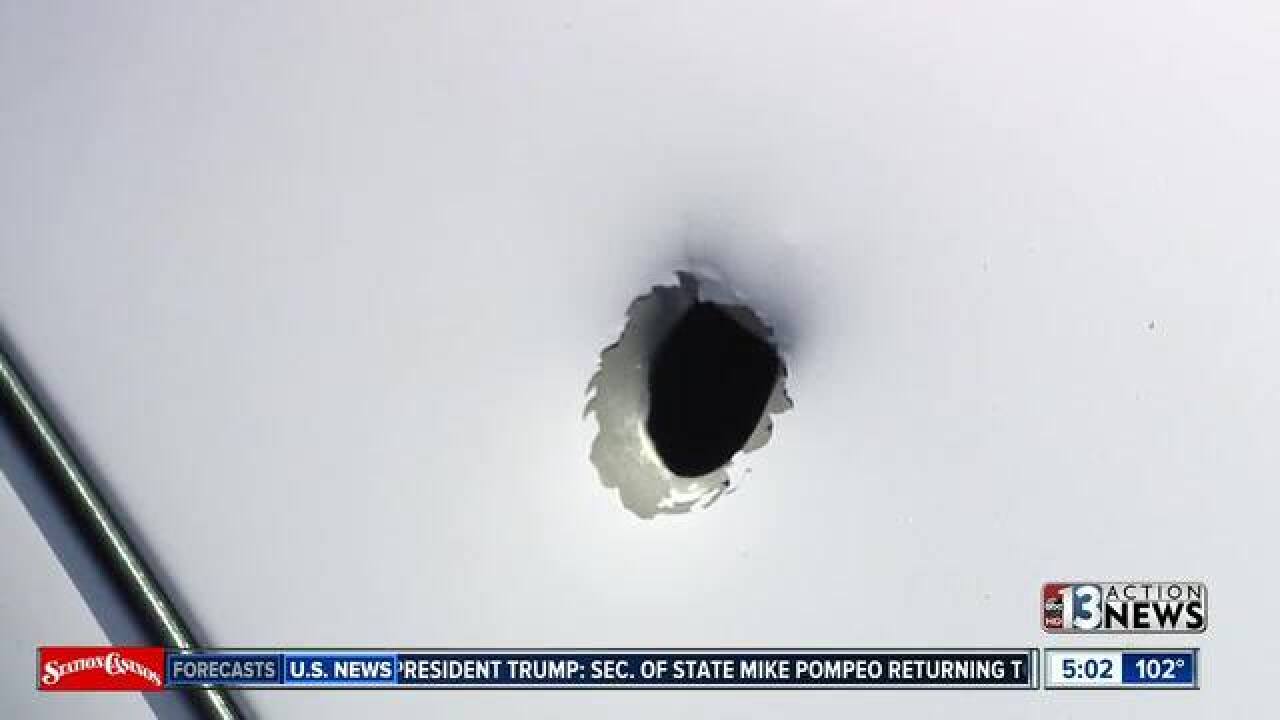 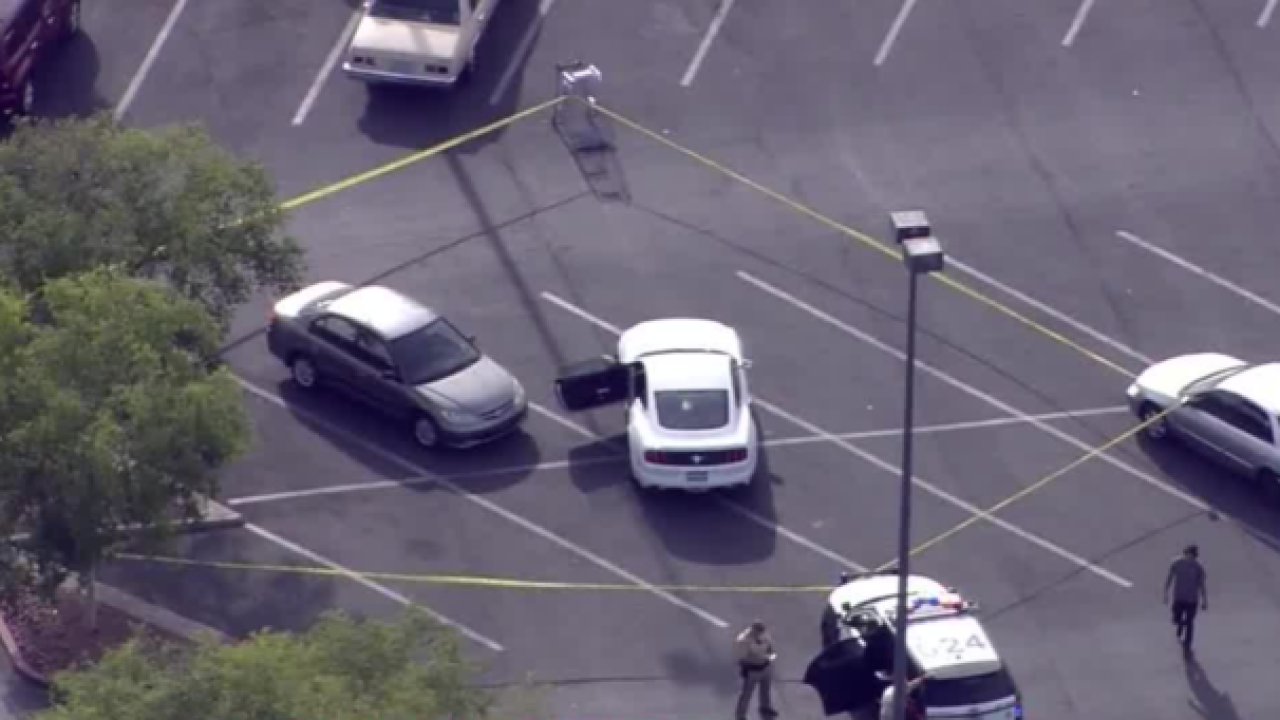 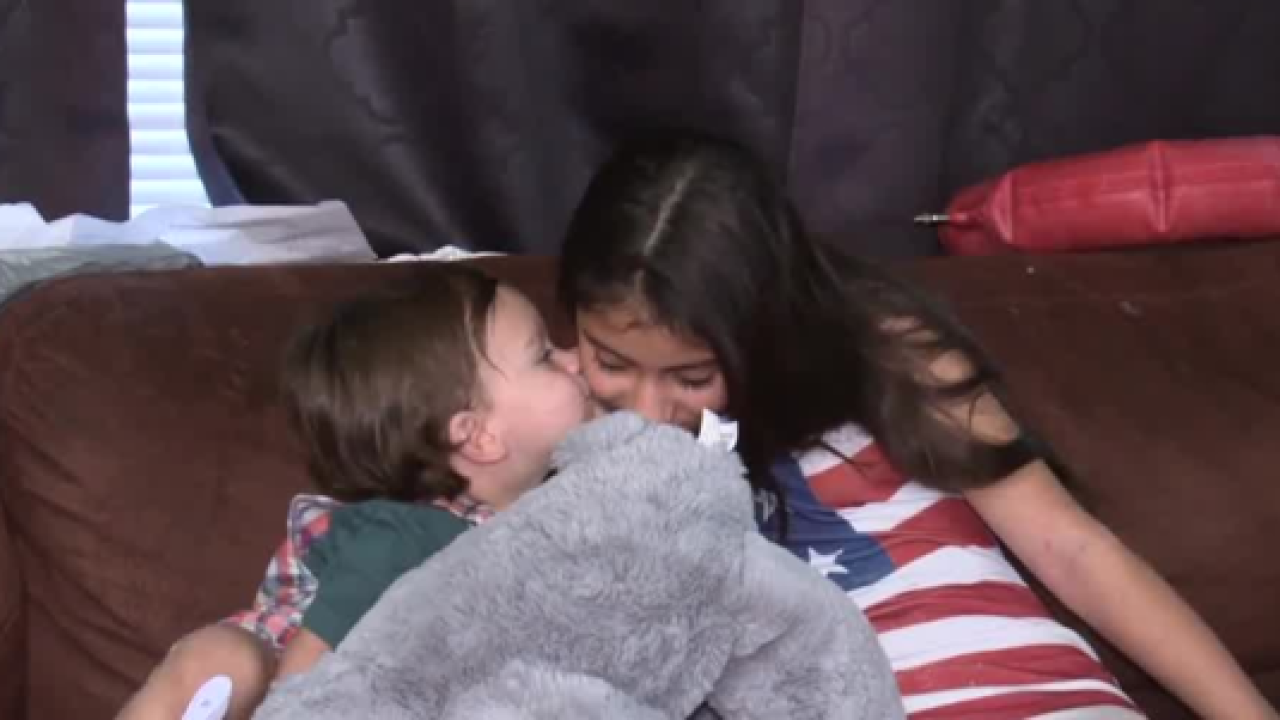 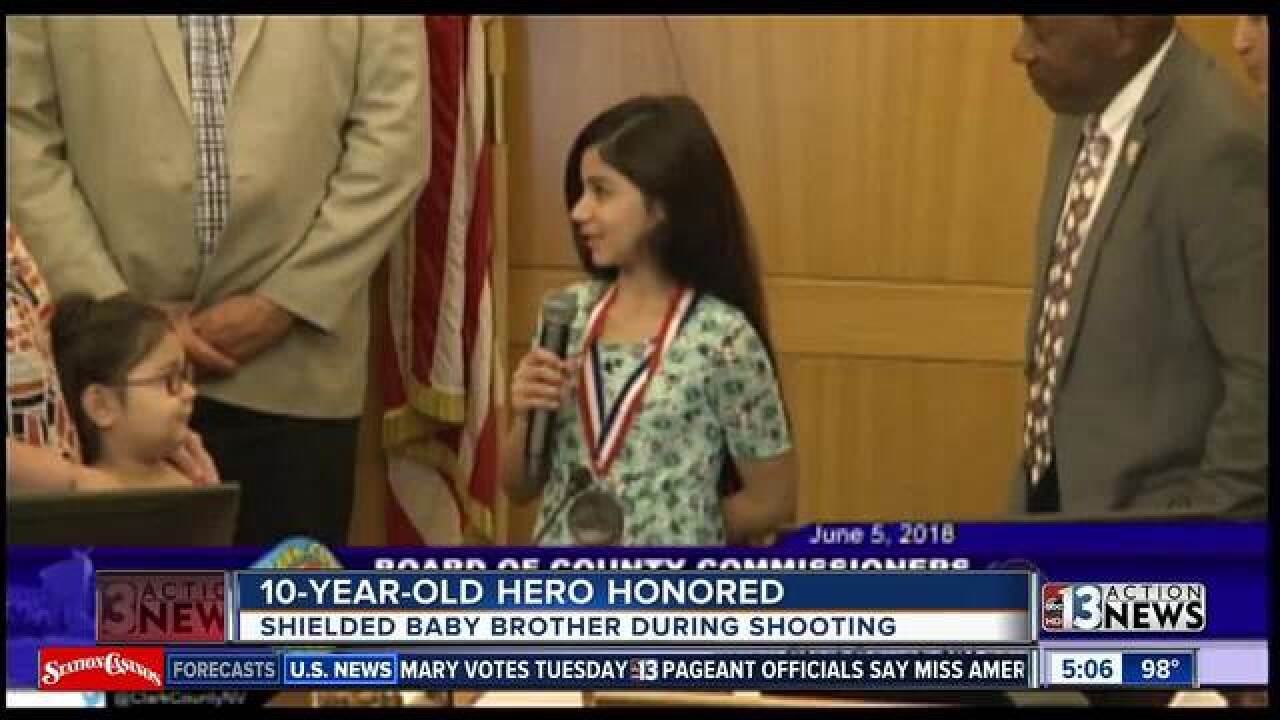 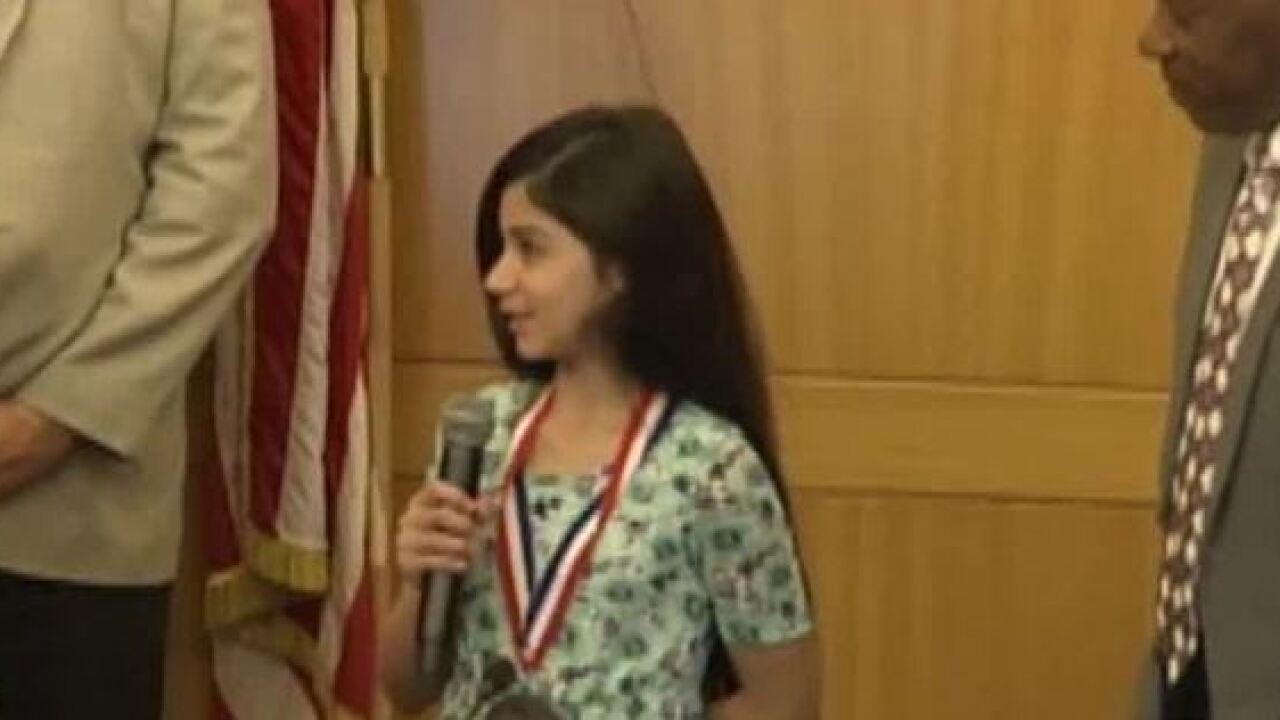 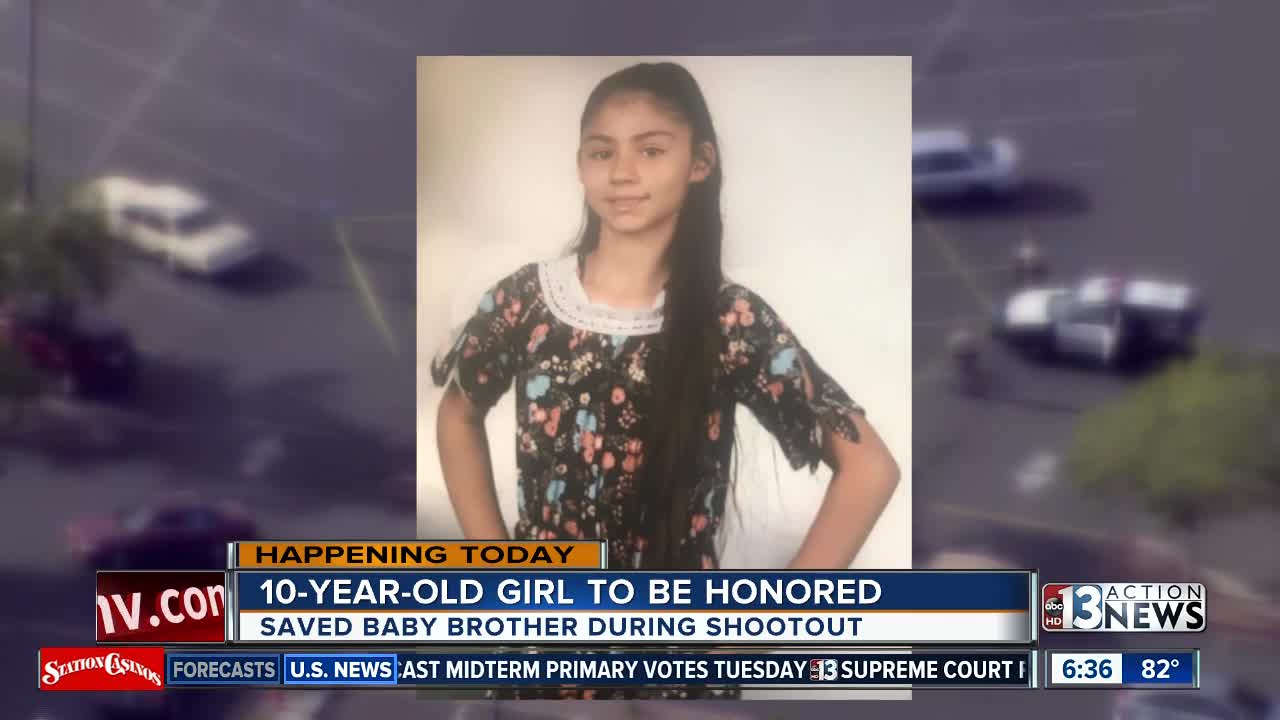 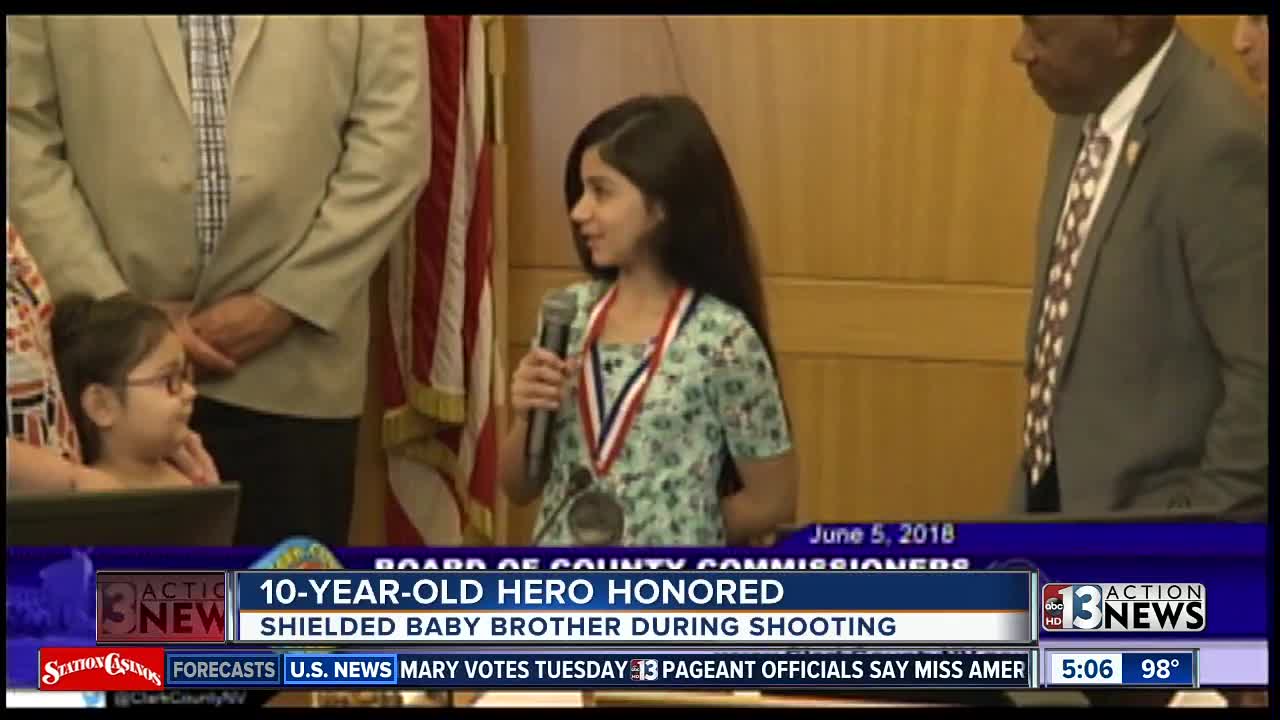 UPDATE JUNE 5: The 10-year-old girl who shielded her baby brother from gunshots was recognized by the Clark County Commission on Tuesday.

Aaliyah Inghram and her family were finishing up a shopping trip at a strip mall in May when suddenly two men started shooting each other in the parking lot near Nellis Boulevard and Stewart Avenue.

Aaliyah immediately covered her 18-month-old brother and was hit by a stray bullet.

Aaliyah was given a medal for her heroism and June 5 will also be declared Aaliyah Inghram Day by the county.

Aailyah's mother Samantha said her daughter does continue to struggle with trauma from that day and is currently seeing a trauma therapist.

UPDATE MAY 11: Samantha Tygret has 3 children and another one on the way. She was shot in the shoulder area earlier this week when two men began shooting at each other near Nellis Boulevard and Stewart Avenue.

10-year-old Aaliyah was also shot as she was protecting her younger brother who was in a car seat. She was shot by the same bullet that injured her mother.

Samantha says that it has been difficult not being able to change her son's diaper or help her other children. But, they are moving on. Aaliyah could go back to school as soon as next week.

A GoFundMe has been set up to help the family.

UPDATE MAY 10: Detectives have arrested 18-year-old Tyrone England and 20-year-old Zachary Hewitt in relation to the shooting that occurred near Nellis Boulevard and Stewart Avenue.

The men were found in the 700 block of West Lone Mountain Road and taken into custody. They have since been transported and booked into the Clark County Detention Center where they both face charges of attempted murder, battery with deadly weapon (firearm), assault with a deadly weapon (firearm), discharge a firearm into vehicle, and conspiracy to commit murder.

Great work by detectives! Two suspects were arrested in the triple shooting that occurred on May 8 near Nellis Blvd and Stewart. https://t.co/wmxBbLxRvy #LVMPDnews pic.twitter.com/Xlh5LA8PfW

UPDATE 11 P.M. MAY 9: A 10-year-old girl sprung into action to save her baby brother when they were caught in the crossfires during a shootout in a strip mall. Aaliyah Inghram told 13 Action News when she heard gunfire she knew she had to do something.

" I was thinking I have to save the baby. I don't want him to get hurt."

Using her body as a sheild she hunched over 18 month old Adrian's car seat as her mother tried to call for help and get everyone out of the car.

" It was the scariest thing I ever went through," said her mother Samantha Tygret. "Because I felt like I couldn't protect them all fast enough.

When asked if she thinks police should be doing more to curb crime; Tygret said that police can only do so much and people have to have more regard for human life.

UPDATE 6:30 P.M. MAY 9: A Las Vegas mother stuck in the middle of the strip mall shooting says a bullet pierced her car.

Robinson was caught in the crossfire and had a bullet fly through her car landing just inches away from her son who was in the passenger seat.

"If it was not for god somebody would have gotten killed and the way that bullet came through my car it probably would've been us," Robinson said.

Volunteers from Rebuilding Every Community Around Peace canvassed the area near Nellis and Stewart Wednesday.

UPDATE 4:30 P.M. MAY 9: Las Vegas police released a photo of a man wanted in a shooting Tuesday afternoon near Nellis Boulevard and Stewart Avenue.

Police said two men got into an argument with several individuals as they exited a business. During the argument, one of the suspects pulled out a handgun and began to shoot at the victims.

The man continued to shoot at the victims as they crossed a busy street and into a business parking lot where bystanders were injured.

UPDATE 7 P.M. MAY 8: Police now say there were four people injured in the shootout and one, a 10-year-old girl, has non-life-threatening injuries. One of the people injured was one of the shooters.

They also believe the shooting may have been gang-related.

Officers say over 20 rounds were fired by two men and 3 victims are currently at Sunrise Hospital in unknown condition.

They also say at one point one of the victims ran into a neighboring Walmart and the area around both that and Denny's has been blocked off.