Police have released the mug shot of 22-year-old Rayvon Berton, the man arrested for assault with a deadly weapon and carrying a concealed weapon at Town Square shopping center.

UPDATE JULY 9: Police have released the mug shot of 22-year-old Rayvon Berton, the man arrested for assault with a deadly weapon and carrying a concealed weapon at Town Square shopping center on July 6. 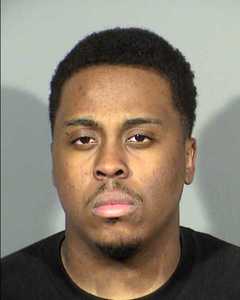 ORIGINAL ARTICLE: Las Vegas police responded to Town Square on Las Vegas Boulevard on Friday night after receiving reports of an active shooter at around 9:12 p.m.

At around 9:45 p.m., police informed the media that the reports of a shooter were false. Police say that a fight broke out but no shots were fired and no one has been injured.

#UPDATE Just spoke with Las Vegas police on scene of mall on lockdown. They say there were reports of gunshots. NOT confirmed. 1 person is detained. Police currently investigating. Update in 15 min from police. Witnesses describe fight outside mall area. @KTNV pic.twitter.com/ckGiBsqJMj

Several businesses were put on lockdown, according to people who were posting on social media.

Omg!!! There’s an active shooter at town square & I’m stuck in the Apple store!!!! Just needed to tell yall so someone can know my whereabouts

I'm inside a theater at Town Square and we're on lockdown. Security told us there was an active shooter. Didn't give us any more details.

Police told the media during a briefing at approximately 10:45 p.m. that 2 young juveniles met at GameWorks for the purpose of having a fight. Both juveniles had several friends with them.

During the fight, a gun was pulled out by one of the juveniles. Multiple people saw the gun and that is what prompted the calls to Las Vegas police.

Police say that no shots were fired though and no one was injured during the incident. Police have placed several people under arrest and gun was recovered. There is one person that police are still looking for. Police say they know who that person is.

Just spoke to someone who was inside Gameworks at Town Square... here’s what he said happened. @KTNV pic.twitter.com/zcWQRamgIM

A couple more videos of the aftermath of the large fight @ShopTownSquare that was initially called into @LVMPD as an active shooter. Police say no shots fired. @KTNV pic.twitter.com/X8dntMrwnu

Witnesses react to scare at Town Square in Las Vegas. Police say there’s NO proof shots were fired. We have team coverage at 11 on @KTNV with @BCallahanKTNV pic.twitter.com/WM3QW1orfE

Las Vegas police say no shots were fired & the area is safe. Many we spoke with were shaken up at reports of gunfire. Police say they believe there was just a big fight. Here’s one dad’s reaction @KTNV pic.twitter.com/q2TXVVqBtr


A man was arrested in May after he was spotted at Boulevard Mall with a gun, which was later determined to be fake. A similar situation took place that night with several false reports and a huge police presence.

Many people are still on edge in Las Vegas after 58 people were killed during a mass shooting at the Route 91 Harvest Festival on the Las Vegas Strip on Oct. 1, 2017.