A vote not expected until next month 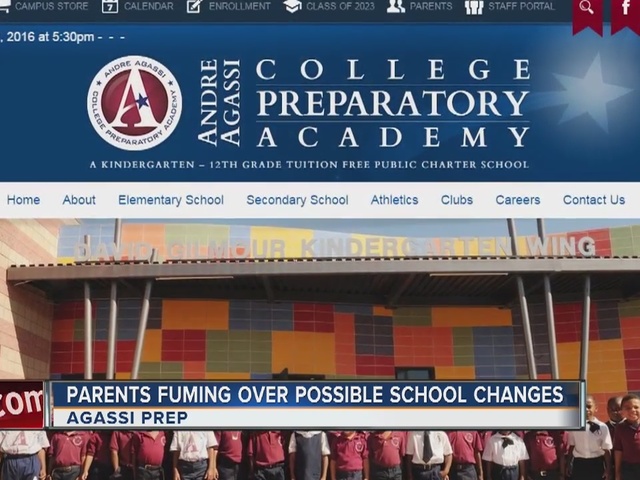 Parents of students at Andre Agassi College Preparatory Academy say their board members are trying to merge with another prep school that would create 10 hour school days and a six day school week. 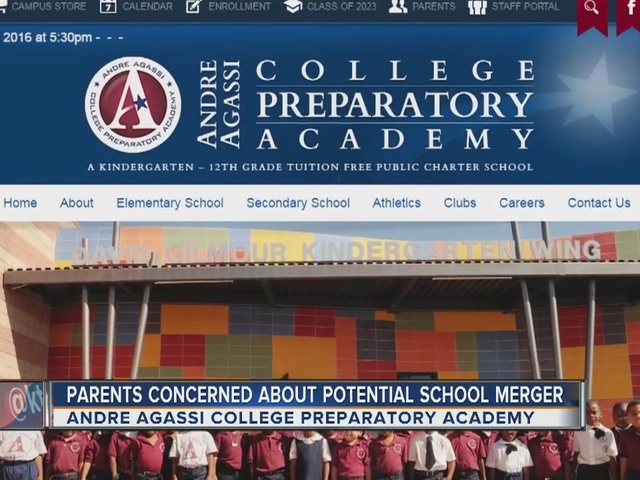 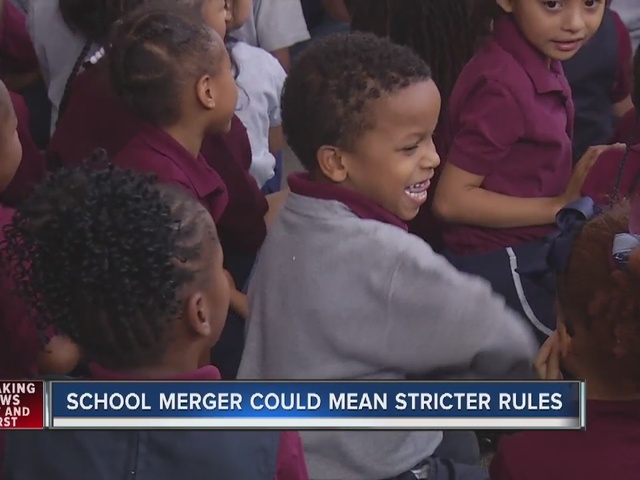 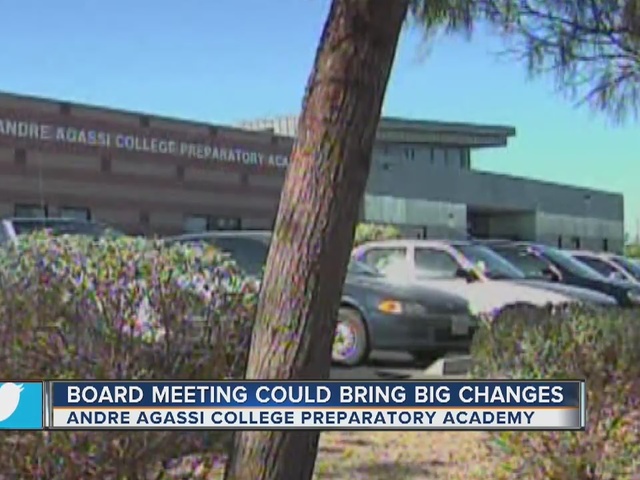 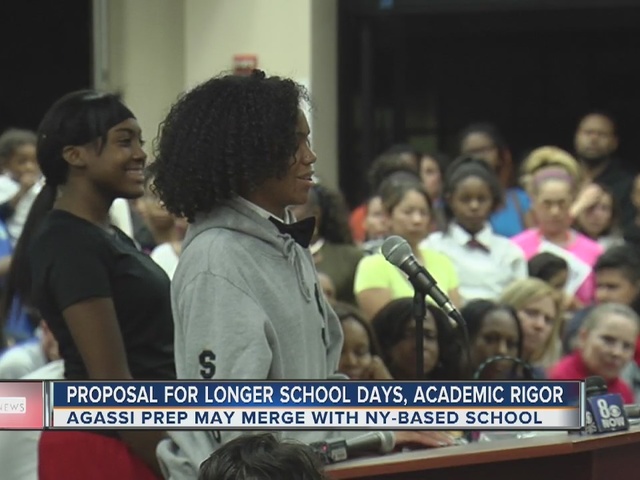 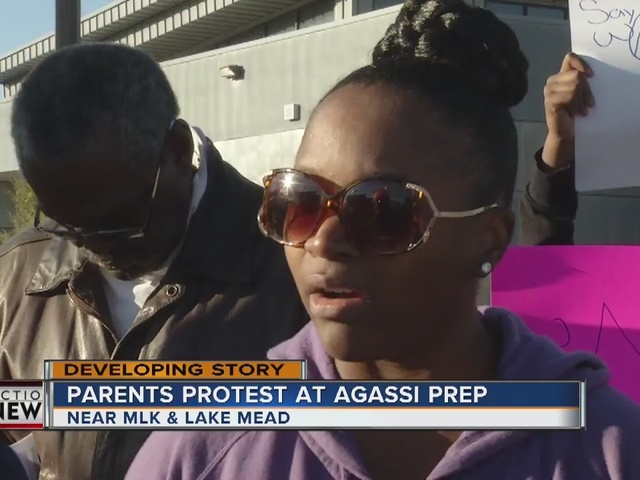 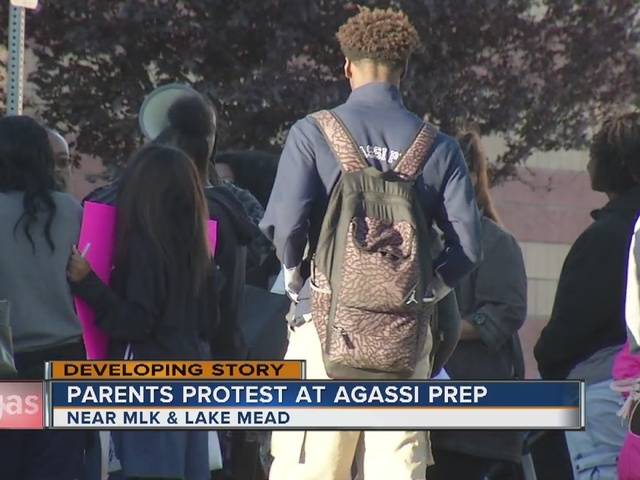 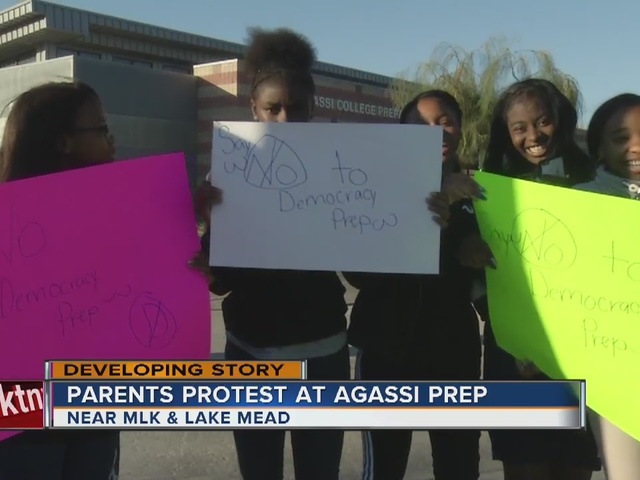 By: Gina Lazara , Tom George , Marissa Kynaston
Posted at 11:44 PM, Oct 31, 2016
SECOND UPDATE: Dozens of parents gathered early Thursday morning in front of the school, holding up signs that read "No Democracy Prep." Parents are concerned because Democracy Prep has a reputation for being strict.
The board for Agassi Prep voted last night to continue its discussions with Democracy Prep and another meeting is taking place at 6 p.m. Thursday. At this time, the board is expected to vote on the merger on Dec. 13.
UPDATE: Stay in New York. That’s what some valley parents are telling a New York-based school that wants to take over a popular valley charter school.

Hundreds of parents and students packed the board meeting at Agassi Prep in Las Vegas Wednesday night, saying “no” to a possible merger with Democracy Prep.

They’ve heard about Democracy Prep’s reputation for strict discipline. They don’t want any part of it.

One-by-one parents and students told board members they don’t want their charter school run as strictly as a reform school.

“You’re turning the school into a prison,” said a female student.

Democracy Prep has a reputation for high academic standards, low tolerance for students falling out of line and longer school days.

Parents like Tiffany Cole worry the new school would place too much emphasis on discipline and not enough on education.

“The children won’t learn much. And the school is just going to go down from here,” Cole said.

Democracy Prep is also known for being sticklers on things like no talking between classes in the hallway or at lunch. Cole’s son, Miguel, says that just isn’t natural for a kid.

“We’re not going to be able to talk at lunch or talk in the halls and that’s where I talk to my friends,” Miguel Cole said.

When asked how she’d respond to parents who worry the merged schools would become tough disciplinarians, Democracy Prep CEO Katie Duffy said while her school sets high academic standards, parents have nothing to fear.

“We don’t find the discipline is too aggressive. It is a means of furthering academic progress,” Duffy said.

Duffy says classroom hours may be longer and the staff may change, but there won’t be mandatory Saturday classes.

The board could vote on the merger next month.
ORIGINAL STORY
LAS VEGAS (KTNV) -- Parents at Andre Agassi College Preparatory Academy are up in arms over a recent letter they received from teachers about a possible merger with another prep school that would reportedly mean longer school days.
Janet Hill says she is one of many parents that were called to an emergency meeting last Thursday at Andre Agassi College Preparatory Academy where they learned about this so-called "takeover" that would give the school new ownership and a new name, Democracy Prep.
"The beliefs at Agassi are different from Democracy Prep cause Democracy Prep is more like discipline," said upset parent Janet Hill. "The kids don't talk during lunch, they walk in a straight line quiet like, I love learning, school is the foundation of life. But your child also has to have social skills."
Hill says the director of Andre Agassi College Preparatory Academy and one of the board members held the meeting where they explained to parents about the possible merger with East Coast-based school Democracy Prep. She says they showed a slideshow about why this would be good for the students.
Meanwhile, Hill says, teachers were passing out fliers to the parents that say school days would be 10 hours long and the school week would be six days instead of five.
"I've been talking to a lot of parents and they're like, we're just going to take our children out," said Hill. "But I feel like we should fight! You fight for what you believe in. It's not easy 'cause you know, what about the next child? It's not right!"
However, Democracy Prep CEO Katie Duffy told 13 Action News Tuesday the rumors of a six-day week are not true. The longer class times are possible.
"We do believe that the more time kids are spending engaged in academic rigor, the more likely they are to become lifelong learners," she said.

A board meeting is scheduled for Wednesday at 5:30 p.m.

There's also a petition going around to stop the potential merger.
Hill also told us representatives from Democracy Prep will be in town starting Wednesday for a 45-day observatory period of the students.
Duffy says she hopes parents will keep an open mind about what they have to offer. She will be attending the meeting Wednesday and hopes to be able to answer parents' questions.
Meanwhile, school founder Andre Agassi himself says the decision is "in the board's hands." He says he's open to any option that would benefit the students at Agassi.
Copyright 2016 Scripps Media, Inc. All rights reserved. This material may not be published, broadcast, rewritten, or redistributed.