CAUGHT ON CAMERA: Package thief could be targeting families on summer vacation

A man is caught on camera, stealing a package off a front door step in the southwest valley. 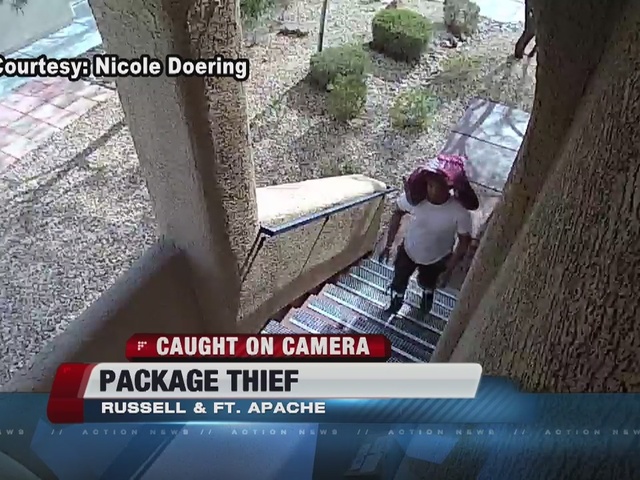 A man is caught on camera, stealing a package off a front door step in the southwest valley.

The victim says her summer vacation could have attracted the thief.

"You don't want someone coming and taking things off your own front porch," says the victim, Nicole Doering.

When Doering and her family got home from vacation, they checked their surveillance video and noticed a man walking up their front door steps and stealing a package at the home near Russell Road and Grand Canyon Drive.

The man appears to try to hide his face by draping a hoodie over his head.

"It's not something you want, you don't want people lurking around your property and coming onto your porch when you're not home, or even when you are home," says Doering.

Doering says the suspect didn't get away with anything of value, but she's worried he may have targeted her family, knowing they had left on vacation.

According to the FBI, crime rates increase about 10 percent in June, July, and August.

One simple reason, home security is easily forgotten during the rush to leave on vacation.

"It just makes you wonder what else is going on while you're gone," says Doering.

"It was about 30 minutes after the UPS truck delivered it, according to the company that shipped my package," says Doering.

It's called "Porch Pirating," when thieves swipe packages delivered to homes when the owners aren't there. Sometimes, the thieves will follow UPS trucks, and wait until the driver is out of sight to make their move.

Doering says she's worried the same thief may have targeted other homes by following the same UPS truck as he made his deliveries.

"It just seems like it's happening everywhere in town," says Doering.  "I see people on the news, all these different clips just like mine of packages getting stolen. I don't know what can be done, but I just think something needs to happen."

There are ways you can prevent package thefts from happening.

One way, you can put a vacation hold on your shipments for up to two weeks.