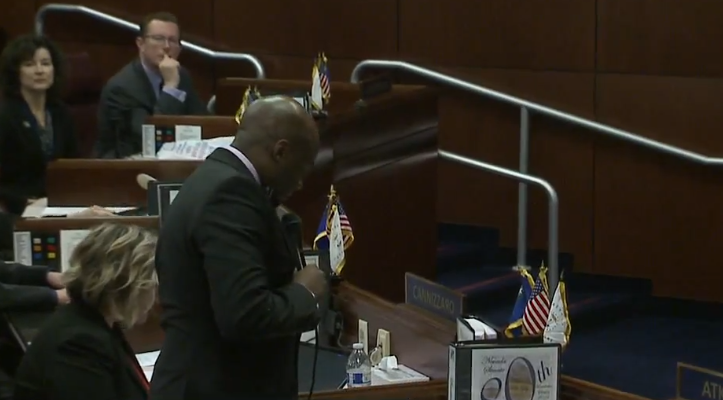 Atkinson apologized in an emotional speech on the floor of the state Senate on Tuesday and said he was embarrassed, ashamed and would be pleading guilty to charges he faces.

"I've let myself and my family down. I accept full responsibility for my actions and cannot express the depth of my remorse. I am fully sorry," Atkinson said.

The Democrat did not offer details about the charges he faced because it was an ongoing matter in court.

Senate Minority Leader James Settelmeyer accused Atkinson of violating the integrity of elections and breaking the trust of voters and colleagues.

“I am extremely disappointed in the news that Kelvin Atkinson misappropriated campaign funds for his personal use. This admitted violation of the law goes against the integrity every elected officer in the state of Nevada should uphold. By doing so, he betrayed the trust of the public, and therefore should be held accountable."

“The Nevada Senate Democrats are saddened and disappointed to learn of the circumstances leading to Senator Atkinson’s resignation today,”
Bruce said. “The charges levied against him are serious, and allege conduct that we strongly condemn. His resignation is appropriate. We trust the courts to do justice in this matter. Given what little information we currently have, we won’t be commenting on what appear to be ongoing investigations."

Additionally, the Nevada Republicans in the Senate issued the following statement:

"Senator Atkinson has violated the integrity of our elections and broken the trust of the voters and his colleagues. We hope this is an exception, but we must get all of the facts and determine how far this corruption goes. We must preserve the integrity of this institution."

It will be up to the all-Democrat Clark County Commission to appoint a replacement for Atkinson.

State law requires Atkinson’s replacement to be a Democrat and live in state Senate District 4, including the predominantly minority West Las Vegas neighborhood.

Atkinson says he let his supporters down and is praying for their forgiveness. However, he could be facing up to 20 years behind bars.