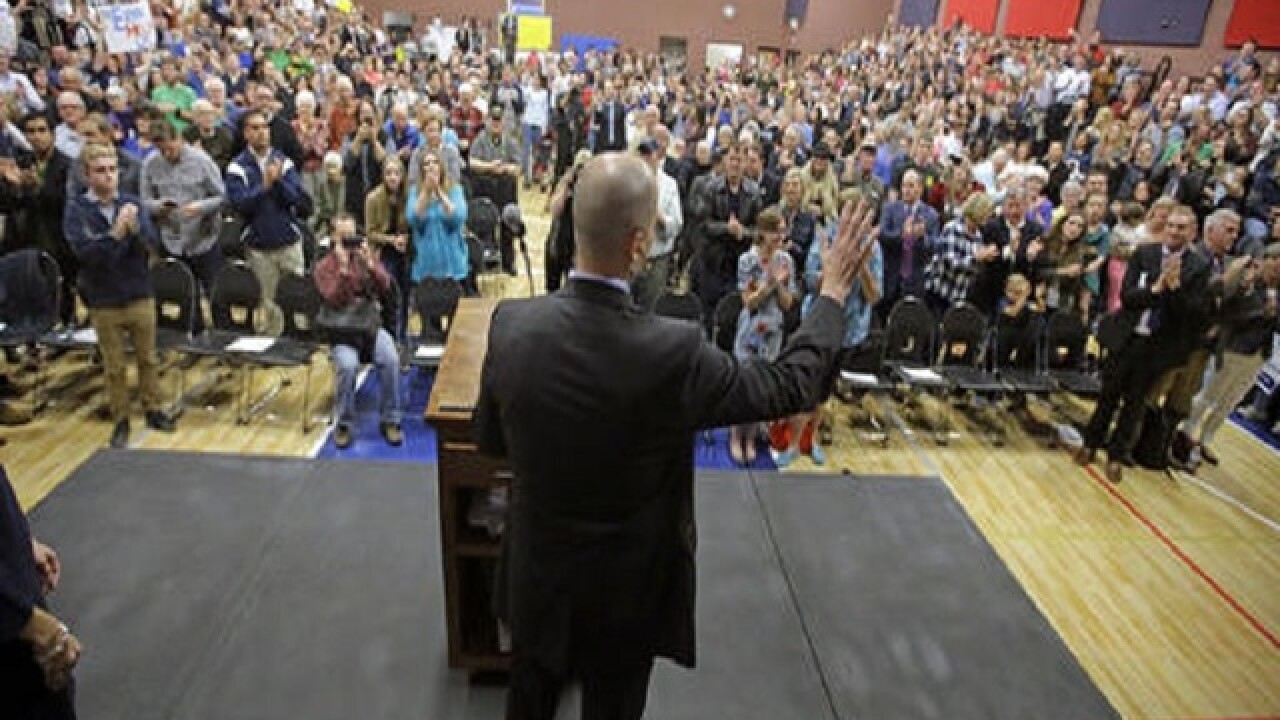 SALT LAKE CITY (AP) — An independent presidential candidate Evan McMullin criticized Republican Donald Trump on Monday over an automated call in Utah from a white nationalist supporter who calls McMullin a "closet homosexual" and "open-borders amnesty supporter."
McMullin responded with a series of strongly worded tweets — calling it another "desperate attack" spreading "baseless lies" by Trump and his "racist supporters as he continues to lose ground in Utah." He said the attack is consistent with Trump's "bigoted, deceitful campaign and vision for America. Utahns won't be fooled."
White nationalist William Johnson said the call will go out Monday night through Wednesday to 193,000 voters in Utah, where polls show McMullin is threatening Trump amid widespread backlash against the brash billionaire among the mostly Mormon electorate.
McMullin has been embraced by many Republican-leaning voters who are steeped in Utah's culture of courtesy and fed up with Trump's crudeness and antics. If McMullin prevailed, he would be the first non-GOP candidate to win the state since 1964.
In the 40-second call, Johnson introduces himself as a "farmer and white nationalist." He says McMullin is OK with legalizing gay marriage and with the fact that he "has two mommies," a reference to McMullin's mother marrying a woman after divorcing his father. He also questions McMullin's relationship status.
"Evan is 40 years old and is not married and doesn't even have a girlfriend," Johnson says. "I think he is a closet homosexual."
McMullin, a Mormon, told the Salt Lake Tribune that he knows people wonder why he has not married, considering many in his religion marry in their early 20s. He said his 11-year career in the CIA made it difficult to date and that he hopes to marry and become a father soon.
On same-sex marriage, McMullin said he believes marriages between a man and a woman are best for society but he respects the U.S. Supreme Court's 2015 decision legalizing gay marriage.
McMullin's campaign didn't respond to a request for further comment Monday. Trump's campaign also didn't respond to requests for comment.
Trump has faced criticism in the past for retweeting posts from the accounts of white supremacists and failing to immediately denounce the support of former Ku Klux Klan grand wizard David Duke.
Johnson is among white supremacists who have credited Trump with invigorating their cause. He said in a phone interview that Trump had nothing to do with the call, which is designed to show Utah voters that McMullin is a "faulty" candidate.
Regarding Johnson's allegations on immigration policy, McMullin says he's against amnesty and advocates more agents, technology and walls in some places to secure the border. He also backs a path to earned citizenship for those in the country illegally after the borders are more secure.
Copyright 2016 The Associated Press. All rights reserved. This material may not be published, broadcast, rewritten or redistributed.