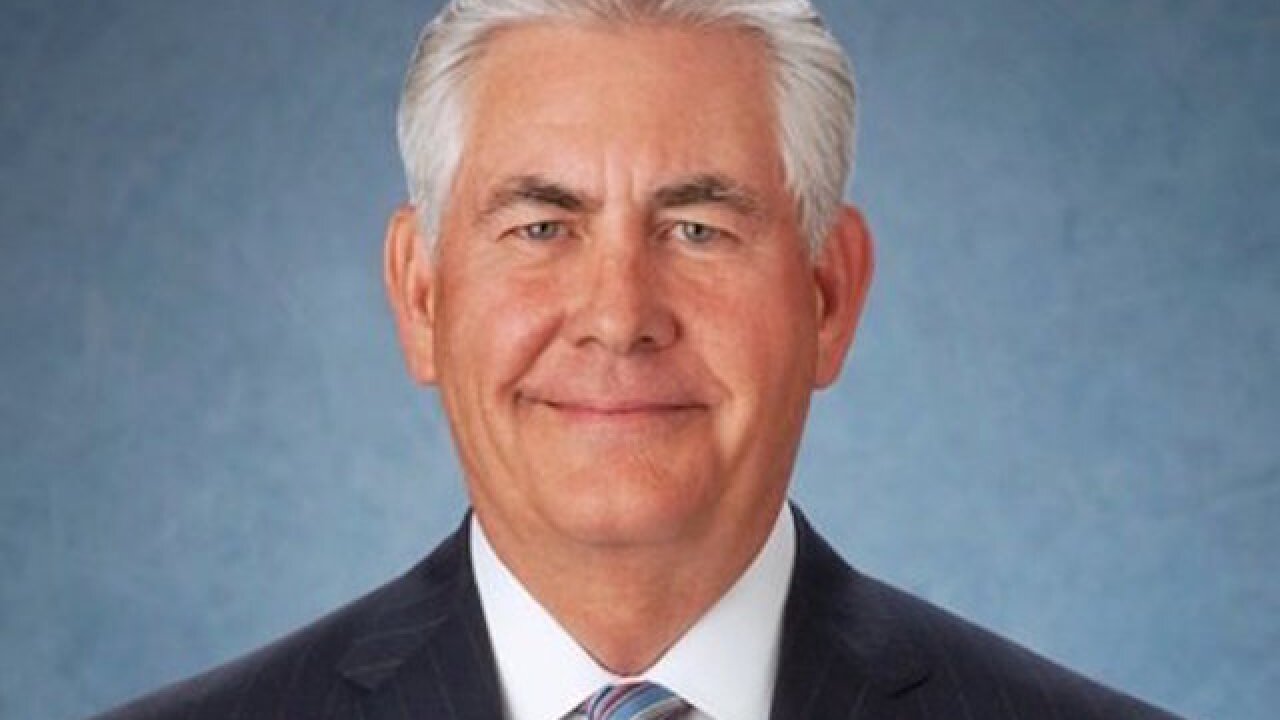 CNN
From Exxon
<p>President-elect Donald Trump has chosen ExxonMobil CEO Rex Tillerson to serve as secretary of state, the transition team announced Tuesday, setting up a heated Senate confirmation battle and signaling a desire to ease Washington's estrangement with Russia.</p>

(CNN) -- By selecting ExxonMobil CEO Rex Tillerson to serve as secretary of state, Donald Trump on Tuesday guaranteed that his four most influential departments will, if confirmed, be led entirely by white males for the first time since George H.W. Bush's first Cabinet was approved in 1989.

Tillerson, who faces headwinds even among Senate Republicans, would be the nation's top diplomat, while retired Marine Gen. James Mattis has been tapped to run the Defense Department, Alabama Sen. Jeff Sessions is the pick for attorney general and ex-Goldman Sachs banker Steve Mnuchin will be nominated to run the Treasury Department.

All four are white. The first round of top appointees in the Obama administration included an African-American man -- Attorney General Eric Holder -- and a white woman -- Secretary of State Hillary Clinton. Colin Powell, then a retired general, became the only person of color in former President George W. Bush's top four when he was nominated and confirmed as the first African-American secretary of state.

Of Trump's 18 choices to date -- excluding his vice president and senior White House staff -- 14 are white, of which 12 are male. None are Latino. By comparison, 11 of the the corresponding positions in Obama's first Cabinet were white -- with seven men and four women -- along with Latino labor and interior secretaries and three African-Americans, two of whom were women.

Trump has selected three women of color to top positions. South Carolina Gov. Nikki Haley, who is Indian-American, is the pick for US Ambassador to the United Nations. The Taiwan-born former Bush administration labor secretary, Elaine Chao, the first Asian-American woman to serve in a presidential Cabinet, has been tapped by Trump to head the Transportation Department. And Seema Verma, the daughter of Indian immigrants, has been selected to run the Centers for Medicare and Medicaid Services -- what should be a key role in the Obamacare repeal fight.

Top national security posts in the Trump administration will also be held exclusively by white men. In addition to Mattis, another retired Marine general, John Kelly, is slated to take over the Department of Homeland Security, while Kansas Rep. Mike Pompeo has been nominated as the next CIA director. Retired Army Lt. Gen. Michael Flynn, a top Trump aide and senior staffer, will round out Trump's senior security staff.

Former World Wrestling Entertainment CEO Linda McMahon, another GOP billionaire donor, will not require Senate confirmation to take over as administrator of the Small Business Administration.