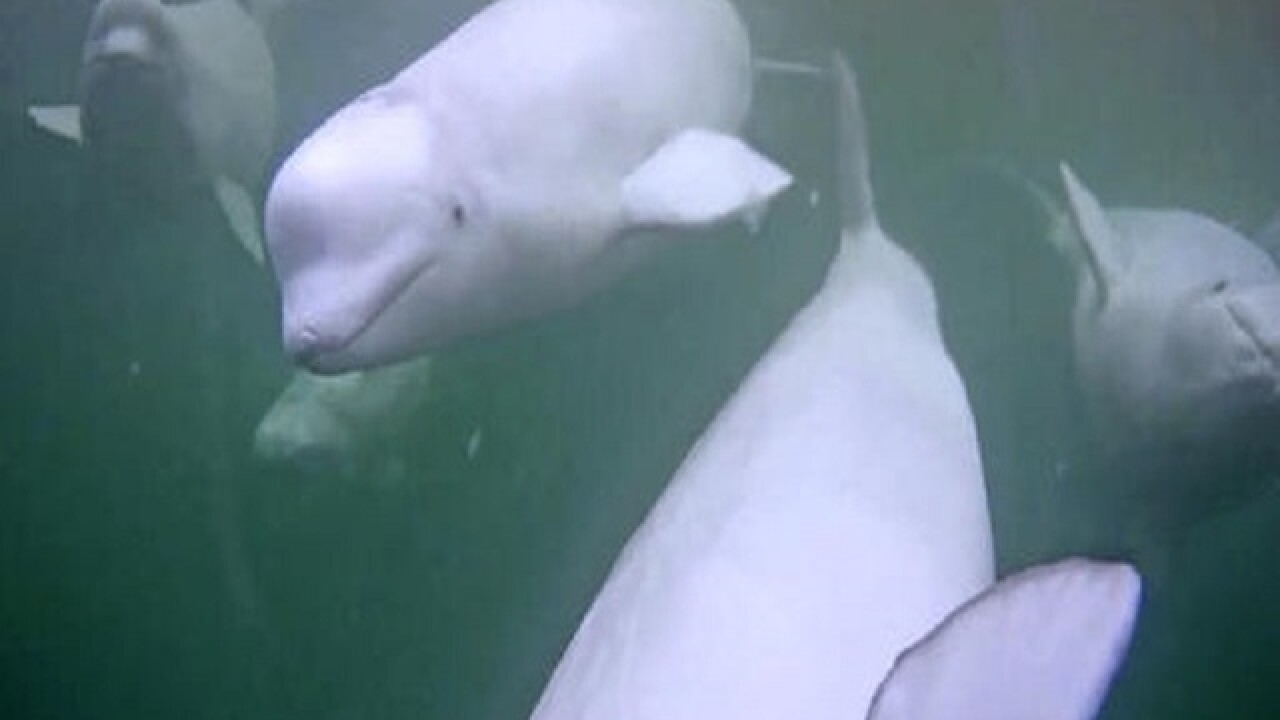 <p>This July 2016 photo provided by Explore.org shows the view of a beluga whale from a webcam gathered in the Churchill River in the Hudson Bay in Manitoba, Canada. Canadian researchers are turning to the internet to learn about the social behavior of thousands of beluga whales that migrate to Hudson Bay every year. (Explore.org via AP)</p>

By: Associated Press
Posted at 12:47 AM, Aug 15, 2016
HELENA, Mont. (AP) — The underwater webcam attached to Hayley Shephard's boat captures what at first appear to be green glowing orbs as she motors through an estuary in remote Canada. Then the orbs come into focus, revealing some of the more than 3,000 beluga whales that gather in the waters in and around Hudson Bay each summer.
The white whales, which resemble oversized dolphins, nuzzle and clown for the camera. They feel the lens with their teeth and blow bubbles at it. Sometimes they swim upside down for a better view.
That's what Stephen Petersen, head of conservation and research for Winnipeg's Assiniboine Park Zoo, and his wife, biologist Meg Hainstock, are looking for. Only when the whales turn upside down can the researchers determine their sex, which they need as they study the animals' social structure and behavior.
The webcam's viewers across the globe are helping, too.
Its creators — Bozeman, Montana-based Polar Bears International and Explore.org, a project of the Annenberg Foundation — included a "snapshot" feature that allows viewers to take still shots of the feed. Petersen and Hainstock hope the result will be a trove of photographs of individual whales that will help them catalog the population as they try to answer questions about the animals' behavior.
For example, why do certain whales of a similar age and sex consistently gather at certain times or locations? What function do Hudson Bay's estuaries serve for these animals? Do beluga whales have a matriarchal social structure? Do certain whale groups' low numbers have a long-term effect on the rest of the population, such as the case with the population in Alaska's Cook Inlet, which is struggling as compared to the healthy Hudson Bay population?
"As far as I know, there's no other investigation of beluga from under the water on this scale," Petersen said. "A lot of the stuff that's been done before is from observers on top of the water. It doesn't really give us a good sense — belugas don't spend a lot of time on top of the water."
Explore.org and Polar Bears International have used similar crowdsourcing technology to monitor polar bears' annual migration in Hudson Bay. Researchers hope years of viewers taking snapshots will provide them with images that can help assess the bears' health and reproductive rates.
Other scientists are increasingly using crowdsourcing to raise money for research or perform tasks that would be too costly or time-consuming to be performed by a team of researchers. One of the most well-known projects is by the SETI Institute in Mountain View, California, whose software has been downloaded by millions of users and allows researchers to use the data-processing power of those computers in the institute's search for alien life in space.
"In general, there is a growing interest in using citizen science projects to raise awareness and support scientific research," said Krista Wright, executive director of Polar Bears International.
For the beluga whale project, Petersen said viewers are instructed on how to identify males from females, and are then asked to take snapshots when the whales flip over and their sex is in view of the camera. The photographs are tagged male or female and uploaded to a database that will help identify individual whales and their locations.
Operators switched on the cameras July 15 and have since averaged about 2,500 viewers a day, according to Explore.org spokesman Mike Gasbara.
The researchers hope that after this season ends in August, they will have a catalog of individual whales that can be tracked in subsequent years, along with the locations where different groups are gathering to find if any patterns emerge.
Understanding the beluga whales is important because their ecosystem soon may be altered with the effects of climate change, Gasbara said. Less Arctic ice could bring threats to the beluga in the form of killer whales and increased boat traffic and pollution, he said.
"I think because we're right at the beginning of this, any information that we get on social structure is going to be informative for other locations," Petersen said.
Back on the surface in Canada's Hudson Bay, ghostlike humps emerge as more whales are drawn to Shepherd's 10-foot inflatable boat. She pilots the vessel slowly around the estuary for four hours a day over the short northern summer, sometimes narrating her observations to web viewers.
"It's important to know that we ultimately are visitors and we are in their territory," Shepherd said. "Them approaching the boat, following the boat — it's all their doing. We don't need to run up to them and ride along."
Occasionally, one of the whales will slap the water with its tail and soak her.
"Sometimes I feel like they've adopted me into their pod," Shephard said.
Copyright 2016 The Associated Press. All rights reserved. This material may not be published, broadcast, rewritten or redistributed.