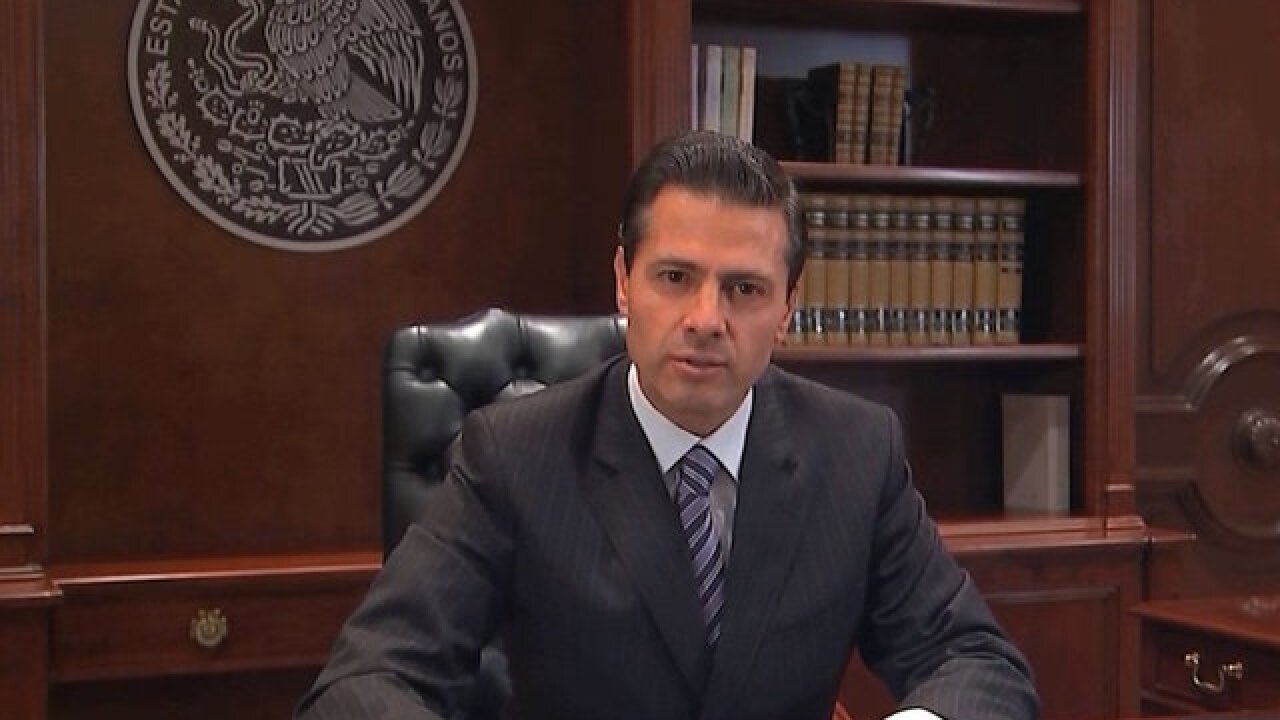 © 2017 Cable News Network, Inc.
Mexico Government
<p>Mexican President Enrique Peña Nieto said Wednesday his country "will not pay for any wall," defying the claims US President Donald Trump has made. But he did not cancel his trip planned for the United States next week.</p>

WASHINGTON (CNN) -- Mexican President Enrique Peña Nieto on Thursday canceled a meeting with U.S. President Donald Trump that had been set for Tuesday after renewed tensions over Trump's plan to build a wall on the border.

"This morning we have informed the White House that I will not attend the meeting scheduled for next Tuesday with the POTUS," Peña Nieto tweeted.

Earlier Thursday morning, Trump had tweeted that it would be better to skip the meeting if Peña Nieto continued to insist Mexico would not pay for the wall, which he had again said as recently as Wednesday evening.

Trump's pushback came after Peña Nieto said -- again -- on Wednesday that his country "will not pay for any wall," Trump tweeted that they should just skip their planned meeting at the White House.

"If Mexico is unwilling to pay for the badly needed wall, then it would be better to cancel the upcoming meeting," Trump tweeted and in an earlier tweet he noted the US's trade deficit with Mexico and what he said were the American job losses caused by NAFTA.

On Wednesday night, Pena Nieto had said he did not see a need to cancel his trip -- but reiterated that he wouldn't fund the wall.

"Mexico does not believe in walls. I've said time again; Mexico will not pay for any wall," he said in a video statement posted to Twitter and translated by CNN from Spanish.

The back-and-forth between the two leaders -- which began last year during the very first days of the Trump campaign when he called some Mexicans entering the US criminals and rapists and tensions lingered throughout the campaign. They escalated over the last 24 hours when Trump took executive action on Wednesday to begin the process of erecting a wall.

The President announced that move while a high-level Mexican delegation was visiting the White House -- the first foreign representatives to visit since Trump took office -- for meetings with top officials, including Chief of Staff Reince Priebus and adviser Jared Kushner.

Peña Nieto said he would wait for a final report from his top officials in Washington, and previous meetings with Mexican legislators, before deciding which steps he would take next.

Peña Nieto also said he had ordered government agencies to step up protection for immigrants.

"I've asked for the minister of Foreign Relations to re-enforce protection measures to our citizens," he said. He added that the 50 Mexican Consulates in the US will be used to defend the rights of immigrants in the country. He also issued a call to action to legislators and civil organizations to help immigrants.

Peña Nieto closed his message by saying that Mexico offers and expects respect.

"Mexico offers its friendship to the people of the United States and expresses its wish to arrive at agreements with its government, deals that will be in favor of Mexico and the Mexicans," he said.

Earlier in the day, Trump signed two executive orders directing the construction of a wall on the US-Mexico border, boosting border patrol forces and increasing the number of immigration enforcement officers who carry out deportations.

Meanwhile, the Mexican officials that arrived Wednesday were expected to lay the groundwork for Peña Nieto's visit next week, which Mexican diplomats see as an important opportunity to get past the anti-Mexico rhetoric Trump used during the campaign and a chance to put the US-Mexico relationship back on track.

"There is ... frustration with our government and ourselves that we have not been able to tell the story of this important relationship," a Mexican diplomat told CNN ahead of the visit. "There are a lot of stereotypes of Mexicans in the US, but there are also stereotypes of Americans in Mexico. It is in the interest of both governments to explain what this relationship is and what we can do together."

In a Monday speech, Peña Nieto said his government is prepared to negotiate with the US if Mexico's national sovereignty is respected. He laid out economic integration and respect for the rights of migrants and the money they send home as his nation's key negotiating points.

Trump has suggested some of the $25 billion in annual remittances that migrants return home would be retained to pay for the border wall -- a project Mexico opposes and which Peña Nieto has said Mexico would never pay for.

"Neither confrontation nor submission. Dialogue is the solution," Peña Nieto said Monday.

This won't be the first meeting for the two men. Trump flew to Mexico City during his campaign to meet Peña Nieto and said they discussed a wall Trump has vowed to build on the US southern border, but not his demand that Mexico pay for it -- an assertion the Mexican president later disputed.

"At the start of the conversation with Donald Trump, I made it clear that Mexico will not pay for the wall," Peña Nieto tweeted, after their meeting.

The visit was widely viewed as a public relations disaster for Peña Nieto.