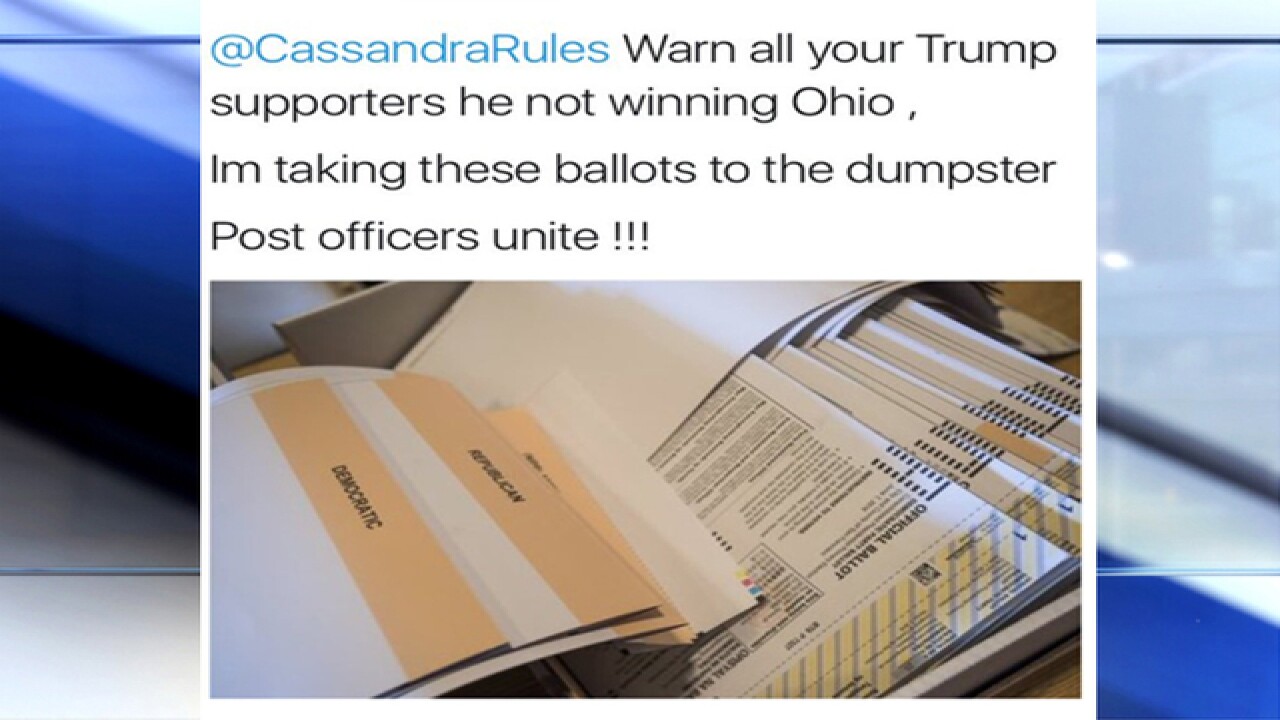 No, Ohio postal workers are not destroying absentee ballots for Donald Trump.

That’s according to the United States Postal Service, which has been bombarded with complaints and questions this week after a man claiming to be a postal worker tweeted images of “Trump ballots” being destroyed.

Twitter user "@randygdub” tweeted Sunday, claiming he worked for the USPS in Columbus and loves “ripping up absentee ballots that vote for Trump."

The user also tweeted a photo of generic ballots with the text: “Warn all your Trump supporters he not winning Ohio...Im taking these ballots to the dumpster...Post officers unite!!! (sic).”

The messages were re-tweeted and spread thousands of times on Twitter, Facebook pages, other social media groups and fake news websites.

The Franklin County Board of Elections and the Ohio Secretary of State's Elections division say absentee ballots are enclosed in not one, but two secure envelopes, making it impossible for postal workers to identify who someone voted for without opening the envelope.

The USPS also investigated the tweets and said there have been no cases of absentee ballots being destroyed in Ohio and officials do not believe "@randygdub” is a real postal worker.

@RickyBird11811 The Postal Service has completed an initial investigation of the mentioned tweets and does not be... https://t.co/qV1gFBN9Zy

These latest allegations of vote tampering come on the heels of messages from Trump to supporters that this year’s presidential election might be “rigged” in favor of Hillary Clinton.

Of course there is large scale voter fraud happening on and before election day. Why do Republican leaders deny what is going on? So naive!

Ohio Secretary of State Jon Husted said Monday that he wants to assure Trump of one thing: “The election is secure, and the threat of widespread voter fraud is just not something that is happening in Ohio.”

Ohio has voting systems in place, like with the state’s voter ID laws, that make the state secure against attempts at rigging an election, Husted said.

“You can be an observer to make sure everything goes smoothly. And if you attempt to create voter fraud, we’ll catch you,” Husted said. “And in Ohio today, elections are more secure than they’ve ever been.”