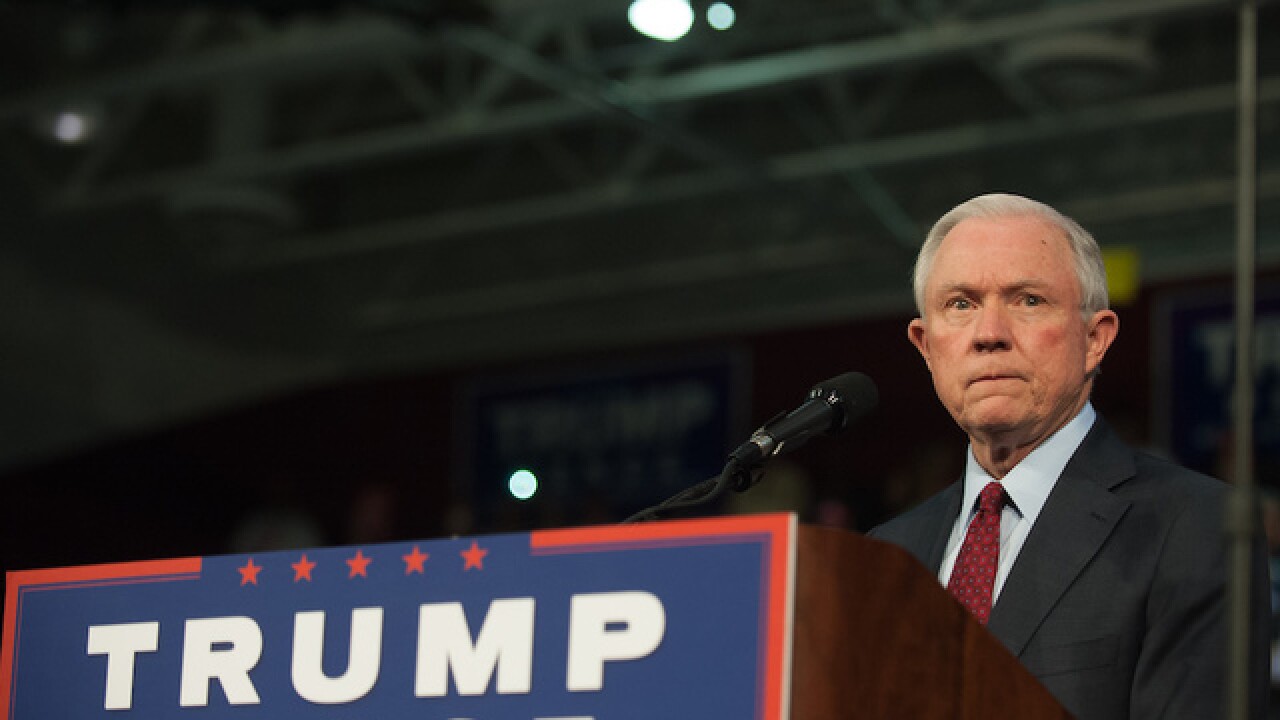 Copyright Getty Images
Jeff Swensen
<p>ABRIDGE, PA - OCTOBER 10: Alabama Senator Jeff Sessions pledges his commitment to Republican candidate for President Donald J Trump before he speaks to supporters at a rally at Ambridge Area Senior High School on October 10, 2016 in Ambridge, Pennsylvania. Ambridge, Pennsylvania, named after the American Bridge Company, a steel fabricating plant that employed 60,000 workers is a traditionally Democratic stronghold, but is shifting Republican as a shrinking tax base and lost jobs having devastating economic effects on the former industrial community. (Photo by Jeff Swensen/Getty Images)</p>

The pick was disclosed Friday by a senior Trump official who wasn't authorized to speak publicly about it. The official wouldn't say whether Sessions had accepted the job, leaving open the possibility that the appointment wasn't final.

Sessions, the first senator to endorse Trump and a Republican known for his support of tough immigration enforcement policies, would likely bring to the department a consistently conservative voice. The former federal prosecutor has questioned whether terrorism suspects should receive the protection of the American court system, objected to the planned closure of the Guantanamo Bay detention facility and has given prominence to the specter of voting fraud, a problem that current Justice Department leadership believes is negligible.

The committee's Republican chairman, Sen. Chuck Grassley of Iowa, praised Sessions as someone who worked "across the aisle on major legislation" and said he was confident he'd be approved by the panel. The committee's top Democrat, Vermont Sen. Patrick Leahy, said he's disagreed over the years with Sessions on civil rights, immigration and other issues and that "the American people deserve to learn about Senator Sessions' record."

As attorney general for a president who campaigned on a "law and order" stance, Sessions is likely to depart from the priorities of his predecessors in the Obama administration, Loretta Lynch and Eric Holder.

Civil rights advocates who have seen their causes championed at the Justice Department for the last eight years have already raised concerns that a Trump administration would scale back those efforts, which have included forcing police departments to correct unconstitutional practices and suing North Carolina over a bathroom bill that officials said discriminated against transgender individuals.

Sessions has previously said a "properly exercised" Civil Rights Division "provides tremendous benefit to American citizens" but should not be used as "a sword to assert inappropriate claims that have the effect of promoting political agendas."

It's impossible to predict what actions Sessions would take as attorney general, but his questioning of current and former Justice Department officials offer clues about his perspective on some issues.

He's shown particular interest in national security, arguing as recently as June that the federal government is unable to fully vet refugees from countries including Syria.

Sessions has said the Obama administration's counterterrorism policies had "emboldened our enemies" and failed to address border control, claiming that hundreds of foreign-born individuals have been charged with acts of terrorism since Sept. 11, 2001. But the culprit of the deadliest such attack in that period, a nightclub shooting in Orlando this year, was born in the United States.

Sessions has warned against the administration's efforts to close Guantanamo and has condemned the administration's decision to afford the legal protections of American courts to terror detainees. And he's been protective of certain surveillance powers, telling Holder in one committee hearing that when it comes to warrantless wiretapping, "we've exaggerated the extent to which this is somehow violative of our Constitution."

Sessions was nominated in 1981 by President Ronald Reagan to be the U.S. Attorney for the Southern District of Alabama. He was elected state attorney general in 1995 and joined the Senate two years later.

The last time he faced Senate confirmation, things did not go well.

In 1986, the Judiciary Committee voted against confirming him for a federal judgeship after he was accused of making racially charged remarks while U.S. attorney in Alabama. Sessions later withdrew from consideration.

According to transcripts of the hearings, Sessions was accused of calling the NAACP and the ACLU "un-American, Communist-inspired organizations," joking that he thought was the Ku Klux Klan "was OK" until he learned they smoked marijuana, and calling a black assistant U.S. attorney "boy."

Sessions' record as a U.S. attorney was heavily criticized by then-Sen. Edward Kennedy, a Democrat, who said he was unqualified to be a federal judge because of his attitude toward black people.

"Mr. Sessions is a throwback to a shameful era which I know both black and white Americans thought was in our past. It is inconceivable to me that a person of this attitude is qualified to be a U.S. attorney, let alone a U.S. federal judge," Kennedy said. "He is, I believe, a disgrace to the Justice Department and he should withdraw his nomination and resign his position."

During the hearing, Sessions denied making some of the comments and said others were jokes that had been taken out of context. He said he didn't mean any harm by the comment about the NAACP.