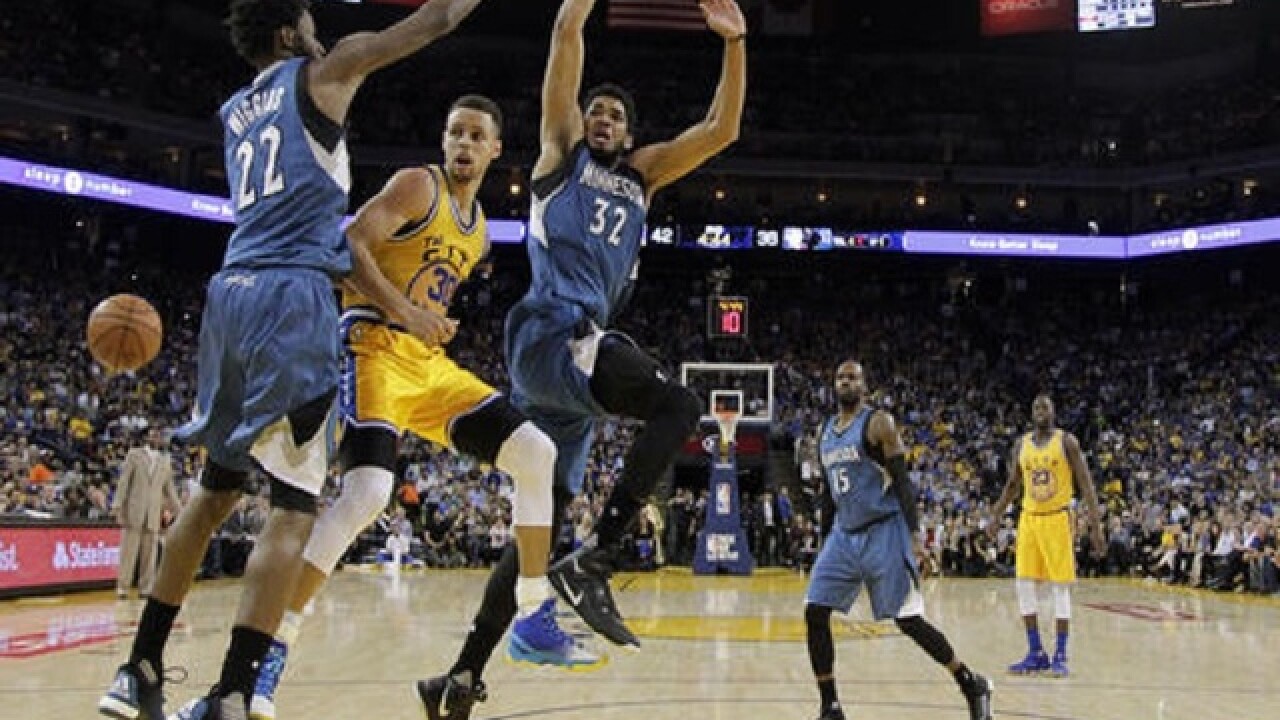 OAKLAND, Calif. (AP) — The Golden State Warriors hit an unexpected obstacle on their quest for a record 73 wins, blowing a 17-point lead and losing 124-117 in overtime to the last-place Minnesota Timberwolves on Tuesday night.
Shabazz Muhammad scored a career-high 35 points and Andrew Wiggins had 32 as Minnesota prevented Golden State (69-9) from becoming the second team to win 70 games in a season. The Warriors now must win their final four games to break the single-season wins record of 72 set by Chicago in 1995-96.
Stephen Curry had a rare off-shooting night as Golden State took its third loss against a team currently in last place in its division, following earlier defeats at Milwaukee in December and last month at the Los Angeles Lakers.
But this one came at home, where the Warriors had won a record 54 straight regular-season games before falling to Boston last Friday.
Klay Thompson scored 28 points, while Curry had 21 points and 15 assists despite missing 18 of 25 shots for the Warriors, who never led in the overtime.
Wiggins scored Minnesota's first six points of the extra session to give the Timberwolves their first lead since the first quarter. Muhammad drew the sixth foul on Draymond Green and made both foul shots to make it 114-109.
Curry and Thompson then both missed late 3-pointers and the Timberwolves won the game at the foul line, shocking the sellout crowd that came to celebrate a milestone victory.
Golden State got a big break late in regulation when a potential three-point play by Towns was overturned to an offensive foul when replay showed Curry was outside the restricted area when he drew contact from the rookie center.
But Minnesota still managed to tie the game on a spinning drive by Wiggins with less than 20 seconds to go and didn't allow the Warriors to get a shot off before the end of regulation.
It was a strange first half with Curry missing all eight shots he took from the field and not scoring a single point until making a pair of free throws with 27.8 seconds remaining. But he did record 10 assists as his teammates carried the scoring load with Harrison Barnes leading the way with 18 points in the half to help Golden State take a 55-46 lead at the break.
Curry didn't make his first shot from the field until hitting a 3-pointer with just over 9 minutes left in the third quarter. Curry then made three more from long range in a span of less than two minutes late in the quarter to help the Warriors take an 86-78 lead into the fourth.
Associated Press 2016