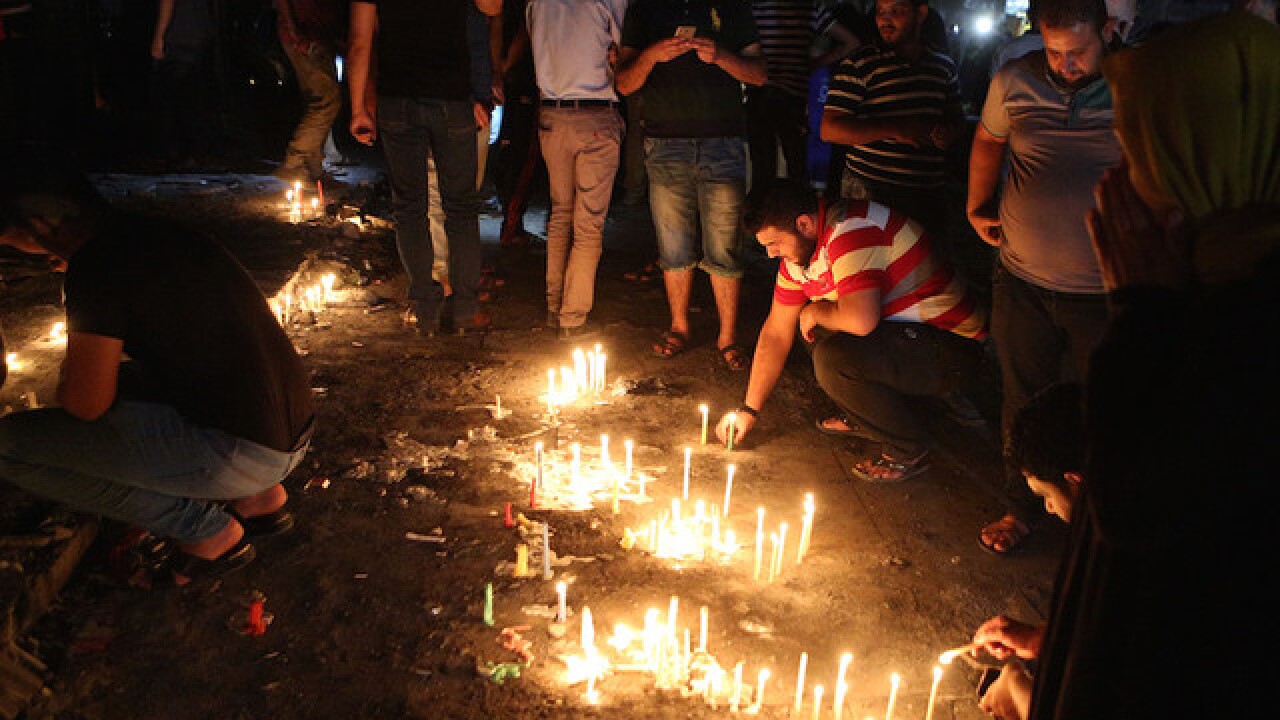 Hadi Mizban
<p>People light candles at the scene of a massive car bomb attack in Karada, a busy shopping district where people were shopping for the upcoming Eid al-Fitr holiday, in the center of Baghdad, Iraq, Sunday, July 3, 2016. More than 100 people died Sunday in a car bombing that Islamic State said it carried out, an official of the Iraqi Interior Ministry said. (AP Photo/Hadi Mizban)</p>

The bombing, claimed by the Islamic State group, was the deadliest terror attack in Iraq in a year and one of the worst single bombings in more than a decade of war and insurgency. It underscored the IS group's ability to strike the Iraqi capital despite a string of battlefield losses elsewhere in the country and fueled public anger toward the political leadership.

The suicide bomber blew up his explosives-laden vehicle in Baghdad's mostly Shiite Karada district, a favorite avenue for shoppers — especially during the holy month of Ramadan, with the streets and sidewalks filled with young people and families after they had broken their daylight fast.

Police and health officials said Monday the toll reached 149 but that it was likely to increase even further as rescuers are stilling looking for missing people. At least 192 people were wounded, the officials said, speaking on condition of anonymity as they were not authorized to talk to reporters.

Hours after the bombing, al-Abadi visited the attack site in Karada, but a furious mob surrounded his convoy, yelling expletives, hurling rocks and shoes at the prime minister's cars and calling him a "thief."

In a statement issued later Sunday, al-Abadi ordered that a scandal-ridden bomb detection device be pulled from service. He also ordered the reopening of an investigation on the procurement of the British-made electronic wands, called ADE 651s.

In 2010, British authorities arrested the director of the British company ATSC Ltd. on fraud charges, prompting Iraqis to open their own investigation on alleged corruption charges against some officials. Iraqi authorities made some arrests, but the investigation went nowhere and the device remained in use.

Along with taking away the electronic wand detectors, al-Abadi also ordered that X-ray systems be installed at the entrances of provinces. He demanded the upgrades of the capital's security belt, increased aerial scanning, a step-up in intelligence efforts and the division of responsibility among various security units.

Iraqi and foreign officials have linked the recent increase in IS attacks —especially large-scale suicide bombings — with the string of losses the Islamic State group has faced on the battlefields across Iraq over the past year.

Iraqi security forces, supported by U.S.-led coalition airstrikes, have retaken the cities of Tikrit, and Ramadi, the Anbar provincial capital. Also in Anbar, Iraqi forces liberated Fallujah from the extremist group just over a week ago.

At the height of the extremist group's power in 2014, IS had deprived the government of control of nearly one third of Iraqi territory. Now the militants are estimated to control only 14 percent, according to the prime minister's office. IS militants still control Iraq's second-largest northern city of Mosul, north of Baghdad.