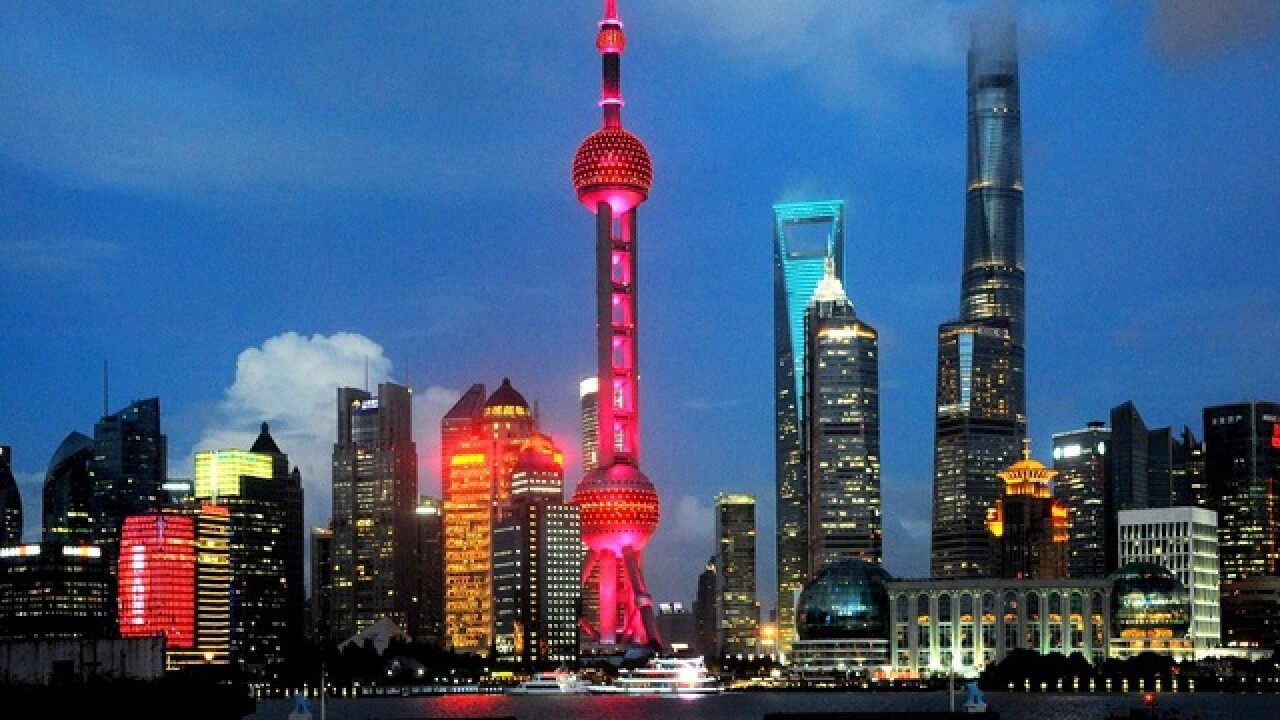 (CNN) -- The Shanghai Tower -- the world's second tallest building -- has just set three Guinness World Records.
The Chinese skyscraper now officially has the world's fastest elevator, tallest elevator in a building and the fastest double-deck elevator.
Standing at 2,074 feet (632 meters) tall, a fast lift was always going to be necessity.
Installed in July, the Mitsubishi Electric-designed elevator travels at an incredible 20.5 meters per second (67 ft/s) -- faster than Usain Bolt can run (40 ft/s), but slightly slower than a cheetah (95 ft/s).
Visitors are whisked up to the building's viewing tower by the lightning fast elevator, from where they have unrivaled views of the Bund.
Close race
The Shanghai Tower is not alone in its need for speed.
In the Southern Chinese city of Guangzhou, home to 8.25 million, Hitachi this summer unveiled its fastest elevator in Guangzhou's tallest tower, the CTF, which stands at 1,739 feet tall.
Its lift zooms from floors zero to 95 in an incredible 45 seconds -- or 20 meters per second (65 ft/s).
"We wanted it to be fast, but the current speed was not anticipated," says David Ho, head of design at New World Development, who was involved in the development of the CTF Tower.
"But the 'fastest' title will be gone soon," he predicts.
The terracotta warrior
The CTF Tower isn't just the tallest skyscraper in Guangzhou -- it's the tallest terracotta building in the world.
"That in itself was a huge technical challenge for us," Forth Bagley, principal architect at KPF, which designed the building, tells CNN of working with this unique material.
"The client wanted a material that recalled the (historic) ceramics (trade) of the region."
The result is an elegant skyscraper with a daily footfall of 25,000 people, zipping between the building's hotel, office and residential space.
"The elevatoring strategy required us to bring in high volumes of people ... and the client made a huge investment to try to make sure that happened quickly," Forth says.
Inside the cabin an indicator shows passengers how fast they are going -- perhaps to prove that they aren't being cheated.
A high-tech air pressure adjustment system that protects ears from popping and blocks any uncomfortable G-force backlash means this lift is so smooth it's hard to believe it's the world's second fastest.
Lift me up
It's not only China that is faced with the challenge of getting people through ever-taller towers with increasing efficiency.
Reaching 1km into the sky, the Jeddah Tower in Saudi Arabia will be the world's tallest building when completed in 2019.
A building so tall, naturally, requires an exceptionally fast elevator.
Finnish maker Kone has risen to the challenge, developing the "ultrarope" elevator, which uses a carbon-fibre cable strong enough to power a lift more than 1km in length -- previously, about 500km was the maximum length possible for a lift cable.
One third of the weight of traditional lift ropes, it also makes super speeds a reality.
The ultrarope lift will travel at "over 33 feet per second", and "reach the highest liveable floor in the world in 52 seconds," according to Kone.
When finally unveiled, it could easily be faster than Hitachi's creation. However, Albert So, an expert in elevator engineering, believes lift technology can't get much faster
"I predict the maximum speed of a vertical lift cabin cannot be more than 79 feet per second," he says. "This is not because we can't make lifts that go faster than this, but because of the air pressure."
If a lift traveled faster than this, he says, it wouldn't give passengers enough time to acclimatize to the air pressure on the top floor.
Engineers would need to pressurize the entire building, like an airplane cabin.
Lifts that move sideways?
Perhaps the most exciting innovation in lift technology is coming from German transport firm Thyssenkrupp.
By using magnetic levitation, or "maglev" technology -- which uses magnetic fields rather than elevator cables to propel cabins -- the company is proposing elevators that move both vertically and horizontally.
This type of elevator would be slower, at least initially, but it could increase travel efficiency throughout a sprawling building.
"I think this is our future," says So. "Our elevators will become more like a chess board, the pieces on the board moving around the building."
So acknowledges that governments around the world remain unconvinced of horizontal elevators' safety credentials, but says their introduction is only a matter of time.
"There is no practical value of building tall, when a tall building becomes slimmer as it gets taller," So says. "Most of the area at the top of the building is used for the elevator."
A bigger building with a horizontal elevator is a better use of space, he says.
The-CNN-Wire
™ & © 2016 Cable News Network, Inc., a Time Warner Company. All rights reserved.
KTNV