Released US pastor Andrew Brunson returns to US, meets with Trump 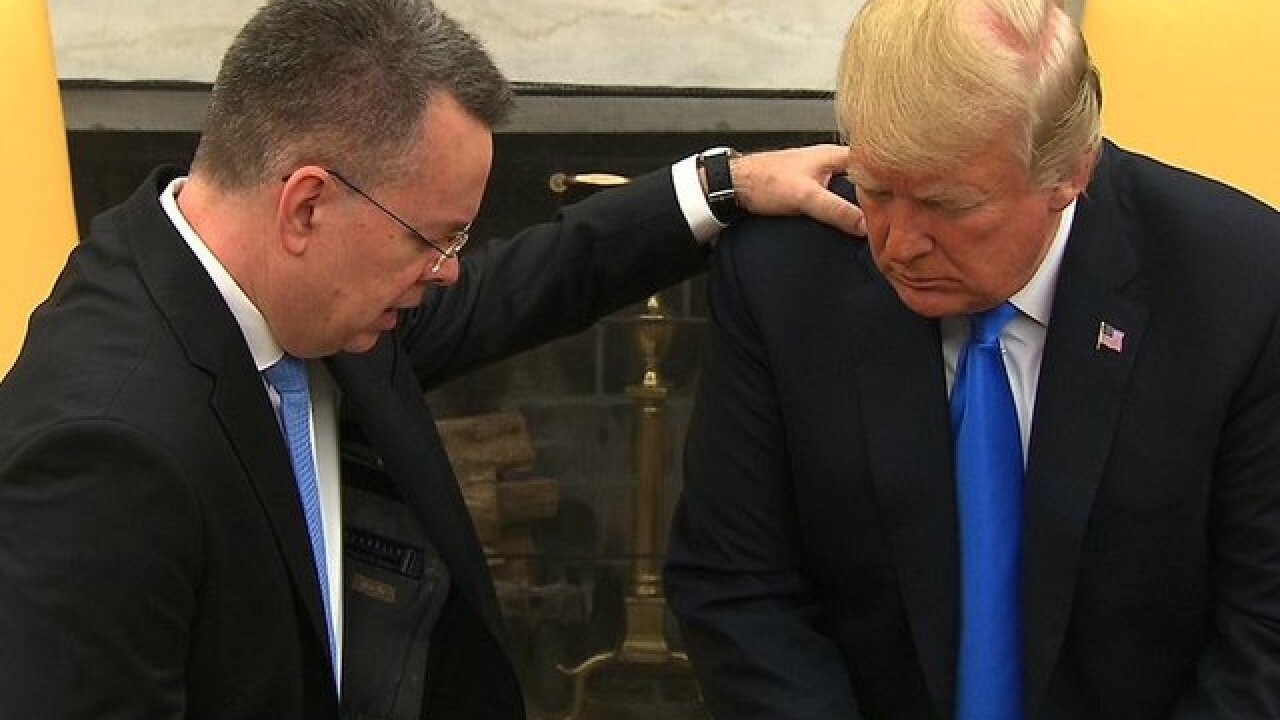 American pastor Andrew Brunson thanked President Trump for the administration's work to free him from a Turkish prison during an Oval Office news conference Saturday afternoon, a few hours after he arrived at Andrews Air Force Base outside Washington, D.C.

The President introduced Brunson and praised his resilience throughout the two years he spent in jail.

"I just want to congratulate you because you have galvanized this country," Trump said. "There's so much interest, and it's your faith, it's your strength, what you've done, gone through."

"I do want to thank President Erdogan for making this possible," Trump said. "It wasn't easy, it wasn't easy for him."

After introducing his family, Brunson thanked Trump for working to negotiate his release "from the time you took office."

"We especially want to thank the administration, they really fought for us, unusually so," Brunson said, addressing the President. "From the time you took office, I know that you've been engaged."

"We're so grateful to so many people in Congress who stood with us and who prayed for us and fought for us, so we want to thank you," Brunson said.

Brunson then prayed aloud for the President, asking that Trump be blessed with "supernatural wisdom" and "courage to stand for truth," and that he be protected "from slander from enemies and those who would undermine him."

Brunson's wife Norine then prayed aloud for the President, asking that he receive "the spirit of wisdom and understanding, the spirit of counsel and might, the spirit of knowledge and fear of the Lord."

"Thank you very much. Can I ask you one question?" Trump asked her after the blessing. "Who did you vote for?"

The group laughed, and the pastor assured Trump that he sent in an absentee ballot from Turkey voting for him.

"I knew the answer, I would never do that to myself -- that could be too tough," Trump said, before congratulating the family and expressing hope for an improved relationship with Turkey due to Brunson's release.

"We've had a very harsh relationship over the past number of months because of what was happening," Trump said. "This is a tremendous step toward having the kind of relationship with Turkey, which can be a great relationship, that I know we're going to have."

The President tweeted Saturday that Brunson would be joining him in the Oval Office after his return, adding there was "NO DEAL made with Turkey" for his release.

Brunson had been held in Turkey since 2016, accused of helping to plot a coup attempt against Erdogan. U.S. officials say Brunson was wrongfully detained.

The evangelical pastor's case strained relations between the two NATO allies and raised the possibility of significant U.S. sanctions and further threats.

"It will be wonderful to see and meet him," Trump tweeted Saturday. "He is a great Christian who has been through such a tough experience. I would like to thank President @RT_Erdogan for his help!"

"There was NO DEAL made with Turkey for the release and return of Pastor Andrew Brunson," Trump said in a follow-up tweet, adding, "I don't make deals for hostages. There was, however, great appreciation on behalf of the United States, which will lead to good, perhaps great, relations between the United States & Turkey!"

The Turkish president said Saturday in a tweet that "the Turkish judiciary reached its decision independently" and that he hopes the U.S. and Turkey "will continue their cooperation as the allies that they are, and jointly fight against terrorist groups."

Brunson has lived in Turkey for more than 23 years with his wife and three children, according to the American Center for Law and Justice, an organization led by Trump attorney Jay Sekulow that has advocated for his release.

Brunson was formally indicted in March 2016 on charges of espionage and having links to terrorist organizations. The charges against Brunson include supporting the outlawed Kurdistan Workers' Party as well as the Gulen movement, which Turkey accuses of orchestrated the coup attempt.

Brunson was released Friday after being detained in Turkey for two years. A Turkish court sentenced the pastor to three years and one month in prison but chose to release him based on his time already served as well as his manner during the proceedings, Brunson's attorney said. Prosecutors were seeking a 10-year prison term.

"He's, I think, in good shape," Trump told reporters Friday. "We're very honored to have him back with us. He suffered greatly. But we're very appreciative to a lot of people, a lot of people."

Trump tweeted about Brunson several times this year, and the White House repeatedly pushed for his release in conversation with Turkish officials.

In April, Trump asserted that Brunson was being "persecuted in Turkey for no reason" and said, "They call him a spy, but I am more a spy than he is. Hopefully he will be allowed to come home to his beautiful family where he belongs!"

Months later, Trump tweeted that the United States would impose "large sanctions" on Turkey for its detainment of Brunson, "a great Christian family man and wonderful human being. He is suffering greatly. This innocent man of faith should be released immediately!"