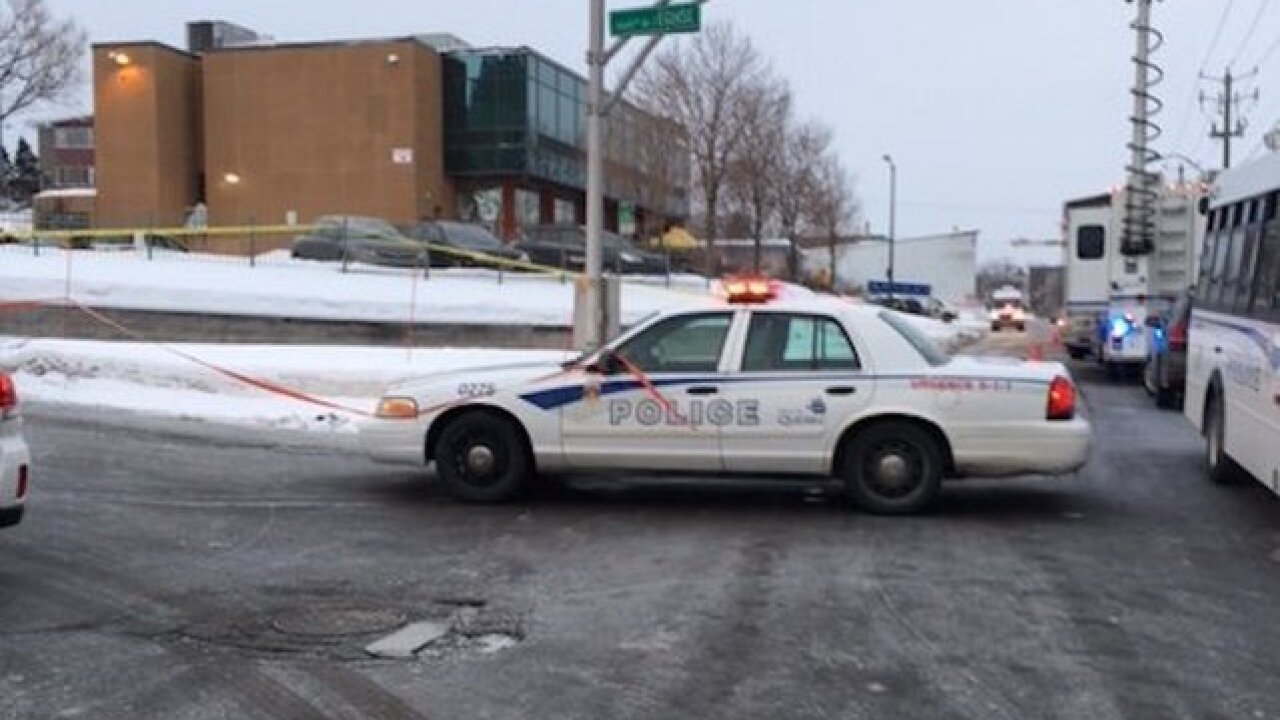 © 2017 Cable News Network, Inc.
CNN
<p>Multiple people are dead and more injured after a shooting at a mosque in Quebec City on January 29, 2017, according to Quebec Provincial Police.The attack, which took place at the city's Quebec Islamic Cultural Center, is being investigated as an act of terrorism by police.</p>

Streaks of dried blood crisscrossed the bullet holes on one wall. Gray and white robes hung from a coat stand near a raised shelf holding leather-bound copies of the Quran. Below, parts of the beige and green carpet also were encrusted with blood.

The Quebec Islamic Cultural Center was open on Wednesday, three days after a gunman killed six people who were among a crowd of men, women and children just finishing prayers.

The shooting started outside the small Quebec City mosque and continued inside, according to Rachid Aouame, a mosque leader and board member who witnessed the carnage.

"As we usually did after prayers, we chatted with friends," Aouame told CNN Wednesday, speaking in French.

As witnesses have sometimes said after other mass shootings, Aouame said he first thought fireworks were being set off outside. Then the bursts could be heard inside.

"There was panic," he said. "People tried to run away or hide."

Aouame said he turned around and saw the shooter, who gunned down Aouame's friend who always stood at the same spot in the mosque.

His brother-in-law, Azzeddine Soufiane, 57, a butcher and father of three, moved quickly in what appeared to be an attempt to disarm the lone gunman, Aouame recalled.

A longtime Quebec City resident of Moroccan descent, Soufiane briefly chased the gunman before being shot twice -- the second, fatal round coming after he already was down, according to Aouame.

The gunman did not utter a word during the shooting, Aouame said. "He didn't say anything," he said. "I saw his face. This was a person who was calm. That's what I saw."

Authorities have identified a suspect they are holding as Alexandre Bissonnette. Bissonnette was known to local activists for his far-right views, according to news reports.

A Facebook group dedicated to welcoming refugees in Quebec City said Bissonnette was known online for making statements inspired by extreme right-wing French nationalists. He followed several profiles that espoused right-wing ideologies on his Facebook page, including that of Marine Le Pen, the far-right leader of France's National Front, according to CNN's Canadian partner network CBC.

Another mosque Leader, Mohamed Labidi, said he believed Bissonnette was the same man who approached him and asked him for money recently. He said he did not give the man money because he suspected the man was a drug user.

Aouame said the mosque will continue to serve the community.

"This is our mosque," he said. "We will return here to pray. Today, we came to see the damage, to begin the repairs, and to tell the community, their second home will reopen."

The National Police of Quebec said 39 others inside the mosque were not hurt.

Attack investigated as act of terrorism

Bissonnette, who authorities have described as a lone wolf, faces six counts of first-degree murder and five attempted murder charges, according to the verified Twitter account of the Quebec Royal Canadian Mounted Police.

He was a student at Laval University in Quebec City, according to the school.

Authorities have not made any public comments about a possible motive, but police say they are investigating the attack as an act of terrorism.

On Monday night, a procession of candle-holding marchers moved quietly through the snow-packed streets during a vigil and a gathering at the mosque.

The mosque was also targeted in 2016, when a wrapped pig's head and a magazine with a pig on its cover, saying "Bonne Appetit" were delivered there, according to a post on its Facebook page.

The post read: "We just learned that a gesture of hate towards our Great Mosque took place Sunday morning (14 Ramadan) around Salat Al-Fajr! Police was made aware and opened an investigation!"

Under the Quran, pork is prohibited and pigs are considered unclean.