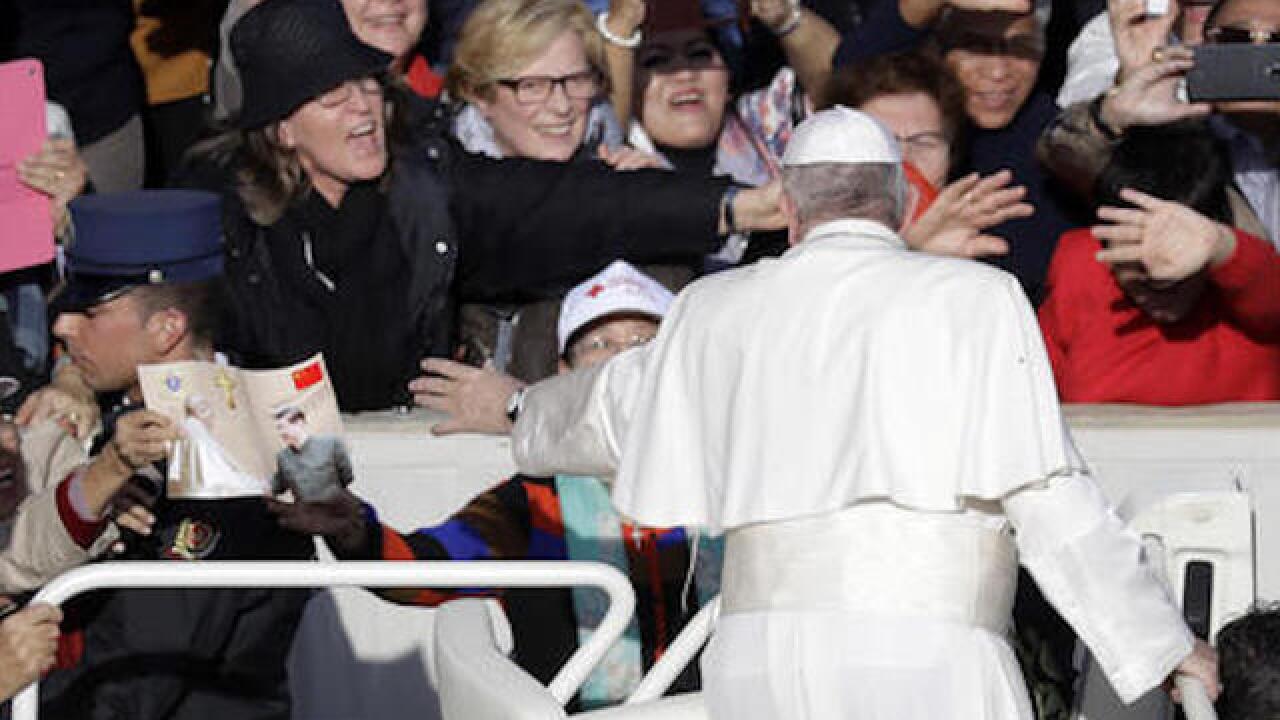 Copyright Associated Press
Gregorio Borgia
<p>A worshipper presents Pope Francis with a photomontage of an imagined meeting between the pope and Chinese President Xi Jinping at the end of a Mass on the occasion of the closing of the Holy Door of St. Peter's Basilica at the Vatican, Sunday, Nov. 20, 2016. (AP Photo/Gregorio Borgia)</p>

VATICAN CITY (AP) — Pope Francis is allowing all priests to absolve the faithful of the "grave sin" of abortion, extending indefinitely the special permission he had granted for the duration of the just-ended Holy Year of Mercy.

Francis wrote in the Apostolic Letter made public by the Vatican on Monday that "there is no sin that God's mercy cannot reach and wipe away when it finds a repentant heart seeking to be reconciled" with God.

But he also wrote: "I wish to restate as firmly as I can that abortion is a grave sin, since it puts an end to an innocent life."

Because the Roman Catholic Church holds abortion to be such a serious sin, it was long a matter for a bishop who could either hear the woman's confession himself or delegate that to a priest who was expert in such situations.

But in 2015, Francis allowed all rank-and-file priests for the duration of the Holy Year to grant absolution for an abortion. The Holy Year, which began on Dec. 8, 2015, ended on Sunday, Nov. 20, 2016, the day he signed the letter.

By permitting all priests to absolve the sin of abortion, Francis was further applying his vision of a merciful church. Last year, he wrote that some women who had abortions felt they had no choice but to make "this agonizing and painful decision."

"May every priest, therefore, be a guide, support and comfort to penitents on this journey of special reconciliation" after abortion, Francis said in his latest letter.

A top Holy See official, Monsignor Rino Fisichella, told a news conference at the Vatican Monday that the pope's words applied also to those who were involved in an abortion.

"The sin of abortion is technically an expression that includes all the people who are involved in an abortion," Fisichella replied to a question from The Associated Press. "Thus from the women to the nurse to the doctor and whoever supports this procedure."

In his Apostolic Letter, Francis explained his rationale: "Lest any obstacle arise between the request for reconciliation and God's forgiveness, I henceforth grant to all priests, in virtue of their ministry, the faculty to absolve those who have committed the sin of procured abortion."

During the recent U.S. presidential election campaign, some pastors urged their congregations to keep the "sacredness in life" — seen as a reference to abortion — in mind when deciding which candidate would get their vote. U.S. President-elect Donald Trump voiced his opposition to abortion while campaigning, while his Democratic opponent, Hillary Clinton, supported women's right to have an abortion.

Four cardinals, including archconservative U.S. Cardinal Raymond Burke, recently criticized Francis for what they indicated was ambiguity in past statements on whether divorced Catholics who remarry can receive Communion. Burke and the others expressed fear that Francis was causing "confusion" by saying the matter could be left to the discernment of local priests. Church teaching holds such Catholics are adulterers living in sin, and thus shouldn't receive Communion.

In the letter on abortion, Francis made plain that there can be no ambiguity in laying out moral principles, even while stressing the church's merciful side.

Addressing priests in part of the 10-page letter, Francis said: "I ask you to be welcoming to all, witnesses of fatherly love whatever the gravity of the sin involved, attentive in helping penitents to reflect on the evil they have done, clear in presenting moral principles, willing to walk patiently beside the faithful on their penitential journey, farsighted in discerning individual cases and generous in dispensing God's forgiveness."

"Mercy cannot become a mere parenthesis in the life of the church; it constitutes her very existence," Francis wrote.