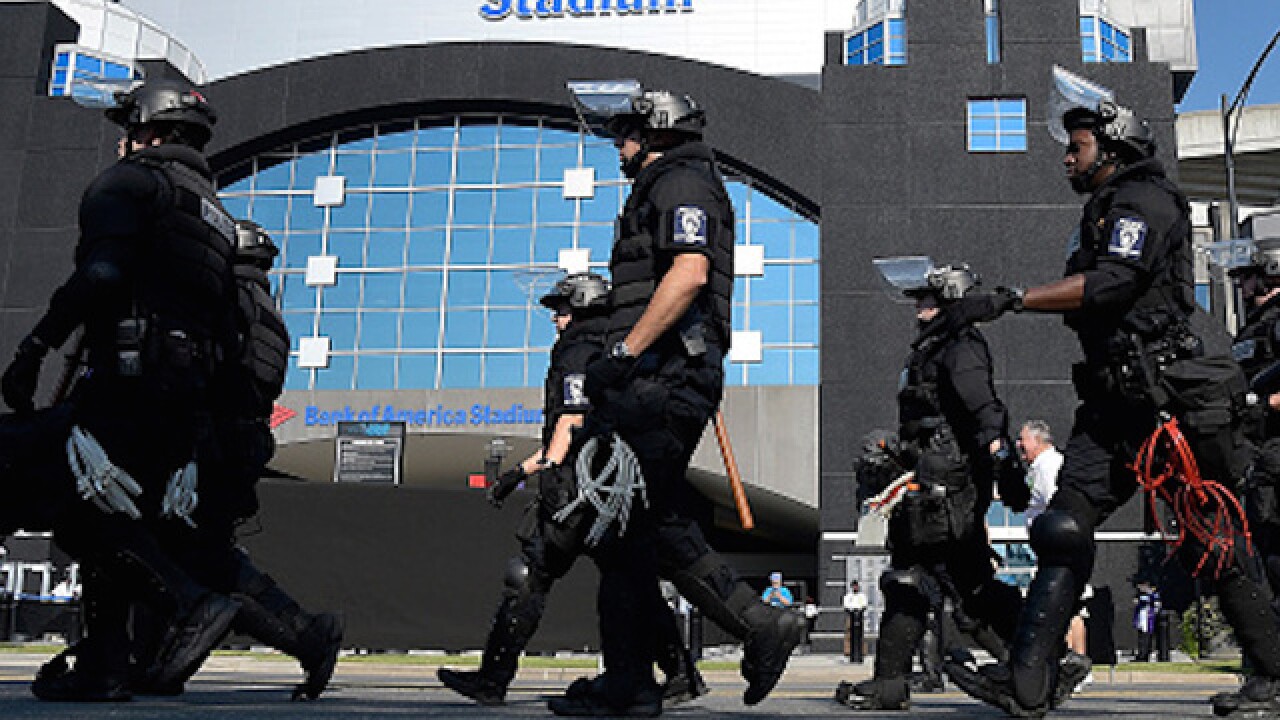 Copyright Getty Images
Grant Halverson
<p>CHARLOTTE, NC - SEPTEMBER 25: Charlotte Mecklenburg Police Department deploy outside of Bank of America Stadium prior to the game between the Carolina Panthers and the Minnesota Vikings on September 25, 2016 in Charlotte, North Carolina. Charlotte has been the site of civil unrest since Keith Lamont Scott, 43, was shot and killed by police officers at an apartment complex near UNC Charlotte on September 25, 2016. (Photo by Grant Halverson/Getty Images)</p>

Despite calls to sit during the Star Spangled Banner, all 53 Carolina Panthers stood Sunday during the national as hundreds of protesters took to the streets outside of Bank of America Stadium.

The Panthers and their opponents, the Minnesota Vikings, arrived without incident early Sunday morning under intense security measures. Meanwhile, hundreds of members of law enforcement stood watch outside of the stadium as fans filtered past the protesters.

On Saturday, police officials released dashcam and body cam video from Tuesday's shooting. The video showed Scott exiting a vehicle with an object the Charlotte Police Department described as a gun in his hand. After several commands by police for him to drop the gun, several shots were fired, killing Scott.

Scott's family claimed that he did not have a weapon, and was unfairly targeted by law enforcement.

Some Charlotte residents called on Panthers star Cam Newton to sit during the anthem. Instead, Newton wore a shirt during pregame warmups quoting Martin Luther King Jr. "Injustice anywhere is a threat to justice everywhere."

While thousands stood for the national anthem inside Bank Of America Stadium, protesters kneeled and held a first in the air as the anthem played.

The significance of sitting during the national anthem began last month when 49ers quarterback Colin Kaepernick did not stand for the national anthem, citing police brutality against minorities. He has since been joined by dozens of other NFL players, and athletes from other sports.

Since Kaepernick's protest began, a new wave of protests have been sparked by police-involved shootings in Columbus, Ohio, Tulsa, Oklahoma and Charlotte.

protesters in front of Bank Of America Stadium #CharlotteProtest pic.twitter.com/SGVeDLVJ28

NOW: #CharlotteProtest outside #MINvsCAR game. Officers watching in riot gear and on bikes nearby in front of stadium #KeithLamontScott pic.twitter.com/NtyJVnEUF1