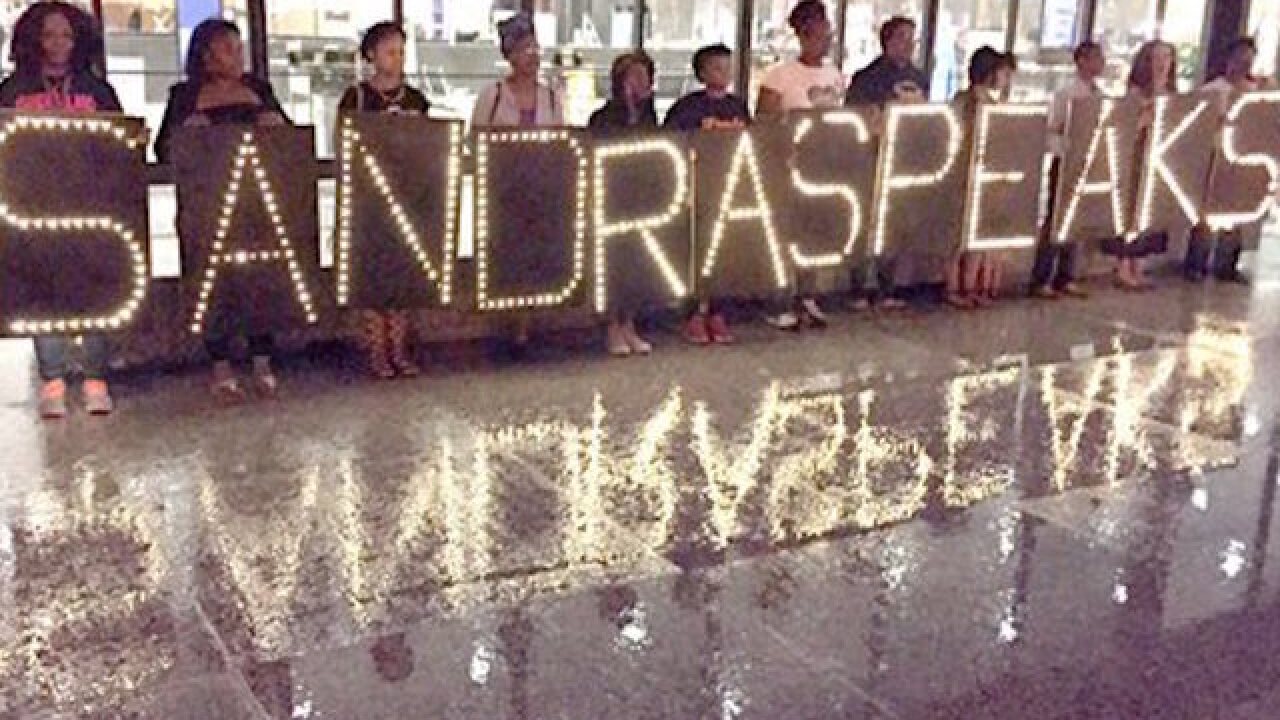 Copyright Associated Press
Paul Michna
<p>People gather in Chicago's Federal Plaza Wednesday, July 13, 2016 to remember Sandra Bland. Bland died a year ago Wednesday after a Texas state trooper pulled her over three days earlier. She was taken to the Waller County jail in Hempstead, Texas, where she was found hanging from a jail cell partition three days later. A plastic garbage bag was around her neck. (Paul Michna/Daily Herald via AP)</p>

DALLAS (AP) — A police officer in the small Texas town where Sandra Bland was pulled over and jailed says the county's top prosecutors threatened to end his career if he came forward with what he says is evidence of wrongdoing, an accusation the prosecutors deny.

Among the things Prairie View officer Michael Kelley said this week that he wanted to tell a grand jury: Bland appeared to have marks on her forehead after a confrontation with state trooper Brian Encinia, who pulled her over last July for allegedly failing to signal while changing a lane; Encinia was on the phone with a supervisor after arresting her because he didn't know what charge she should face; and the police report Encinia ultimately submitted left out key details.

Kelley said he was never contacted by special prosecutors handling the case, and the Waller County district attorney's top assistant said there would be repercussions if he spoke to a Bland family attorney. Prosecutors have strongly denied Kelley's allegations.

Bland, who was black, was found dead three days after the traffic stop in a county jail cell; authorities ruled it a suicide. But her death galvanized the national Black Lives Matter movement and others protesting recent police misconduct, all of whom said she was mistreated and shouldn't have been arrested. Bland's mother, Geneva Reed-Veal, appeared on stage at the Democratic National Convention on Wednesday with other black women whose children had died in encounters with law enforcement.

Many of Bland's supporters have long questioned whether local authorities would fairly investigate the case. No one from the jail or the sheriff's office has been indicted, even though the county acknowledged jailers did not properly monitor Bland or screen her properly after she mentioned she had a history of mental illness. One jailer has given a deposition admitting he falsified a jail log.

Encinia was indicted on a misdemeanor charge of perjury, which is pending, and was fired by the Texas Department of Public Safety.

Kelley, meanwhile, is suspended from the police department after being captured on video using a Taser on a black city councilman in Prairie View and being indicted for official oppression related to an unlawful arrest. He claims prosecutors sought that indictment as retaliation.

"I didn't become a cop to become shady like a lot of officers," Kelley told The Associated Press in a phone interview. "I became a cop to do justice and to try to change the community which I work in."

"I unequivocally state that he never approached me, my first assistant, or any member of my staff with any such information," Mathis said, adding: "I can only imagine this is an attempt to divert attention" from Kelley's case.

Darrell Jordan, a Houston attorney who was one of five special prosecutors handling the Bland case when it went to a grand jury, also said Kelley never approached him or any other prosecutor.

On the day of Bland's traffic stop, video from Encinia's squad car and a microphone on his uniform show the two beginning to argue. Encinia then reaches into the car and tries to drag Bland out of her seat before arresting her.

"Get out of the car!" Encinia is heard saying. "I will light you up! Get out!"

The two struggle outside of the car as Encinia handcuffs her and calls for backup. Kelley said he was one of the first to respond.

Encinia is later captured on audio going through possible charges for Bland, from resisting arrest to assault.

"I kind of lean toward assault versus resist because I mean, technically, she's under arrest when a traffic stop is initiated, as a lawful stop," Encinia is heard saying. He eventually wrote a report accusing Bland of assault on a public servant.

But Kelley said he saw bruises on Bland's forehead and heard Encinia tell his supervisor, "'I don't know what I'm going to charge her with yet.'"

Kelley's allegations are the latest to raise the idea that authorities haven't thoroughly investigated Bland's death.

Earlier this week, the Houston Chronicle reported a jailer admitted under oath to falsifying a notation in a jail log that he had checked on Bland during the hour before her death. Bland family attorney Cannon Lambert said the jailer made the admission during a deposition in the family's federal lawsuit against the county over Bland's death.