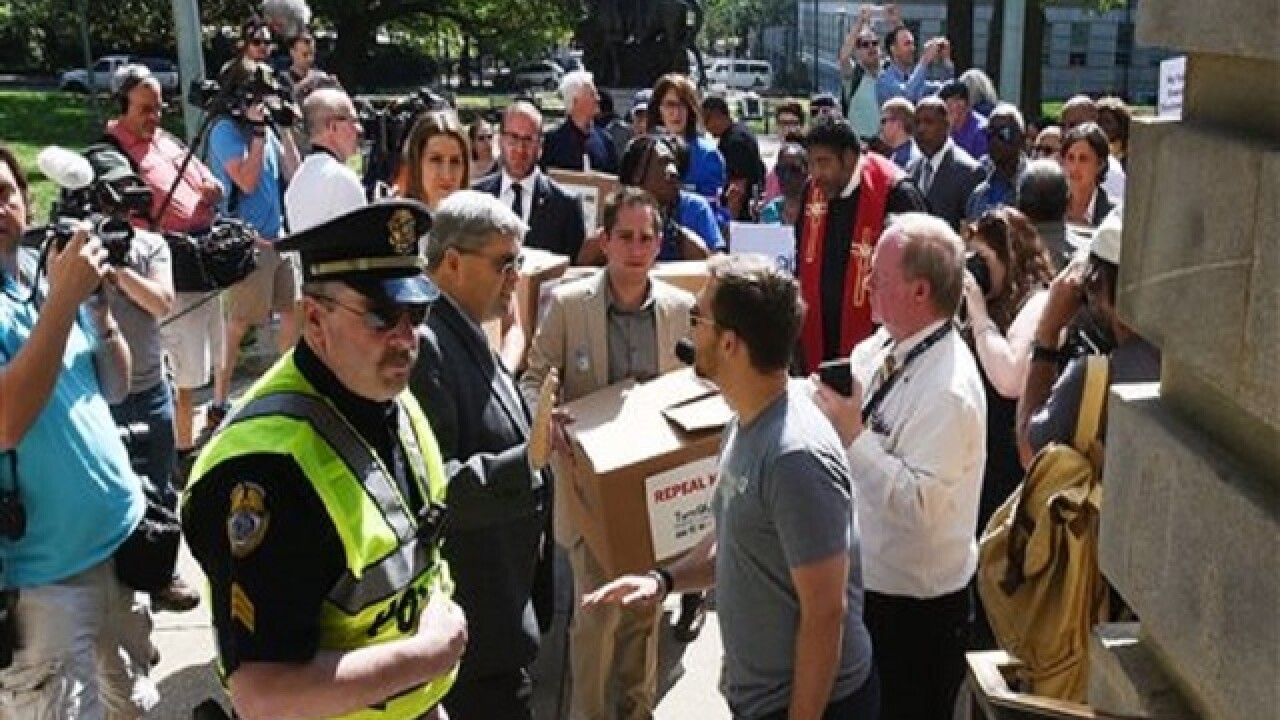 By: Associated Press
Posted at 6:28 PM, Apr 25, 2016
RALEIGH, N.C. (AP) — More than 50 opponents of North Carolina's new law curtailing protections for LGBT people and limiting public bathroom access for transgender people were arrested at the statehouse Monday night. It wrapped up a feverish day that brought several thousand of impassioned demonstrators for and against the law to the capital city for the opening of the legislature's annual work session.
Several hundred vocal critics of the legislation, approved in a special session last month, rallied outside the Legislative Building in the afternoon, then in waves of several dozen people each went inside and parked outside the offices of top legislative leaders for symbolic sit-ins.
A final wave entered House Speaker Tim Moore's outer office but refused to leave, leading to 18 arrests. Most were led off quietly, but one woman chanted: "Forward together, not one step back!"
Another 36 sitting on the floor or in chairs outside Moore's closed office were arrested after they failed to leave the Legislative Building after it closed for the night. All 54 would be charged with second-degree trespassing and for either violating building rules or the fire code, Acting General Assembly Police Chief Martin Brock said. One also faces a resisting arrest charge, he said.
North Carolina legislators held brief floor sessions Monday night. As the short House meeting ended, demonstrators in the gallery yelled their displeasure. Several dozen protesters continued a vocal protest inside the front doors of the Legislative Building for at least a half hour before leaving.
"We won't do HB 2," the protesters chanted, referring to the law by its initials. "North Carolina sticks together."
The arrests came hours after thousands of Christian conservatives and other supporters of the law gathered on a grassy mall behind the Legislative Building to praise the mostly Republican legislators and GOP Gov. Pat McCrory for passing the restrictions last month in a special session.
"It took great courage for them to establish this bill," said Doug Woods, 82, of Raleigh, a rally participant. "They need to stand firm."
The law blocks local and state protections for lesbian, gay, bisexual and transgender people and directs which restrooms transgender people can use in public buildings. Key lawmakers who pushed through the legislation also urged the rally attendees to contact colleagues and fight off efforts to overturn the law.
"The battle is about to be engaged," said Rep. Paul Stam, R-Wake, a veteran of North Carolina's cultural wars, addressing the crowd.
Earlier Monday, about 200 people gathered on the grounds of the old Capitol building to hear speakers denounce the law. They carried cardboard boxes holding what they said were 180,000 pro-repeal signatures on a petition for delivery to McCrory, whose office sits within the 1840 Capitol building.
"HB2 compounds the discrimination and marginalization of the transgender community, who already have to fight every day for their survival," said Joaquin Carcano, a transgender man who's suing over the law. "Our privacy and safety matter too. Our right to feel safe and protected in this world does not infringe on anyone else's right to the same."
The head of the state NAACP, the Rev. William Barber, called the law "Hate Bill 2." He said it affects the poor and minorities as well as the LGBT community, despite conservative efforts to depict it as a law focused on bathroom safety.
"We make a mistake when we call it the 'bathroom bill,'" he said.
Republican legislative leaders have expressed no interest in overturning the new law. GOP lawmakers have focused their discussion of the law on provisions requiring transgender people to use multi-stall restrooms that align with their gender at birth.
House Democrats filed legislation Monday to repeal the law, though a lack of Republican sponsors made its chances appear slim.
Democratic Rep. Grier Martin of Raleigh, a sponsor of the repeal bill, said the new law has stained North Carolina's reputation and harmed it economically. Some companies have halted planned expansions because of the law. Many groups have canceled scheduled conventions in the state.
If the repeal were approved immediately, Martin told reporters, "it would not undo with the swipe of a pen the incredible damage that House Bill 2 has done to our economy. But it would stop the bleeding and put North Carolina back on the path of progress."
Moore and McCrory said separately Monday that the law won't be repealed this session. A repeal is "not going to happen," McCrory told reporters in Wrightsville Beach, although he wants a portion removed that appears to prevent workers from suing in state court under an employment non-discrimination law.
Moore blamed critics of the law for needlessly putting the state in such a negative light. "The rhetoric just needs to be dialed down because it's just not good for North Carolina," he said in Raleigh.
Berger has said he sees no need for a repeal. He said Monday night he hadn't heard from any colleagues whose support for the law had been swayed based on the protests and economic fallout.
Associated Press 2016