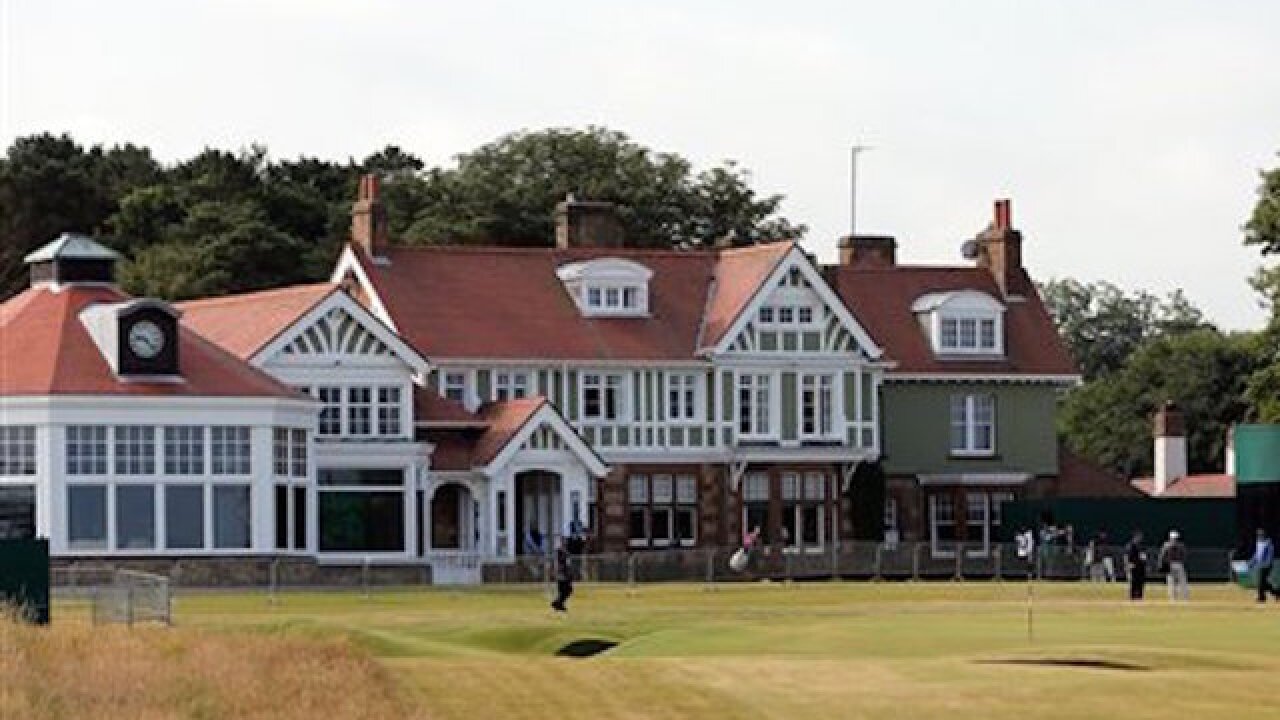 Scott Heppell
<p>FILE - This is a Sunday, July 14, 2013 file photo of the clubhouse at Muirfield golf course in Muirfield. Muirfield, one of the golf clubs that hosts the British Open, has voted against allowing women to become members. The decision was announced Thursday May 19, 2016 after a vote of Muirfieldís 750 members following a two-year consultation process at the Scottish club. (AP Photo/Scott Heppell, File)</p>

Muirfield was stripped of its right to host the British Open after the Scottish club voted against admitting female members in a move that provoked sharp criticism from players and lawmakers Thursday.

The Honourable Company of Edinburgh Golfers, which owns Muirfield, announced its decision to retain the club's male-only policy following a ballot of its members. A two-thirds majority was required for change. Out of 616 members who voted, 36 percent were against allowing women.

Within minutes, the Royal and Ancient, which runs the British Open, said Muirfield was off the list of 10 courses that can host golf's oldest major championship.

"Going forward we will not stage the Championship at a venue that does not admit women as members," R&A chief executive Martin Slumbers said in a statement. "If the policy at the club should change, we would reconsider Muirfield as a venue for The Open in future."

Muirfield has staged the British Open 16 times dating to 1892, most recently in 2013 when Phil Mickelson won. Royal Troon, which hosts this year's tournament July 14-17, is the only other club on the rotation to still exclude women.

"Scotland has women leaders in every walk of life," Nicola Sturgeon, Scotland's first minister, said on Twitter. "It is 2016. This is simply indefensible."

Golfers past and present backed the R&A's stance.

"Gone are the days where you can discriminate in a club," two-time British Open champion Padraig Harrington said from the Irish Open. "The R&A have a bigger responsibility to society, and they've done the right thing."

Four-time major winner Rory McIlroy said golf needed to boost its image against charges of sexism because "it's 2016 and times move on."

Gary Player, who won the British Open at Muirfield in 1959 for the first of his nine major titles, said the club's decision was "simply unacceptable" and said he hoped that Muirfield would reconsider.

Ernie Els has played three Opens at Muirfield, winning in 2002 in a playoff, and said it would be "weird" that such a great links would not be part of the rotation.

"They have their right for their own rules and The Open Championship is going with the sign of the times," Els said from the AT&T Byron Nelson. "It is what it is. I can't say they're wrong and we're right and whatever. ... I'd love to play the tournament at the golf course because it's one of the best links courses in the world, but we're in this situation, and it'll be missed, really. Guys will really miss it because it's a great course.

"I think it's just very clear that they had a vote and the guys just went with what they've had for probably over 100 years, 150 years, however old the club is."

The Royal and Ancient Golf Club at St. Andrews opened its membership to women in 2014 for the first time in 260 years. Royal St. George's, another British Open host, ended its male-only membership last year. Augusta National, home of the Masters, decided in 2012 to invite women to join.

But Muirfield refused to budge in the face of fierce pressure from equality campaigners and lawmakers.

When Muirfield hosted the British Open in 2013, the R&A was heavily criticized for allowing the club to stage the event given its opposition to having female members. A consultation exercise was opened the following year.

Scottish newspaper The Scotsman reported Wednesday that a group of members at Muirfield campaigning against women joining the club had canvassed fellow members, saying "it is accepted that we may have to change, but we should not do so now on the basis suggested."

"A traditional resistance to change is one of the foundations of our unique position in golf and our reputation," the members wrote.

Among the concerns of some members was that female golfers would play too slowly.

Speaking in front of the Muirfield clubhouse, club captain Henry Fairweather said he was disappointed that women would not be admitted but the club had to follow the rules set by its members.

"Women will continue to be welcome at Muirfield on the course and in the clubhouse as guests and visitors, as they have been for many years," Fairweather said.

Troon has separate men's and women's clubs and is consulting members over whether to alter that arrangement.