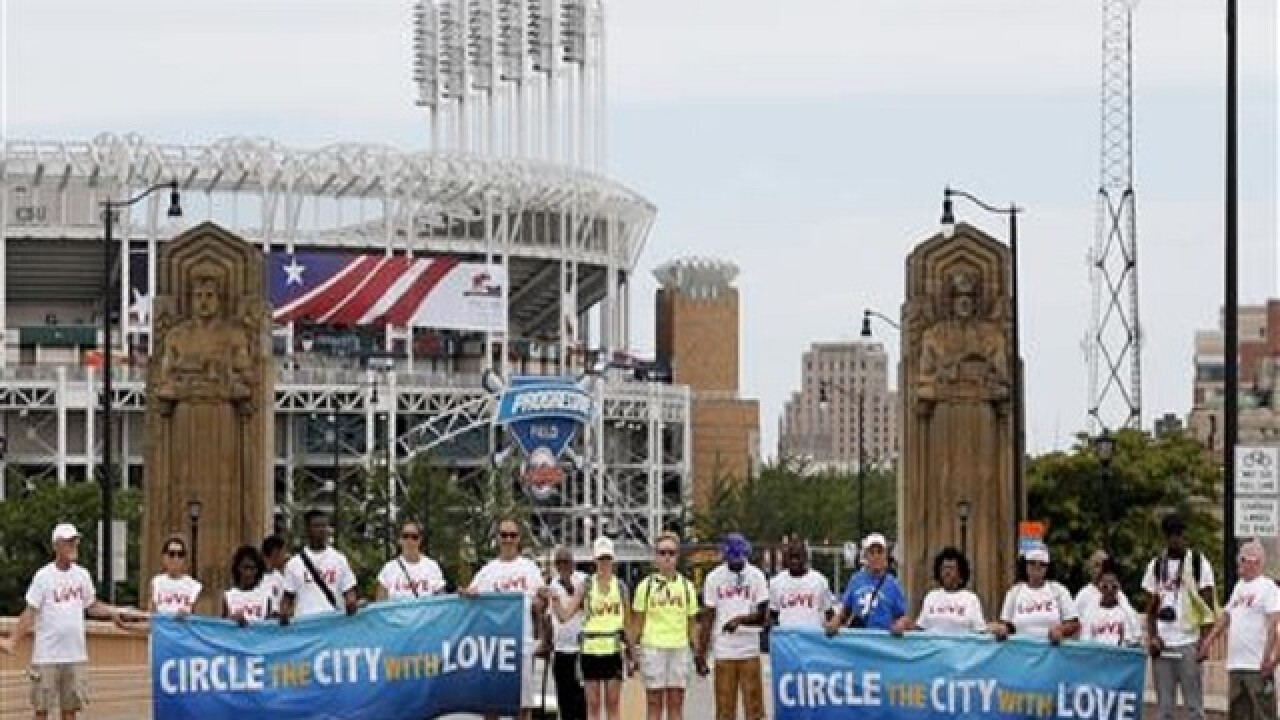 CLEVELAND (AP) — The fatal shooting of three police officers in Louisiana added new concerns Sunday about security at the Republican National Convention as huge crowds were expected to protest and the city police chief prepared officers to deal with the open carrying of weapons as allowed by state law.
Republican Ohio Gov. John Kasich rebuffed a request by the head of the Cleveland police union to suspend that law during the convention, saying he doesn't have the authority to "arbitrarily" alter laws and constitutional rights.
Kasich, who has pushed programs to heal rifts between communities and police after several fatal police shootings, said those bonds must be "reset and rebuilt."
"Everyone has an important role to play in that renewal," said Kasich, who called law enforcement "a noble, essential calling."
Authorities say three officers were killed in Baton Rouge, Louisiana, and three more injured in a shooting less than one mile from local police headquarters.
Sunday afternoon, hundreds of people lined a bridge leading into downtown Cleveland in a peaceful "Circle the City With Love" rally. Participants standing on opposite sides of the bridge from one end to the other held hands and stood in silence for several minutes.
Late Sunday afternoon, a few dozen people began marching in a noisy "Shut Down Trump and the RNC" from east of downtown toward Public Square.
The morning started with Cleveland Police Chief Calvin Williams saying barricades have been placed at key streets and intersections in the city's downtown before the start of the convention to thwart the type of attack that occurred in France when a man drove a large truck into crowds, killing 84 people.
"Things that happen around the country and around the world do affect to some degree how we respond here in Cleveland," Chief Calvin Williams said during an interview on CBS News' "Face the Nation."
There have long been concerns about violent protests and clashes between those who support the presumptive nominee, Donald Trump, and those who oppose the real estate mogul and his inflammatory rhetoric. But recent events, including a terror attack in Nice, France, last week and the fatal ambush of police officers in Dallas and Louisiana have heightened concerns about what might happen in Cleveland.
There have been reports that anarchists and black separatists also plan to protest in Cleveland during the convention, Williams said.
It seems, he said, that "everyone is coming to Cleveland to protest or exercise their First Amendment rights."
An issue on the minds of many is the possibility that people might openly carry firearms during protests, marches and rallies given that Ohio is an open-carry state. Williams said during a morning news briefing that Cleveland police commanders will inform those who choose to open carry what their responsibilities are under Ohio law.
"We try to get across to people, if you carry that weapon, you have that right to do it, but you also have responsibilities to the general public and people around you to make sure that everybody else is safe," Williams said.
A suburban Cleveland man drew attention Sunday afternoon when he stood in the city's Public Square with a semi-automatic rifle strapped over his shoulder and a .45-caliber handgun holstered on his hip. Other members of a northeast Ohio open carry group were supposed to join him.
"What I'm doing today is a statement about the right to bear arms," said Steve Thacker, 57, of Westlake.
Cleveland Mayor Frank Jackson said Sunday during ABC's "This Week" that city officials "aren't strangers to unrest and demonstrations and protests" and insisted that the city is prepared for an event that could draw tens of thousands of people.
The convention is a big moment for Cleveland, which is being hailed as a comeback city thanks, in part, to its revitalized downtown. The city also has drawn unwanted national attention because of high-profile police shootings and use-of-force incidents that helped lead to an agreement with the U.S. Justice Department to reform the 1,500-member police department.
About one third of those officers will be joining thousands of law enforcement officers from around the state and the country in providing security during the convention.
Copyright 2016 The Associated Press. All rights reserved. This material may not be published, broadcast, rewritten or redistributed.