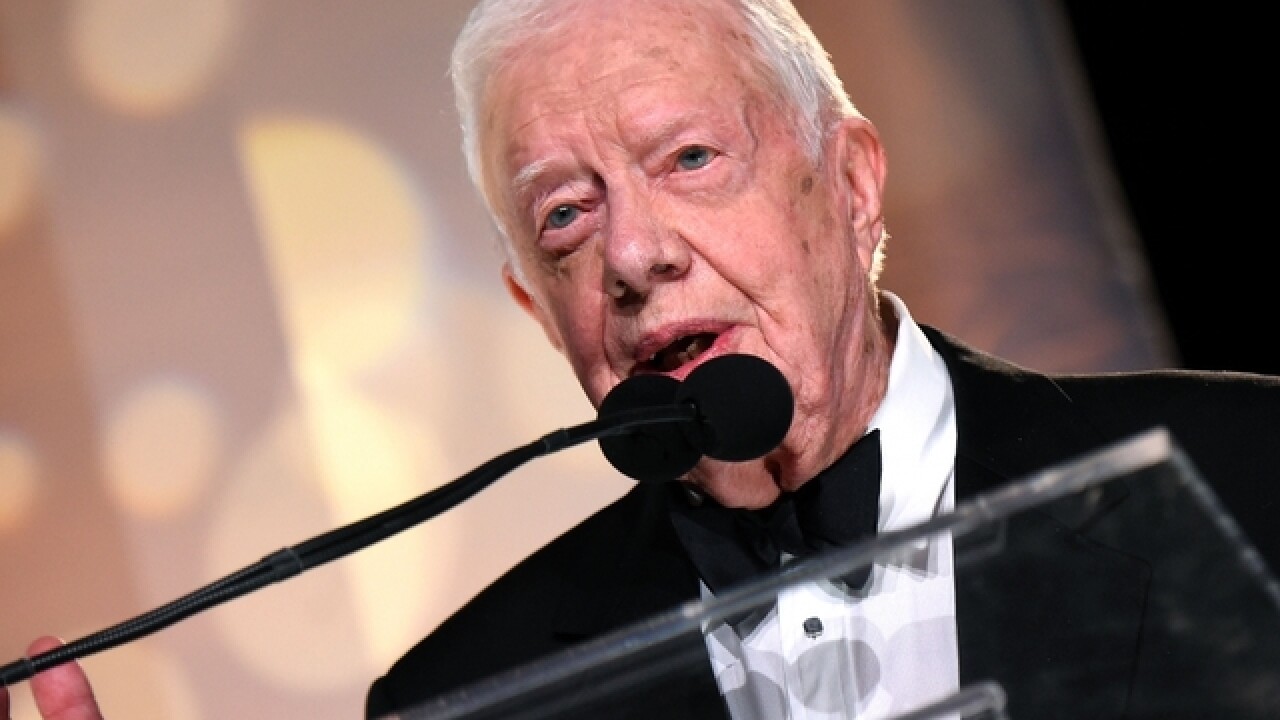 By: CNN
Posted at 6:05 PM, Jan 11, 2017
(CNN) -- President Jimmy Carter wants to outlive Guinea worm disease.
With a grin on his face, twinkle in his eyes and pep in his step, the 92-year-old former president sat down to talk with CNN's chief medical correspondent, Dr. Sanjay Gupta, at the Carter Center in Atlanta on Wednesday morning.
Carter needed no assistance walking up stairs and settling into his chair to discuss the Carter Center's efforts in eradicating Guinea worm disease infections around the world.
The 39th president of the United States appeared to be in good health.
"I'm doing well," he said. "I'm very thankful, of course."
His melanoma fight
In the summer of 2015, Carter announced that he had a deadly form of skin cancer called melanoma, which was first found in his liver before it spread to his brain.
Then, by winter, Carter made another announcement: He was cancer-free.
Along with surgery and radiation, Carter received a new method of treatment called immunotherapy, which utilized his immune system to target cancerous tumors and rid his body of any evidence of cancer.
"The radiation treatment of my brain came first. The actual physical removal of a big part of my liver was effective," he said. "I'd say the new medication has been the key to success, perhaps."
Carter said his brain and body are scanned every three months to monitor his health. Another session of scans is scheduled this week.
"For the last six months, I haven't had any sign of cancer in my liver, part of which was removed earlier, or in my brain, where I had four spots that were cancerous. So far, the treatment has been good," Carter said.
"I'd say that the new treatment, that lets my own body react to cancer without impediment, it's been the most effective new development," he said. "I still hope that I'll be able to survive the last case of Guinea worm."
'Watch out, Guinea worm; here comes Jimmy Carter'
In the mid-1980s, Guinea worm disease, caused by the parasite Dracunculus medinensis, afflicted about 3.5 million people annually in 21 countries across Africa and Asia.
The tropical disease causes painful fevers and grotesque swelling of various parts of the body, including sexual organs, Carter said. Many suffered as worms came out of their bodies.
"My main regret is that when I was president of the United States and had a lot of authority and power and influence, I didn't know about these neglected diseases. I only learned about them after I'd been out of office for a year or so," Carter said.
For decades, the Carter Center has worked with ministries of health in nations around the world to track the number of cases of neglected tropical diseases and to help stop the spread of such diseases by providing health education and programs.
The center also has provided technical and financial assistance to national Guinea worm eradication programs to stop the actual transmission of the disease.
In 2016, the latest year for which data are available, there were only 25 reported human cases of the disease, in three countries: Chad, Ethiopia and South Sudan.
In 2015, there were 22 cases in those same countries, as well as Mali.
Carter announced the latest numbers at a news conference Wednesday.
He also said he plans to attend the inauguration of President-elect Donald Trump next week and to discuss disease-eradicating efforts with members of the Trump administration.
"The progress we have seen in restricting Guinea worm disease to these few cases in only three countries is a testament to the dedication of people in endemic areas to caring for their health and that of their communities," said Dr. Dean Sienko, the Carter Center's vice president of health programs, in a statement. "It's a privilege to partner with them as we tackle this challenge together."
While speaking with reporters, Carter, a Nobel Peace Prize recipient, recalled a trip to a Guinea worm-infested village in Nigeria.
"We were traveling in a big motorcade," he said. "We were driving along, and elementary school children had a big sign that says, 'Watch out, Guinea worm; here comes Jimmy Carter,' That was almost as good as a Nobel Prize for me."
A new exhibition, "Countdown to Zero: Defeating Disease," opened at the Jimmy Carter Presidential Library and Museum in Atlanta on Wednesday, featuring photos, videos and artifacts that illustrate ongoing global efforts to eradicate diseases.
The-CNN-Wire
™ & © 2017 Cable News Network, Inc., a Time Warner Company. All rights reserved.
Copyright 2017 Scripps Media, Inc. All rights reserved. This material may not be published, broadcast, rewritten, or redistributed.