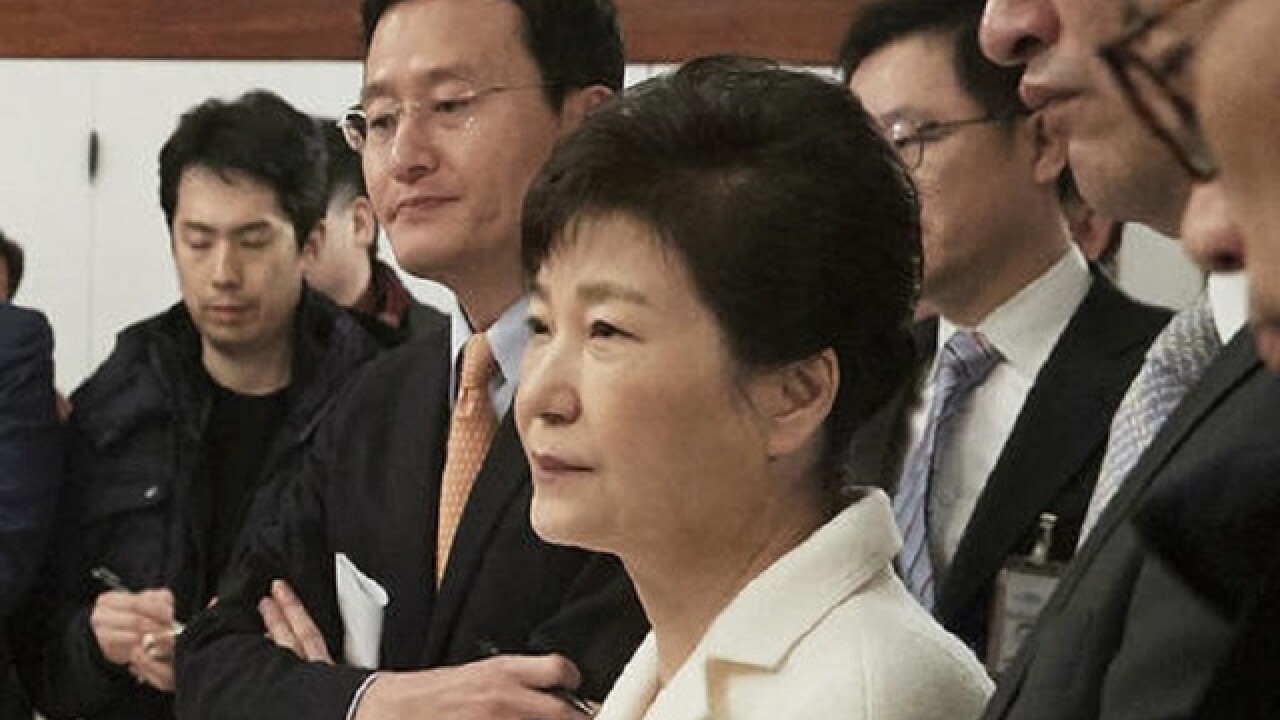 By: Associated Press
Posted at 12:57 PM, Jan 01, 2017
SEOUL, South Korea (AP) — Impeached South Korean President Park Geun-hye vehemently rejected accusations Sunday that she conspired with a longtime friend to extort money and favors from companies, accusing her opponents of framing her.
In a meeting with a selected group of reporters, Park denied that she gave her jailed friend, Choi Soon-sil, extraordinary sway over government decisions and also refuted allegations that her administration blacklisted thousands of artists for their political beliefs.
It was the first time Park spoke to the media since South Korea's opposition-controlled parliament voted on Dec. 9 to impeach her over the scandal, which has seen millions of people protest in Seoul in recent weeks.
Park told the reporters that she was "totally framed."
"The matter is under investigation, so I can't make detailed explanations that might put both sides in trouble, but what I can assure you is that I have never conspired with anyone or did anything to give favors to someone, not even by a bit," said Park, according to the minutes of the meeting provided by her office.
The Constitutional Court has up to six months to decide whether Park should be permanently removed from office or be reinstated. On Friday, the court said Park cannot be forced to testify at her impeachment trial, which is about to enter its argument phase.
Park's downfall came after state prosecutors in November accused her of colluding with her friend to bully companies into giving tens of millions of dollars to foundations controlled by Choi and also allowing Choi to interfere with government decisions from the shadows.
They have now handed over the investigation to a special prosecution team that has been focusing on proving bribery suspicions between Park and the Samsung Group, which is suspected of sponsoring Choi in exchange for government favors.
A former health minister was arrested Saturday over suspicions that he forced the National Pension Service to support a merger between two Samsung affiliates last year.
The deal shaved the fund's stake in one of the companies by an estimated hundreds of millions of dollars, but allowed Samsung scion Lee Jae-yong to promote a father-to-son succession of leadership and increase the group's corporate wealth.
Investigators are trying to confirm whether Park instructed government officials to help the merger go through and then had them press Samsung to provide Choi money and favors.
Park on Sunday defended the government's decision to back the deal, saying it was the "right policy decision" to help one of the country's representative companies defend itself against Elliott Management Corp., a U.S. activist hedge found that unsuccessfully tried to stop the merger. Elliott opposed the merger because it saw the deal as unfairly benefiting members of Samsung's founding family while hurting smaller shareholders.
"It was an important issue, and as president, I thought that it would be good for the National Pension Service to respond well to it," Park said.
She also denied helping Choi extort from companies and said she never allowed her friend to interfere with government affairs.
"I have done my job and made judgments as president; how can you frame things to claim that an acquaintance did everything?" Park said, adding that she managed state affairs based on her "own philosophy and beliefs."
Aside from deliberating on the corruption allegations, the court also plans to review accusations in the impeachment bill that Park was responsible for media restrictions and government inaction during a 2014 ferry sinking that killed more than 300 people, mostly South Korean schoolchildren.
Lawmakers have demanded that Park more thoroughly respond to accusations that she was out of contact for seven hours on the day of the ferry disaster, a sensitive issue because the high number of fatalities was blamed on the government's botched rescue operation.
Park told the reporters Sunday that she had performed her duties and monitored the ferry accident, and denied lawmakers' suspicions that she took time out to receive cosmetic treatment. In 2015, a Seoul court acquitted a Japanese reporter of defaming Park by reporting that she was spending time with a man during those seven hours.
While the special prosecution team is also looking into suspicions that Park's administration blacklisted more than 9,000 artists deemed as unfriendly to the government and denied them government support, Park told the reporters that she knows nothing about it.
Copyright 2016 The Associated Press. All rights reserved. This material may not be published, broadcast, rewritten or redistributed.