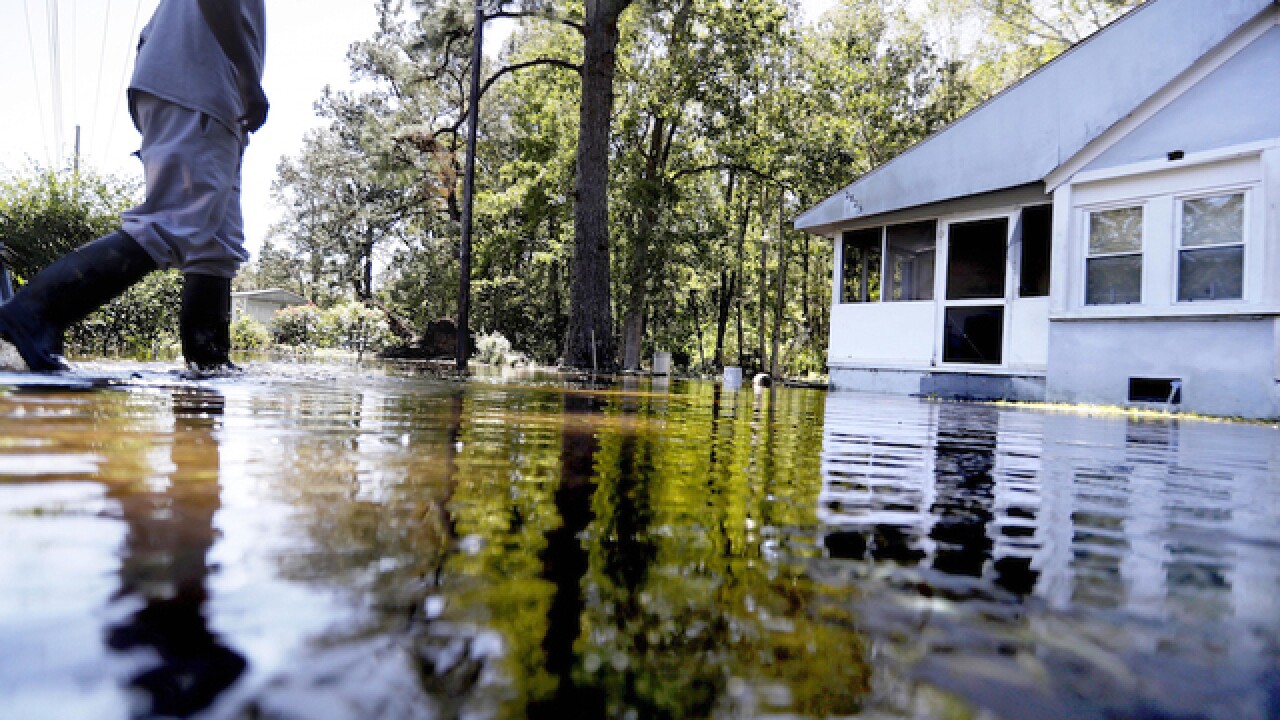 David Goldman
<p>Kyle Simmons wades through water to check on the home of his grandmother following Hurricane Matthew in Edisto Island, Ga., Sunday, Oct. 9, 2016. A deteriorating Matthew was stripped of hurricane status Sunday morning and began making its slow exit to the sea. (AP Photo/David Goldman)</p>

Hurricane Matthew is gone, but the disaster its rains unleashed will slowly unfold all this week as rivers across eastern North Carolina rise to levels unseen since many of the same areas were destroyed by a similar deluge from Hurricane Floyd in 1999.

Emergency planners are now using models that can pinpoint exactly how high the rivers can get and which buildings will be flooded days in advance. But they can't predict dams and levees breaking from the stress of more than a foot of rain in some places.

In Lumberton, a levee broke overnight and crews were scrambling to rescue 1,500 people. Most of them were in knee deep water, but there were people on rooftops waiting for boats or helicopters, North Carolina Gov. Pat McCrory said.

Evacuations were being ordered in cities along three different rivers. Some rivers were expected to be at record levels Friday — six days after Matthew's rains ended.

State resources are being stretched to their limit, and McCrory told the thousands of people being told to leave as rivers rise to heed the warnings.

"If you've been told to evacuate, then evacuate. If you don't we have to divert resources to the area to save you," the governor said Monday.

Immediately after Saturday's rains, thousands of people found themselves suddenly trapped in homes and cars during the torrential rains. Rescuers in Coast Guard helicopters plucked some of them from rooftops and used military vehicles to reach others, including a woman who held on to a tree for three hours after her car was overrun by flood waters.

The storm killed more than 500 people in Haiti and at least 21 in the U.S. — nearly half of them in North Carolina. Most were swept away by flood waters.

McCrory and others fear the death toll may rise as impatient people drive around road barricades into swiftly moving floodwaters.

The National Hurricane Center issued its last advisory on Matthew at 5 p.m. Sunday when the storm was about 200 miles off the North Carolina coast.

Princeville, a town of 2,000 that disappeared in the waters of the Tar River during Floyd, was evacuated Sunday. The river was expected to rise to 17 feet above flood stage by late Monday — a level not seen since Floyd, which was another storm whose eye brushed by North Carolina's coast but poured 15 to 20 inches of rain inland.

McCrory expected more evacuations as some rivers were predicted to crest next Friday.

David Bullock's sister called him as he bought lottery tickets to tell him police were knocking on doors in Princeville saying they had to go. He rebuilt his home after the 1999 flood.

Several sections of Interstate 95 — the main artery linking the East Coast from Florida to Maine — were closed in North Carolina.

The levee break in Lumberton County poured even more water on the interstate and McCrory said it is impossible to determine when the highway might reopen.

The Lumber River in Lumberton crested 4 feet above its record level Sunday afternoon and was forecast to remain above its previous record until at least next Saturday.

In addition to the 10 deaths in North Carolina, there were four in Florida and three each in Georgia and South Carolina. One death was reported in Virginia on Monday.

Some were killed by falling trees, others by carbon monoxide fumes from a generator. One 66-year-old man near Columbia, South Carolina, died at a nursing facility when he got pinned under his electric wheelchair in water.

Nearly 1 million homes and businesses still did not have power Monday morning in North Carolina and South Carolina. Authorities in coastal Georgia and South Carolina warned residents it may take days or even weeks to restore electricity and clean up all the debris left behind by the winds and ocean flooding.

Matthew killed more than 500 people in Haiti last week, plowing into the desperately poor country at 145 mph. The fearsome storm then sideswiped hundreds of miles of the U.S. coastline from Florida through Georgia and the Carolinas, its eye staying far enough offshore that the damage in many places along the coast was relatively modest, consisting mostly of flooded streets, flattened trees and blown-down signs and awnings. A shift of just 20 or 30 miles could have meant widespread devastation nearer the ocean.

An estimated 2 million people in the Southeast were ordered to evacuate their homes as Matthew closed in.