Harambe to Hatchimals: What got America talking in 2016 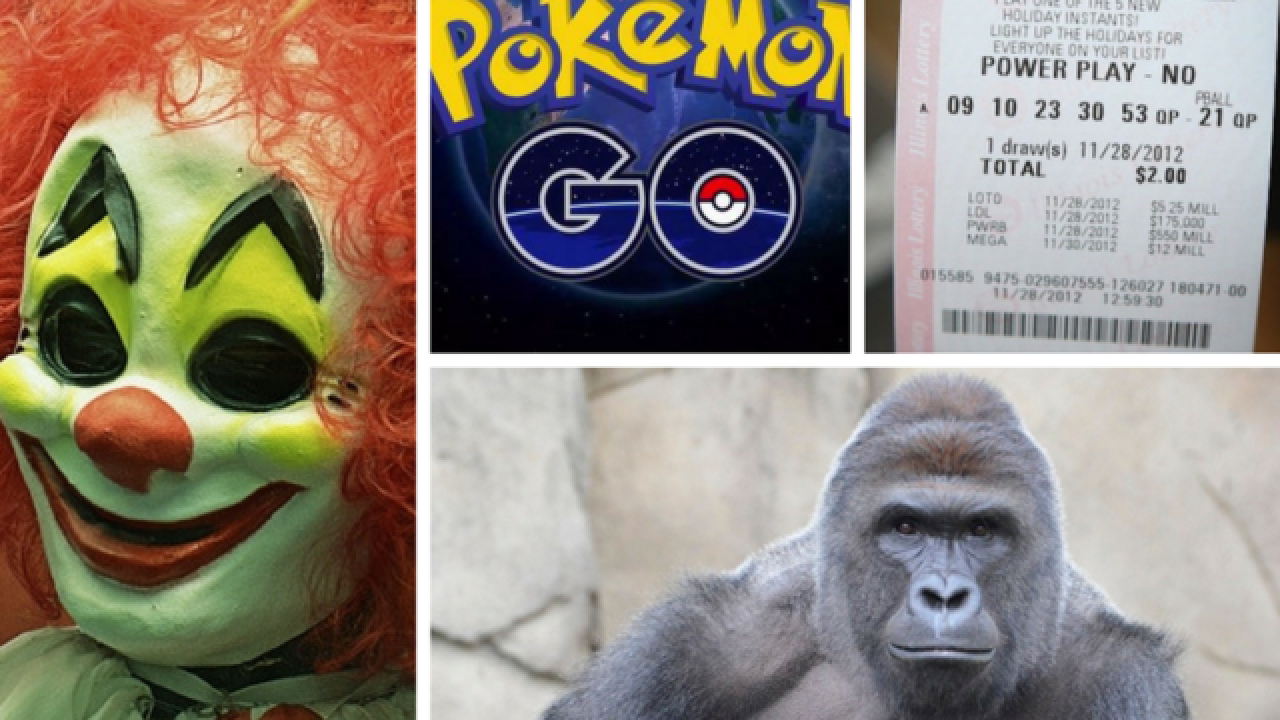 <p>From Harambe to Hatchimals, these stories trended throughout America in 2016.</p>

In a lot of ways, 2016 was a rough year. The United States held one of its most decisive elections in its history, terrorism struck in all corners of the world and we lost dozens of our most beloved artists, athletes and politicians.

But what got Americans talking between the hard news and obituaries? Here's what trended in the United States throughout 2016.

Jackpot
The country was gripped with Powerball fever in January, as the nationwide lottery went without a winner for months. After the jackpot ballooned to a record-shattering $1.6 billion, it was announced that the prize would be split by three winners in Florida, Tennessee and Los Angeles. They overcame 1 in 292.2 million odds to pick the winning numbers: 4-8-19-27-34 and a Powerball number of 10.

The death of a gorilla, birth of a meme
A family’s Memorial Day weekend trip to the Cincinnati Zoo turned tragic in May when a young boy climbed through a barrier and fell into the zoo’s gorilla pit . Zoo officials were forced to shoot and kill a 17-year-old gorilla named Harambe after he grabbed the child and dragged him through the exhibit.

The gorilla’s death sparked internet outrage from animal activists and parents alike, and spurred hundreds of columns , think pieces and blog posts . But as the posts continued to pour in over the ensuing weeks, they became less and less sincere. By mid-summer, Harambe had been given new life as an internet meme.

Today, Harambe lives on in Twitter bios, T-shirts, and customized NFL jerseys — much to the chagrin of the Cincinnati Zoo, which was forced to delete its Twitter account after the fiasco.

Gaming truly goes mobile
Pokemon Go changed the landscape of gaming when it debuted in July, forcing players to get off their couch and head outside in a real-life scavenger hunt for virtual creatures. Just days after the cell phone game was released, more than 10 million people were playing it every day.

But the game received its fair share of negative headlines . Reports emerged of players finding dead bodies, falling off cliffs and crashing cars while searching for Pokemon.

A complicated Olympics
While it may have been overshadowed by another institution that occurs once every four years, the 2016 Olympics offered plenty of highs and lows. Swimmer Michael Phelps made a triumphant final return to the Olympic stage — while some pools turned green for unexplained reasons. Team USA brought home the most medals — but had to deal with Ryan Lochte’s embarrassing scandal . Rio de Janeiro managed to host the games with minimal glitches — but failed to offer long term improvements for one of the world’s poorest cities.

Exploding phones
The Samsung Galaxy Note7 was among the highest-selling smartphones in 2016. But after reports spread that the phone’s silicon battery was overheating a catching fire , Samsung announced in September it would offer a free replacement device to those who purchased the phone.

When clowning goes too far
Some people got a bit too into the Halloween spirit this year. In what became a disturbing nation-wide trend, sightings of men and women dressed as creepy clowns became almost a daily occurrence from late August until October.

The clowns frightened and chased children , forced school closures and even offered to kill . Luckily, the sightings have slowed since Halloween.

Stuffed animal eggs?
Every holiday season has its must-have toy, and 2016’s is without a doubt “Hatchimals.” The toy begins as an egg, which needs to be nurtured and cared for before it hatches into a stuffed animal — and every Hatchimal offers its own surprise.

Stores have been unable to keep the toys in stock , causing parents to either stand in line for hours when shipments arrive or head to eBay to spend up to three times their retail value.