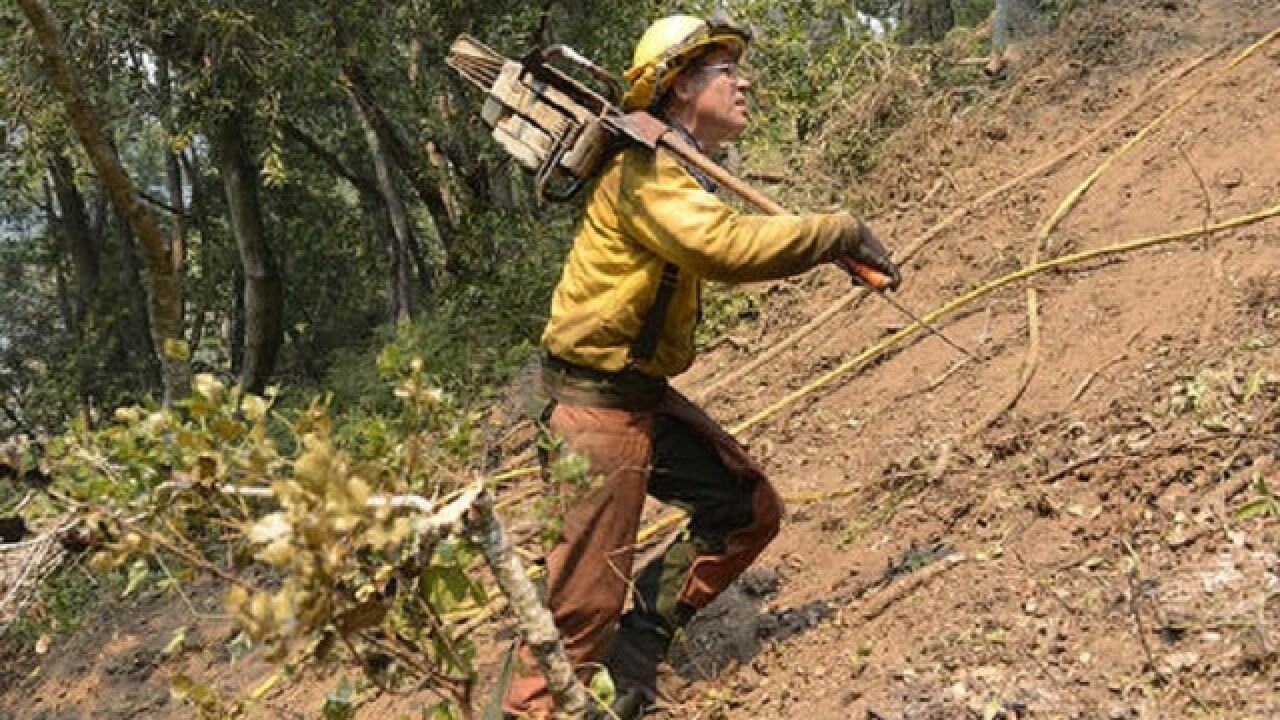 David Royal
<p>Timber faller Jeff Turpin hikes up a hillside with his chainsaw in while cutting a fire break for a wildfire in Carmel Valley, Calif., Saturday July 30, 2016. Fire officials say a wildfire burning near California's dramatic Big Sur coast has destroyed dozens homes and is threatening over a 1,000 more. (David Royal/The Monterey County Herald via AP) MANDATORY CREDIT</p>

BIG SUR, Calif. (AP) — Crews battled a massive wildfire near California's Big Sur that is threatening thousands of homes as it burns for the tenth day, while a much newer fire in Fresno County quickly spread, damaging homes as it grew to more than two square miles Sunday.
The newer blaze had damaged some of the 300 evacuated homes in the area, but it wasn't yet clear how many, the California Department of Forestry and Fire Protection said.
The fatal blaze north of Big Sur grew overnight to 59 square miles (152.81 square kilometers), state fire officials said.
The wildfire has destroyed 57 homes and 11 outbuildings and is threatening 2,000 more structures. It was 15 percent contained Sunday morning.
More than 5,000 firefighters are battling the wildfire that killed a bulldozer operator working the fire line.
The blaze, about the size of San Francisco, has also scared away tourists who are cancelling bookings after fire officials warned that crews will likely be battling a wildfire raging in steep, forested ridges just to the north for another month.
In Central California, the fast-moving fire is being fueled by hundreds of dead trees amid triple-digit temperatures and single-digit humidity that are expected to last for several days. Residents of the rural area surrounded by rolling hills told reporters they scrambled to evacuate with their animals as the wind-driven blaze swept through dry slopes.
"We watched it explode, coming across Old Millerton Road, and it just keeps getting bigger and bigger," resident Dana Bays told KFSN-TV.
The 2.3-square-mile (5.96-square-kilometer) wildfire started Saturday afternoon south of the town of Prather about 30 miles northeast of Fresno. The blaze was 5 percent contained Sunday, Cal Fire said.
Highway 168, closed from Millerton Road to Auberry Road in Prather, reopened Sunday, the Fresno County Sheriff's Office said.
On the outskirts of Los Angeles, crews had nearly surrounded a 65-square-mile (168.35-square-kilometer) blaze that killed one man and destroyed 18 homes. That fire was 93 percent contained Sunday, nine days after it broke out in suburban Santa Clarita and spread into the mountainous Angeles National Forest, officials said. Authorities have not determined the cause.
Copyright 2016 The Associated Press. All rights reserved. This material may not be published, broadcast, rewritten or redistributed.