Less than two weeks after announcing that he had contracted COVID-19, Sen. Mike Lee, R-Utah, appeared at Judge Amy Coney Barrett's confirmation hearing in-person on Monday and delivered his opening remarks without a mask.

On Oct. 2, Lee announced that he had tested positive for COVID-19. He was one of about a dozen high-ranking government officials — including President Donald Trump — who attended Barrett's Sept. 26 nomination ceremony at the White House and later contracted the virus.

Lee said he had received a letter from Congress's attending physician, Dr. Brian Monahan, clearing him to return to his in-person duties — though the letter did not note that Lee had tested negative for the virus.

"Based upon current CDC guidelines, you have met criteria to end COVID-19 isolation for those with mild to moderate disease," Monahan's letter read. "Specifically, it has been greater than 10 days since symptom onset, you have had no fever in absence of fever reducing medication for at least 24 hours, and your other symptoms have improved. The CDC does not recommend repeat SARS-CoV-2 PCR testing if these criteria are met.”

It's unclear if Lee was tested prior to appearing in the Capitol Building on Monday. A call to Lee's press office in Washington was not returned.

Lee was wearing a mask when entering the hearing room, and photos show that he continued to wear one when not speaking. However, Lee did remove his mask for his opening statements. 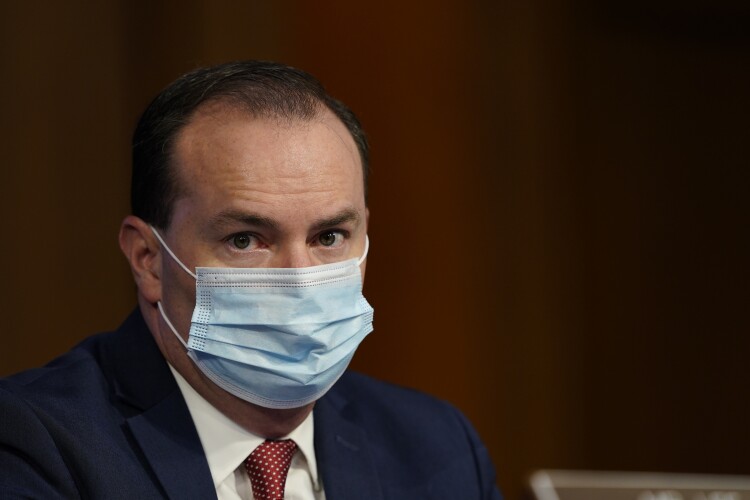 Sen. Thom Tillis, R-North Carolina, a Committee member who announced a positive COVID-19 test the same day that Lee did, chose to deliver his opening statements via teleconference.

Lee's appearance comes after Senate Judiciary Committee Chairman Lindsey Graham refused to take a COVID-19 test ahead of a debate against his Senate seat challenger, Jaime Harrison. Graham's refusal to take a test forced a change in format for the weekend debate.

During his opening comments, Leahy claimed that Republican senator's aversion to COVID-19 tests was a political tactic to remove any risk that would delay Barrett's nomination until after election day.

In his opening remarks, Graham said that his committee had consulted with Monahan and the Capitol architect officials to set up the hearing room "in a fashion we can safely do our business."

Following senators' opening statements, Graham explained that the Capitol architect had deemed the hearing room to be in compliance with CDC social distancing guidelines. He said that he wanted to make sure the room was safe but added that like the rest of America, the Senate needed to get "back to work."

He also added that he had tested negative "last Friday" following brief contact with Lee, and said that he would not be tested for the virus at the request of "political opponents."

Earlier this year, Monahan asked senators to wear masks while on the Senate floor. House Speaker Nancy Pelosi has required them for lawmakers.

President Donald Trump — who announced his positive COVID-19 test the same day as Lee and Tillis — has also already resumed in-person activities. He's reportedly been working in the Oval Office, he delivered an address at the White House Saturday in front of hundreds of supporters, and he's scheduled to hold a large rally on Monday evening in Florida.