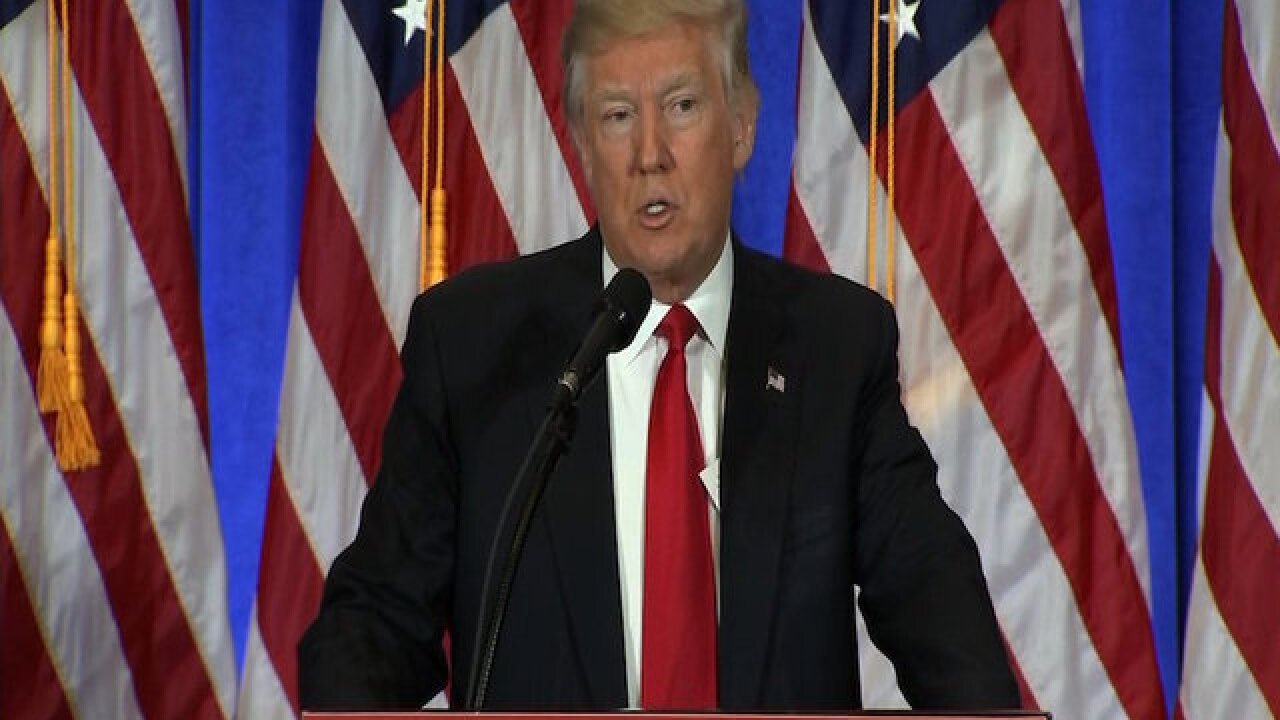 CNN
Pool
<p>President-elect Donald Trump's transition team is engaged in active discussions with the US Army Corps of Engineers and Interior Department to begin planning a wall along the Mexican border, including how specific environmental laws could get in the way, CNN has learned.</p>

WASHINGTON (CNN) -- Donald Trump will become president Friday with an approval rating of just 40 percent, according to a new CNN/ORC Poll, the lowest of any recent president and 44 points below that of President Barack Obama, the 44th president.

Trump's wobbly handling of the presidential transition has left most Americans with growing doubts that the President-elect will be able to handle the job. About 53 percent say Trump's statements and actions since Election Day have made them less confident in his ability to handle the presidency, and the public is split evenly on whether Trump will be a good or poor president (48 percent on each side).

The same people who did the phony election polls, and were so wrong, are now doing approval rating polls. They are rigged just like before.

Rep. Sean Duffy, a Trump supporter, said the President-elect's ongoing battle with the media has hurt his image.

"What's happening here is the public fight that Mr. Trump is having with CNN and other media groups has taken some skin off his poll numbers and it's gone down," he told CNN's Chris Cuomo Tuesday on "New Day."

A closer look at the numbers

Across all three of these measures, Americans' impressions of Trump have worsened since November. In that time, disapproval of his handling of the transition has climbed seven points to 52 percent, the percentage who think he'll do a good job has dropped five points, and the share saying they have lost confidence in Trump's ability to be president grew 10 points.

Trump's favorability rating, a measure often seen as a read on a public figure's personality rather than the job he or she is doing, has taken less of a hit, decreasing by just 3 points to 44 percent. That change falls within the poll's margin of sampling error and is not statistically significant.

Despite these declines, many Americans remain confident that Trump will achieve several signature campaign promises, with most saying it's at least somewhat likely that he will impose tariffs on companies that manufacture goods in Mexico (71 percent), renegotiate NAFTA (61 percent) and create good-paying jobs in economically challenged areas (61 percent).

About half think Trump will be able to simplify the tax code (50 percent) or protect sensitive electronic information from theft by foreign governments (48 percent). Fewer, 44 percent, say it's likely that Trump will be able to build a wall along the border with Mexico, and just 29 percent believe he will be able to get Mexico to reimburse the United States for the construction of the wall. About 4-in-10 think the President-elect will be able to defeat ISIS, down from 50 percent who said so in November.

More broadly, less than half say Trump's priorities for the country reflect their own (46 percent say so), and the country is almost evenly divided on whether the policies he's proposed will move the country in the right direction or the wrong one (48 percent right direction, 49 percent wrong direction).

The poll suggests the deep political divisions that drove the 2016 presidential campaign -- between men and women, whites and racial minorities, those holding college degrees and those without and rural residents and those in more urban areas -- continue unabated as Inauguration Day approaches.

The incoming vice president, Mike Pence, holds a narrowly net-positive favorability rating, 40 percent favorable to 37 percent unfavorable. Republicans rate Pence slightly lower than his new boss, 75 percent have a favorable view of the VP-to-be while 89 percent have a positive take on Trump. Among Democrats, however, Pence earns higher marks than Trump, 16 percent see him favorably vs. 9 percent who say so about Trump.

Opinions on Melania Trump are mixed, with a sizable share still unsure how they feel about the incoming first lady (36 percent favorable, 35 percent unfavorable, 28 percent unsure). And after a campaign in which she largely remained off the trail, most say they expect her to take on a mostly private role as first lady rather than a public one. About two-thirds (67 percent) say they see her remaining more in the background and focusing on her role as a mother and wife than being an advocate for issues and causes and hosting White House functions.

Trump's daughter, Ivanka, who is moving to Washington, heads into her role in the first family with more goodwill than her father or the future first lady. Overall, 44 percent have a favorable impression of her, 33 percent unfavorable, with 23 percent saying they're unsure.

The CNN/ORC Poll was conducted by telephone January 12-15 among a random national sample of 1,000 adults. Results for the full sample have a margin of sampling error of plus or minus three percentage points; it is higher for subgroups.