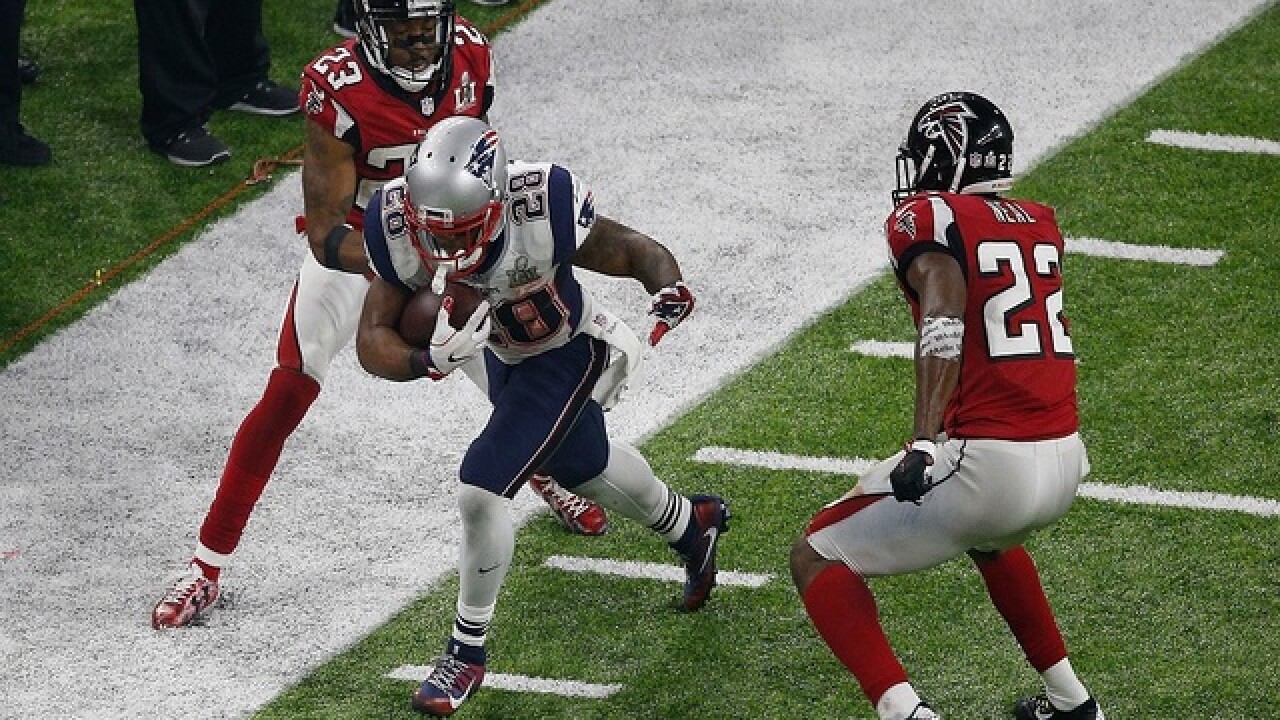 Copyright 2017 Scripps Media, Inc. All rights reserved. This material may not be published, broadcast, rewritten, or redistributed.
Bob Levey
<p>HOUSTON, TX - FEBRUARY 05: James White #28 of the New England Patriots carries the ball against the Atlanta Falcons during the fourth quarter during Super Bowl 51 at NRG Stadium on February 5, 2017 in Houston, Texas. The New England Patriots defeated the Atlanta Falcons 34-28. (Photo by Bob Levey/Getty Images)</p>

By: CNN
Posted at 9:24 PM, Feb 09, 2017
(CNN) -- Running back James White may have scored the winning touchdown for the New England Patriots in Super Bowl LI on Sunday, but he didn't win the game's Most Valuable Player award.
On Thursday, Conan O'Brien did what he could to soften that blow a bit.
The TBS late night host had White on during his opening monologue Thursday night to discuss the Patriots victory Sunday -- which was the largest comeback in Super Bowl history.
After White scored the winning touchdown in overtime, Patriots quarterback and this year's Super Bowl MVP recipient Tom Brady said that White deserved the Super Bowl MVP award instead of himself.
That included all the spoils that went along with it. And once upon a time, that included a new car.
But players no longer receive a new car for winning the game's MVP trophy. Despite White not winning the award officially, and that part of the official prize having been discontinued, O'Brien and Ford surprised White on Thursday night's show with a new Ford 150 truck.
"That's right, you can have this truck for 24 hours," O'Brien said, jokingly.
The host, whose show is based in Los Angeles, then laughed with White telling him he'll have to now "drive back to Boston."
This isn't the first time that O'Brien, who is a huge Patriots fan, has had some fun with players from the team.
Last week O'Brien had Brady and other Patriots play video games in the Super Bowl edition of his popular segment "Clueless Gamer."
O'Brien's big surprise takes place on TBS' "Conan" at 11 p.m. ET on Thursday night.
The-CNN-Wire
™ & © 2017 Cable News Network, Inc., a Time Warner Company. All rights reserved.
Copyright 2017 Scripps Media, Inc. All rights reserved. This material may not be published, broadcast, rewritten, or redistributed.