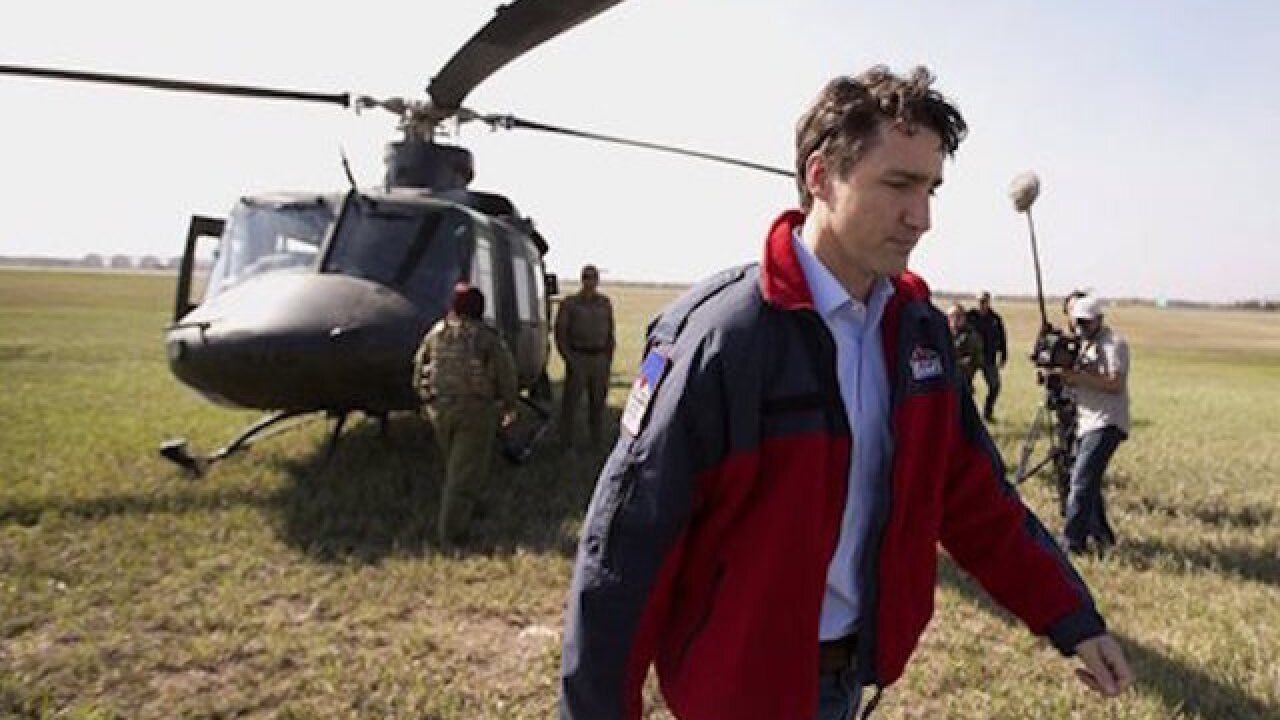 FORT MCMURRAY, Alberta (AP) — Prime Minister Justin Trudeau says most Canadians have yet to grasp the lengths to which firefighters went to save nearly 90 percent of the oil sands capital of Fort McMurray from a massive wildfire that forced the evacuation of more than 88,000 people.

Trudeau visited the devastated northern Alberta city on Friday almost two weeks after the wildfire ignited, tearing through the isolated region and surrounding areas, causing several oil sands operations to shut down. Alberta officials say they will have a plan within two weeks for getting residents back into their homes.

Trudeau took a helicopter ride over a patchwork of devastated neighborhoods, where some homes still stand while others burned to their foundations. Alberta officials say 2,432 structures have been destroyed, 530 damaged and 25,000 saved. Despite the savage fire, officials said 85-90 percent of the city has been saved.

"I don't think Canadians yet understand what happened. They know there was a fire. They're beginning to hear the wonderful news that so much of the town was saved," he told 150 firefighters and first responders after his aerial tour by military helicopter of Fort McMurray.

Trudeau toured one of the city's damaged neighborhoods after his visit with first responders and volunteers before meeting with Alberta Premier Rachel Notley.

In the forest surrounding the Fort McMurray airport, where Trudeau landed, trees looked like little more than used match sticks, charred right up to the tarmac, and the ground was blackened.

"When I got a chance to fly over the community, the first thing you notice is the smoke, the haze, the smell in the air. Even from the airport, which was untouched, you can tell the scale and the scope of what just happened. And then you notice the blackened forest that surrounds Fort McMurray... entire swaths of burned out trees and hillsides," Trudeau said during an evening news conference.

He told of the moment when he saw a small plastic child's scooter on the sidewalk as he toured the city.

"The one thing I realized, unlike so many images we've seen, that little plastic scooter, whatever little boy or girl was using that just before the evacuation, they're safe. They're alive," he said. "They're being sheltered by friends or family or kind strangers."

"Yes, this was a terrible disaster to befall this community but there is strength here and a will to build a stronger future," Trudeau added.

The prime minister and Notley, who also spoke during the evening press conference, took the opportunity to thank the first responders, the evacuees, and Canadians who donated funds to the Red Cross, sent shipments of care packages or opened their homes to those who had to flee the fire.

"When we stick together and when we have each other's backs, we are all stronger," said Notley.

Fort McMurray Fire Chief Darby Allen, who led the fight against the fierce fire, said having the prime minister visit is a morale boost.

"Right now the residents aren't there, but there are hundreds and hundreds of emergency workers. I think they'll get a lift from that," he said.

Melissa Blake, mayor of the Regional Municipality of Wood Buffalo, accompanied Trudeau, saying it was critical for him to tour the burned neighborhoods.

"Once you see it, you know not just how daunting the work will be, but how important it is to make it back to what it was before," she said.

Trudeau was also accompanied by some federal cabinet ministers, who are part of a special committee that will coordinate aid and reconstruction efforts in the city.

Alberta Member of Parliament Kent Hehr, who heads the special committee, said it's important to show people that the federal government will be there for them in the reconstruction.

"It's very difficult for me as an Albertan" to witness the damage, said Hehr, who represents a Calgary district.

More than 80,000 residents had to evacuate their homes May 3 as the flames carved a destructive path through the city.

The fire is now 930 square miles (2,410 square kilometers) in size and has moved away from the city. It's expected to burn in forested areas for at least a few more weeks.

The more than 80,000 evacuees have begun receiving direct financial assistance from the Alberta government and the Canadian Red Cross as officials asked for patience in getting residents home.