Can the women's marches become a women's movement? 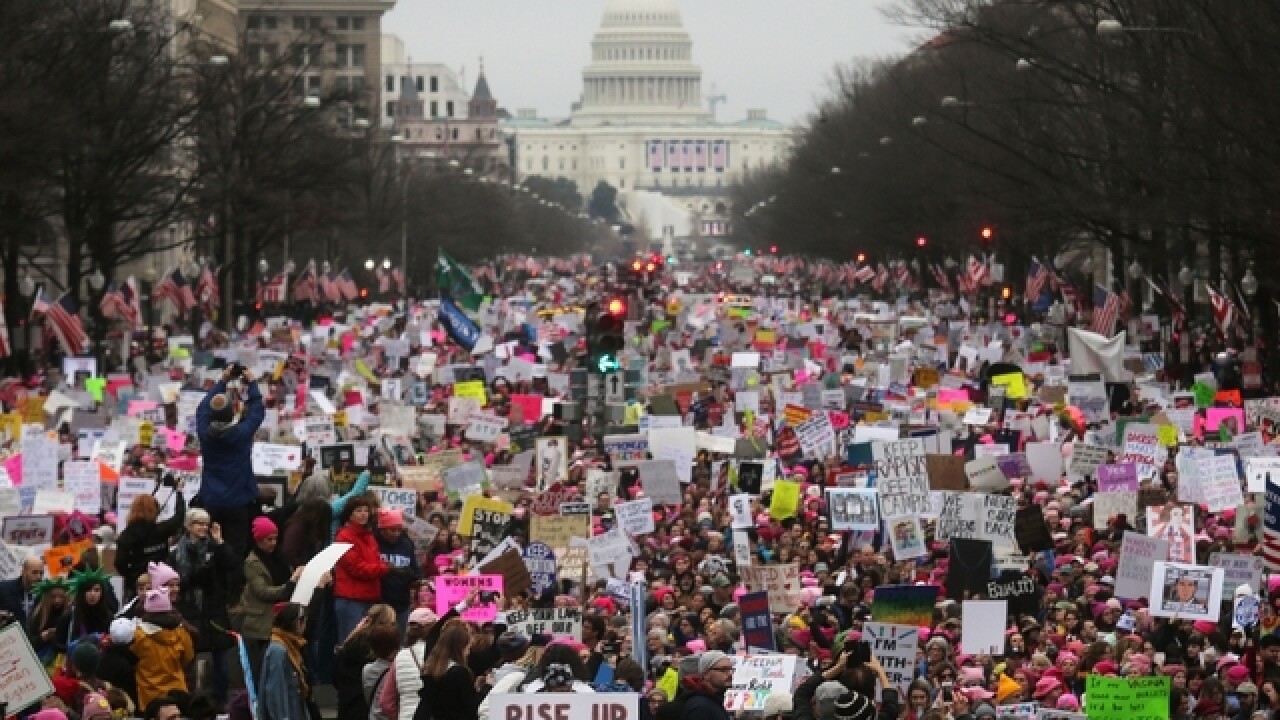 Women’s Marches across the country and globe blew many attendance expectations out of the water Saturday, making a solid statement on President Donald Trump’s first full day in office. But many are now wondering: what’s next?
“No one action can be a movement. It has to build, to accelerate and take the word movement literally,” said Ellen Dubois, a professor of history and gender studies at UCLA.  “Then it needs a concrete goal, even if it is as ambitious as impeachment.”
At the Women’s March on Washington, an estimated 500,000 attendees took to the streets to protest various issues.
At the core of the march were two messages, one staunchly against President Donald Trump’s win, and the other a forceful call to protect and help women’s rights.
Both of those issues, Dubois said, are directly tied to the fact that the person who lost to Trump was female. But there were other topics being protested, too, such as racism, and environmental policies, and gun control.
The various messages from the march were at times hard to boil down into one cohesive demand -- and that, experts say, could keep the Women’s March from turning into a women’s movement.
“The kinds of things that make for a big march and a big movement are very different,” said Michael Heaney, a political sociologist at the University of Michigan, who studies movements and protests. “The march showed that there is a lot of anger that can be linked specifically to gender.”
Heaney attended the Women’s March to study it, and based on what he saw, said that it has the potential to last.
He noted that the effort’s message was all-inclusive because it did not narrow itself into a smaller category, such as being specifically for black women or the LGBT community. He noticed that the women who attended seemed to respond well to its general nature.
How that boils down into concrete legislative change down the line though, he said, gets murkier.
“Being successful legislatively requires more focus. All I can tell you is that this march shows great potential. Whether it means that there is a new women’s movement I don’t know,” said Heaney.
Matt Dallek, associate professor of political management at the George Washington University, said that it’s likely the women’s movement could go one or two ways: It could flicker out like the Occupy Wall Street movement, that protested big banks’ tax breaks in 2011 and 2012, or it could organize to create legislative change similar to what the Tea Party did following Barack Obama’s election in 2009.
Occupy Wall Street, Dallek said, was successful at getting supporters but not clear enough in its message. At the end of the day, it never put forth a tangible goal.
The Tea Party, on the other hand, organized itself around a mutual disdain for Obamacare and government taxation. It was successful at getting supporters elected into office and later was able to hold members of congress accountable to their Tea Party constituents because they came out to the polls in large numbers—especially in off years.
As Dubois put it, “the march is starting out big from the beginning.” And it appears that organizers are committed to making the Women’s March last.
The day after the march, the group sent out its new initiative of 10 actions in 100 days. The first action called for women to write letters to their senators—although there was no guidance for what policy specifics should be said in that letter.
Emily’s List, a political action group that backs pro-life women office seekers, is also working in conjunction with the march to give it lasting power. On Sunday the group held a training event in Washington, D.C. for 500 female volunteers interested in learning how to run for office.
Copyright 2017 Scripps Media, Inc. All rights reserved. This material may not be published, broadcast, rewritten, or redistributed.