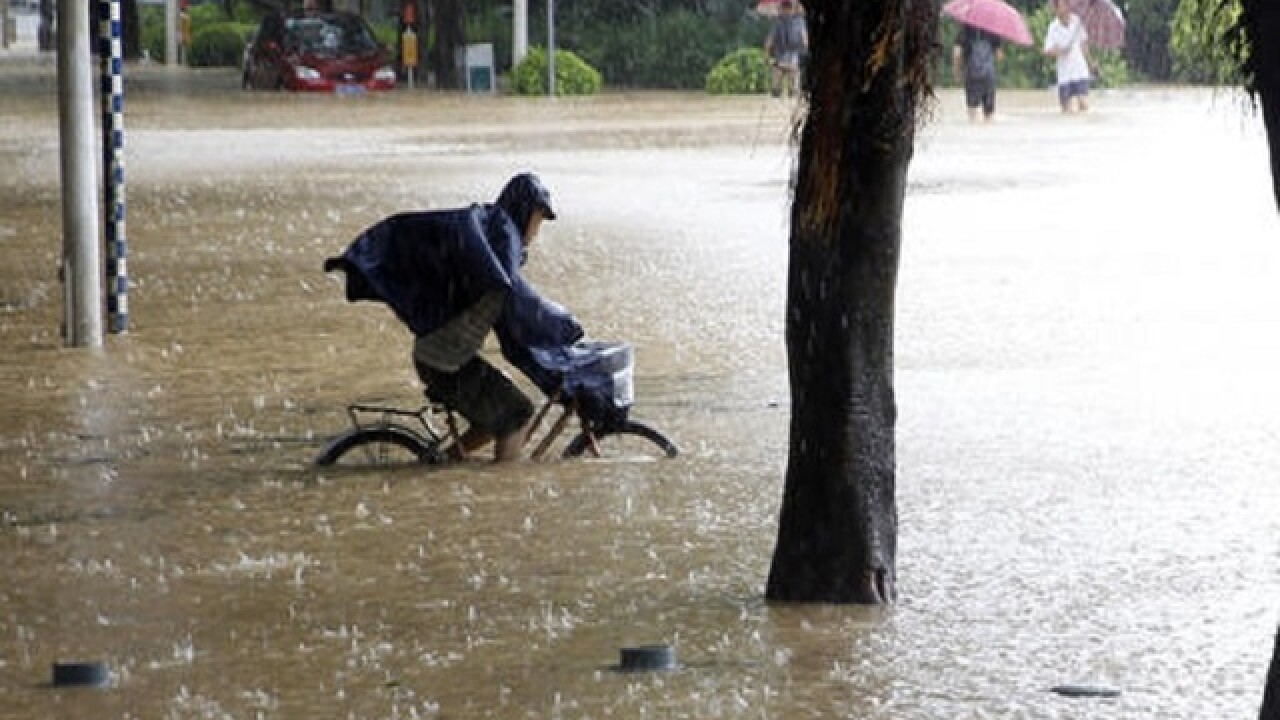 Uncredited
<p>A man bicycles through a flooded street after the landfall of Typhoon Megi in Fuzhou in southeastern China's Fujian Province Wednesday, Sept. 28, 2016. A massive typhoon made landfall in eastern China Wednesday, a day after carrying strong winds over Taiwan that felled trees and scattered debris, killing several people and injuring hundreds. (Chinatopix via AP)</p>

BEIJING (AP) — At least 32 people were reported missing Thursday after rain-saturated hillsides collapsed onto villages in southeastern China following a typhoon.
A rescue operation was underway in Sucun village in China's Zhejiang province, south of the financial hub of Shanghai, after it was hit by a landslide on Wednesday evening, leaving 26 missing, the state-run Xinhua News Agency reported.
Another six people are missing in Baofeng village, also in Zhejiang, after a landslide destroyed their homes.
The landslides were triggered by torrential rain brought by Typhoon Megi, which lashed southeastern China on Wednesday. The storm had already killed at least five people in China and Taiwan, and forced the closure of schools and offices and the cancellation of hundreds of flights.
State broadcaster CCTV showed rescue crews, accompanied by sniffer dogs, combing through piles of mud and rock in the mountainous, forested areas.
Megi caused more than $10 million in damage as it swept across Taiwan before weakening into a tropical storm after hitting the coastal city of Quanzhou in China's Fujian province early Wednesday. At its height, it was packing winds of up to 118 kilometers (74 miles) per hour, China's National Meteorological Center said.
In Fuzhou, Fujian's capital, people were shown on state television walking through knee-deep waters that had swamped major roads. Rescue workers were seen pulling stranded residents through the streets on inflatable boats.
Taiwan's Central Emergency Operations Center reported that 625 people were injured by Megi, including eight Japanese tourists whose tour bus flipped on its side. Three people suffered fatal falls and a fourth person died in a truck crash, Taiwan's Central Emergency Operations Center said.
Megi dropped 300 millimeters (12 inches) of rain in the south and eastern mountains of Taiwan, and more than 220 flights were canceled at Taiwan's Taoyuan International Airport.
It was the fourth typhoon to hit Taiwan this year and the third in two weeks.
Copyright 2016 The Associated Press. All rights reserved. This material may not be published, broadcast, rewritten or redistributed.