Company speaks out on firing of marijuana user

You ask, we investigate. 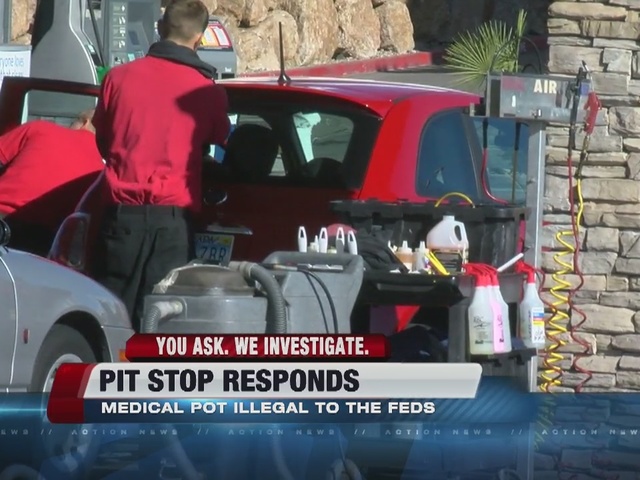 By: David Schuman
Posted at 6:57 PM, Jan 18, 2016
UPDATE: Pit Stop Car Wash released the following statement to Action News regarding this story:
"At Pit Stop, the safety of our customers and employees is a top priority, and why we find it important to maintain a zero tolerance policy when it comes to employee drug and alcohol use.
As an operator of convenience stores and car washes throughout Las Vegas, our employees work near and operate heavy machinery, handle chemicals and, in some instances, drive customers’ vehicles.
Because of these responsibilities, we maintain strict adherence to our own company safety rules and operate in accordance to OSHA guidelines, our own workers compensation insurance policy as well as federal law.
The understanding and acceptance of this policy is well documented and verbally reiterated at the time of hire and through additional training throughout employment with Pit Stop."
ORIGINAL STORY:
A Las Vegas man says he's being discriminated against for his medical marijuana use.
Kyler Wortham says he was fired from his job for failing a drug test, and he's now being denied unemployment benefits.
Wortham, a licensed medical marijuana user; was fired from his job at Pit Stop Carwash in Henderson.
"They said that it doesn't matter if you have a license or not, it's still against their policy and they can't have me working here," Wortham said.
Experts say the carwash was within its rights to fire Wortham.
Paul Padda, an employment lawyer, says Nevada employers can let someone go for any reason as long as it's not for a protected form of discrimination like race or gender.
"[Wortham's] is an unfortunate situation, but the employer is on solid legal ground," Padda said.
Wortham says he had a clean and friendly break with Pit Stop. He understands using marijuana is against federal law.
He applied for unemployment benefits and was denied.
"Right now you have the unemployment office taking a more conservative approach but ultimately again, it's one of those situations where people are going to have to come to terms with it over time and a lot of these issues will have to get hashed out in court," Padda said.
The Pit Stop manager referred our questions to their HR department.
There was no answer and we left a message.
The state unemployment office was closed for the Martin Luther King holiday.
Meanwhile, Wortham has filed an appeal for the unemployment benefits.
"I still feel that I should have the same rights as anyone else who loses their job for reasons beyond their control," he said.
Scripps Only Content 2015