Crazy heat continues in Las Vegas, could be another record-breaking day 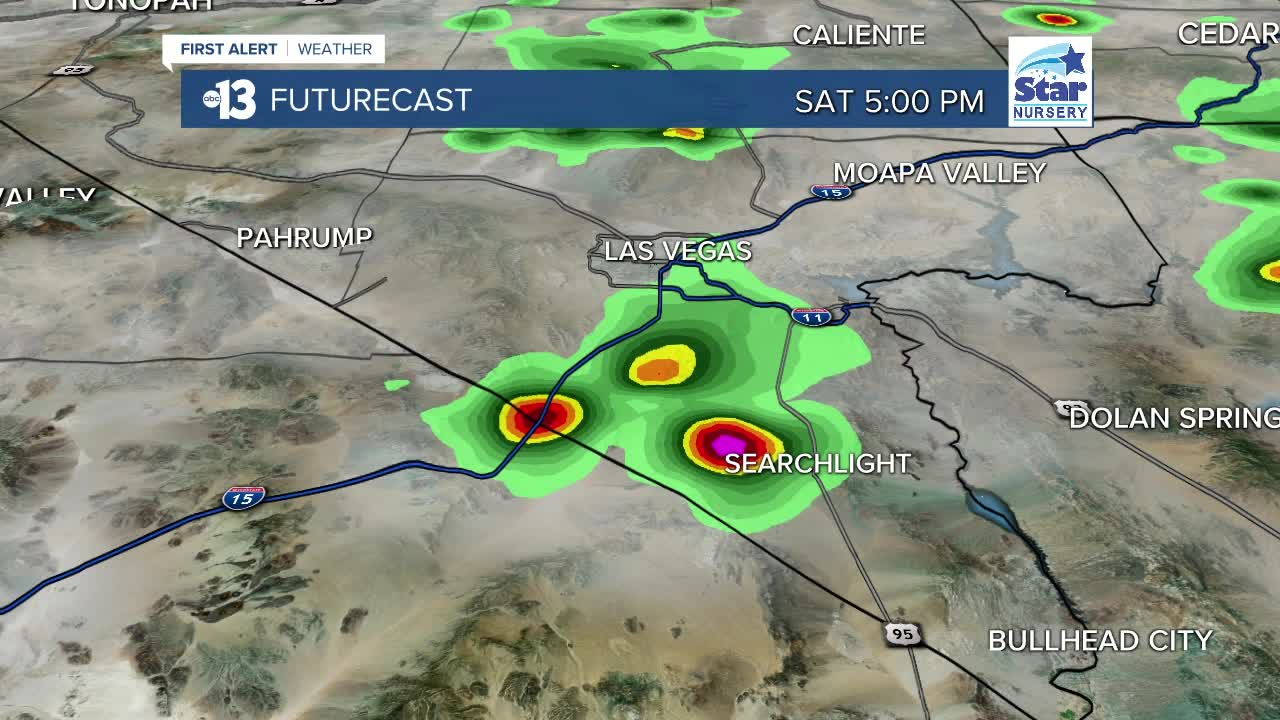 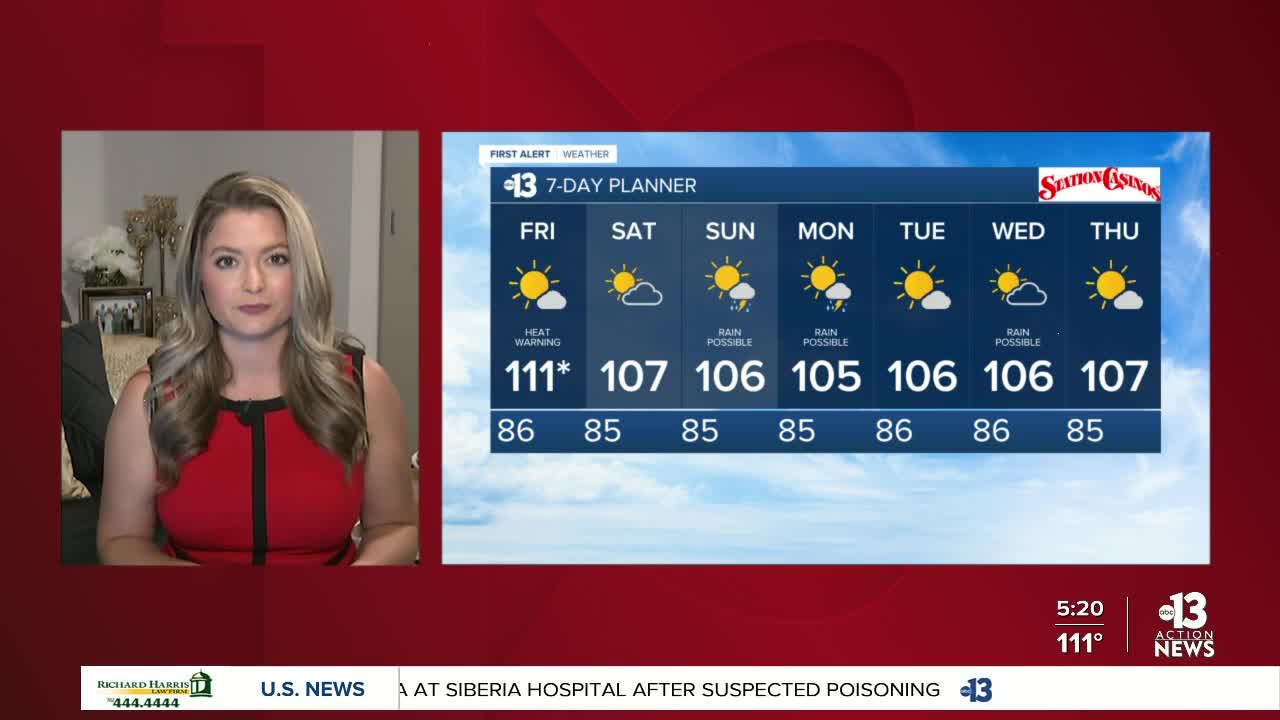 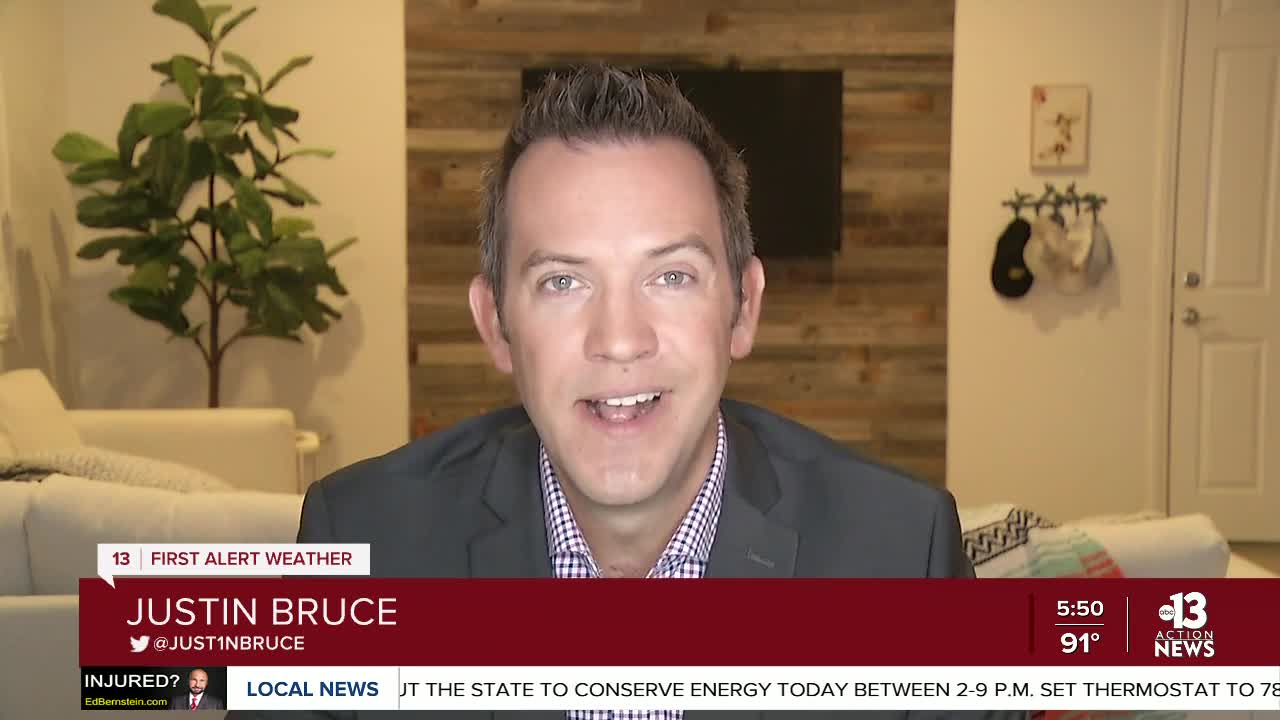 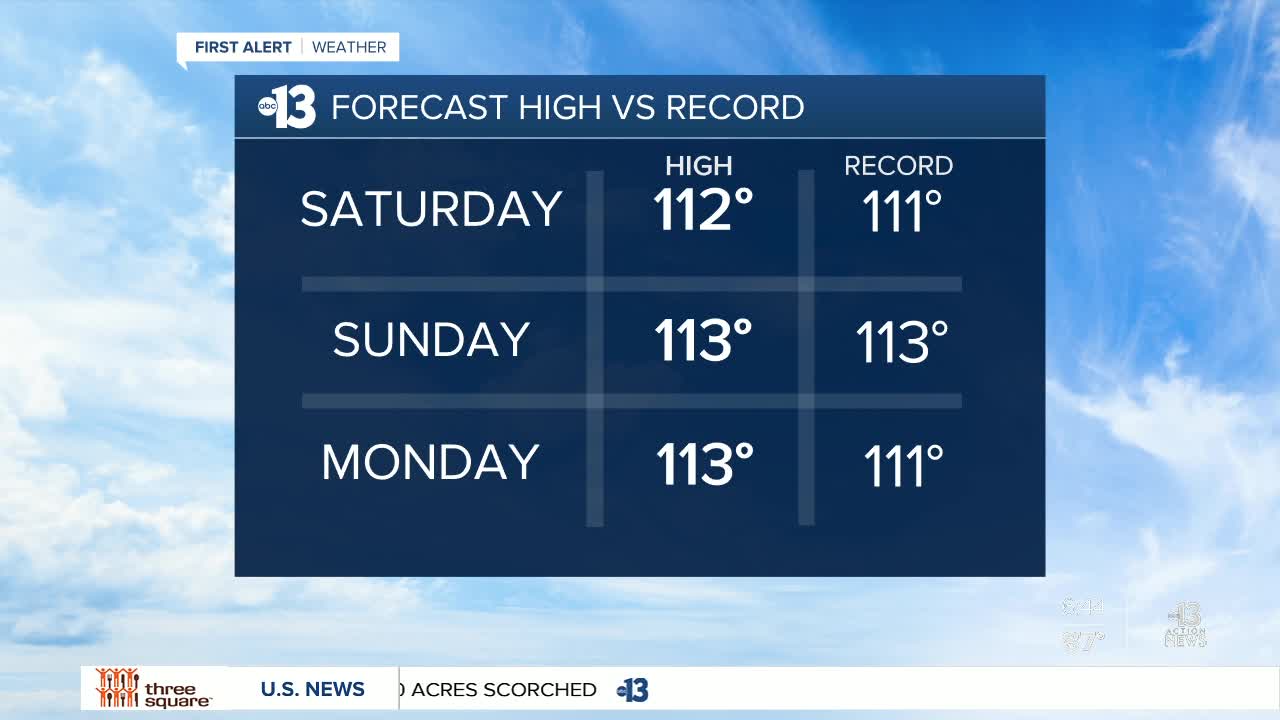 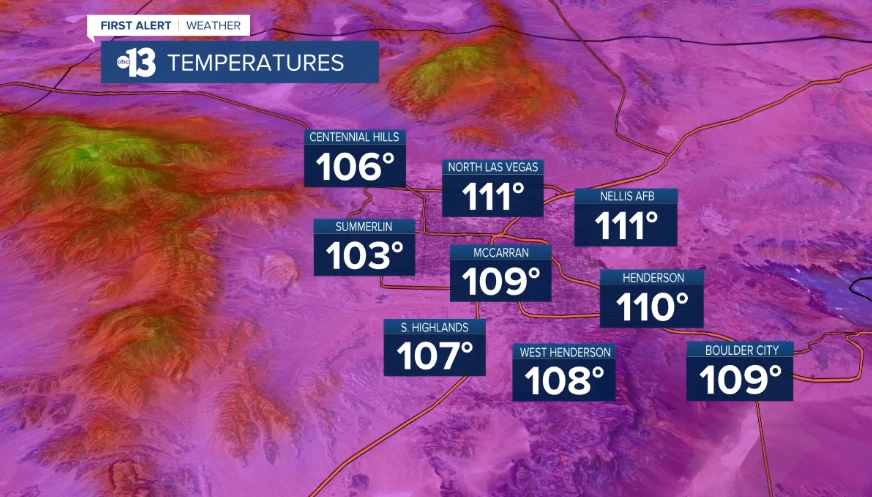 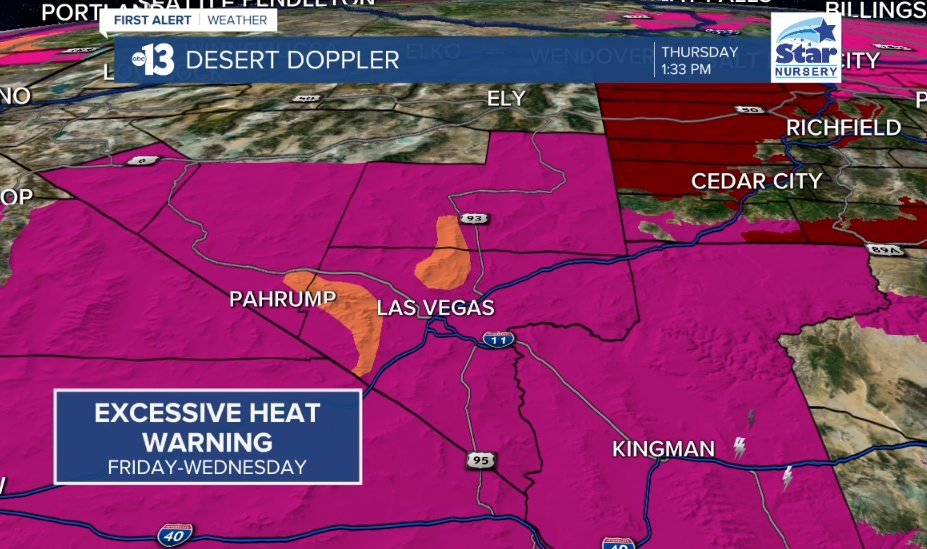 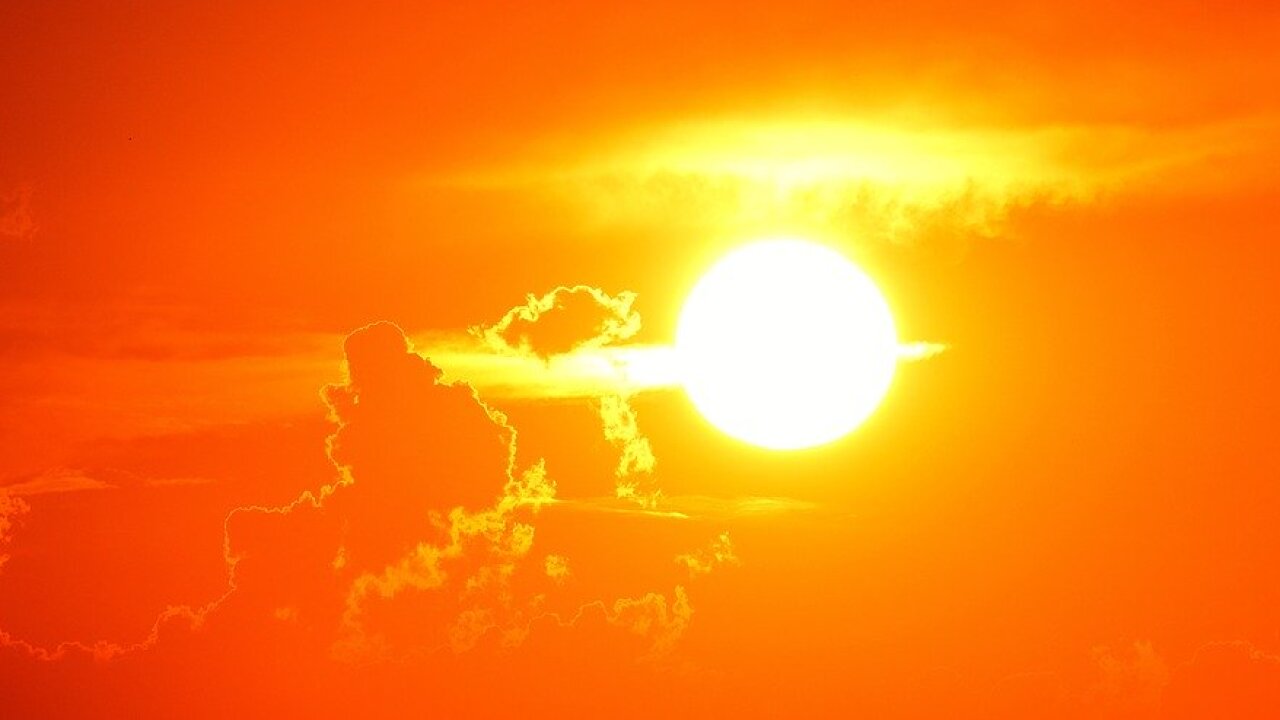 Today could be the 8th consecutive day of highs at or above 110°, which would set a new record for the month of August. The last time we were this hot for this long was 7 consecutive days back in August of 1940.

It's worth noting that Las Vegas has seen stretches above 110° for nine or ten days before, but only in the months of June and July.

Typically, the monsoon kicks in during the month of August and that limits prolonged bouts of dangerous heat.

The good news if you've been missing the summer rain chances is that humidity will climb starting Saturday, and that will set the stage for scattered showers and thundershowers each weekend afternoon, as well as limit highs to 107° each day.

The Excessive Heat Warning has been extended through Friday by the National Weather Service, so please continue to limit time outside and stay hydrated.

The Excessive Heat Warning has been extended to Friday evening, and we'll get back above 110° on Friday for (hopefully) the last time for a little while as the pattern changes this weekend.

The big ridge of high pressure responsible for this stretch of record mid-August heat will weaken and shift from Nevada to the Four Corners, which delivers increased humidity and cloud cover to Southern Nevada this weekend and should keep high temperatures close to 105°.

That's still a few degrees above average for this time of summer, and the extra moisture in the air won't make it feel comfortable.

We run the risk for scattered showers and thundershowers as the humidity climbs, so the chance in Las Vegas climbs to 30% Sunday, Sunday night, and Monday.

WEDNESDAY UPDATE: Today will be the sixth consecutive day of dangerous heat in Las Vegas and the 48th day in a row of triple-digit heat.

Highs will spike at 114° in North Las Vegas and along the east side of the valley from Nellis Air Force Base through Sunrise Manor and downtown Henderson.

The Excessive Heat Warning has been extended through Friday by the National Weather Service, so please continue to limit time outside and stay hydrated.

The forecast at McCarran (where the official Las Vegas temperature is measured) is 113°, which should easily beat the old daily record of 111° from 1992.

In addition to sizzling afternoons, there's been little overnight and early morning relief. This morning's record warm low temperature is 90° set in 2018, and the thermometer at McCarran will be close to that mark.

For the second day in a row, showers and thundershowers are possible. Storms are expected to fire over the mountains after midday and deliver the threat of gusty outflow winds, lightning, and localized downpours. Most of the storms will be drifting to the west or the northwest, so places like Primm and Pahrump may encounter rain at some point this afternoon, which would cut the heat.

In Las Vegas, we'll watch for stray showers or thundershowers to potentially spill off the higher terrain down into the valley during the early-to-mid afternoon.

The heat may finally relent by the weekend, as the forecast drops close to 105° on account of climbing humidity as moisture from the remnants of Hurricane Genevieve in the Pacific Ocean moves our way. It's a bit early to confidently forecast rain, but showers and thundershowers look possible Sunday into Monday.

TUESDAY UPDATE: Record daily highs will continue to fall across Southern Nevada as our large ridge of high pressure delivers temperatures more than 10° above average.

Storms popping up this afternoon in Arizona will drift from east to west into places like Laughlin and Primm with the threat of lightning and gusty winds. There's also a chance for thundershowers over the mountains that surround Las Vegas, so we can't rule out a stray shower or storm-related wind gust here in the valley.

Temperatures will hit 113° again on Wednesday before gradually dropping 1° each afternoon on Thursday and Friday.

Nevertheless, daily records will be tied or broken during the next four days.

The Excessive Heat Warning runs through Thursday, so please continue to limit time outside, stay hydrated, and take breaks in the air conditioning.

A sliver of hope arrives this weekend in the form of highs just below 110° - we'll be 109° on both Saturday and Sunday.

It's not much relief, but hopefully a sign of things to come next week. As the ridge of high-pressure shifts to the Four Corners region by Sunday, the southerly flow could deliver more clouds and additional small thundershower chances.

Both of those factors should keep our temperatures below 110° into next week.

The Clark County Department of Environment and Sustainability (DES) has issued a smoke and ozone advisory for Aug. 18 and 19 for elevated levels of smoke and ozone due to the regional wildfires in the southwest U.S.

DES Division of Air Quality officials say smoke is made of small dust particles and other pollutants that can aggravate respiratory diseases and contribute to ground-level ozone formation.

MONDAY UPDATE: Record-shattering heat is expected in Las Vegas for the next several days as a huge ridge of high pressure controls the weather pattern across the western half of the United States.

Record highs should be tied or set each of the next seven days, which is very impressive.

The old record for consecutive days at or above 110° for August is seven days, set in 1940.

The record for consecutive days at or above 110° for any time of summer is 10 days, which happened in June of 1961. We'll watch that record closely because it's in jeopardy of being tied by Sunday afternoon if the forecast pans out.

SUNDAY UPDATE: Sunday's high temperature is expected to tie the previous record for the day, set in 1939, at 113°.

The Las Vegas area also remains on track to break the 1940 record of a seven-day streak with temperatures 110° or above. Temperatures at that level are expected to last through Friday for an eight-day streak.

A Heat Advisory and Excessive Heat Warning remain in place through Wednesday.

SATURDAY UPDATE: The record high temperature for the date of Aug. 15 has been broken. It was 113 degrees officially today for the Las Vegas valley.

The Excessive Heat Warning is still in effect until 10 p.m. Wednesday. According to the latest forecast, Southern Nevada is expected to break records for high temperatures Monday through Thursday. Here are the current predictions:

UPDATE: An Excessive Heat Warning is in effect from 11 a.m. Friday through 10 p.m. Wednesday for Southern Nevada.

Temperatures are expected to go up from there. The predicted high for Saturday is 112; 113 for Sunday; and range from 112 to 113 for Monday, Tuesday and Wednesday.

It is also expected to be very dry, with only a 10% thundershower chance in the mountains around Las Vegas starting Saturday.

The monsoon runs through September 30th, so there's plenty of time for things to change, but at this point in time, 2020 is the #1 driest monsoon in Las Vegas weather history.

The warning includes Clark, Nye and Lincoln counties as well as Mohave County in Arizona and southeast California.

With the #ExcessiveHeatWarning taking effect for Las #Vegas and #ClarkCounty today, a number of cooling stations are being opened for those who need them. Everybody, please take caution if spending time outside, @NWSVegas forecasting temperatures over 110 degrees.#VegasWeather pic.twitter.com/uqXxZOnzb1

The Excessive Heat Warning is currently poised to run through Monday, but it will likely be extended through much of next week.

Based on the latest computer model guidance, highs will likely range from 110° to 113° from this Friday, Aug. 14, through next Friday, Aug. 21, which would be an eight-day stretch.

Per the National Weather Service in Las Vegas, the longest stretch of August heat at or above 110° is seven consecutive days, set back in 1940.

The valley has seen six times where 110° was observed for five or six consecutive days in the month of August.

Record high temperatures in Las Vegas are forecast to be tied or broken this Saturday, Aug. 15, through next Friday, Aug. 21.

During the Excessive Heat Warning, Clark County announced it will offer options of cooling stations and daytime shelters.

American Legion Richard Springston Post 60
Location: 1510 Bruce Woodbury Drive in Laughlin
Phone: 702-299-1510
Hours: 8 a.m. - 8 p.m. on days with temps over 112 degrees
An outside cooling area is available for pets that are under the control of the owner on a leash or in a carrier.No pets allowed inside.

Clark County says the different sites will have precautionary measures such as screening protocol, social distancing, and mask requirements in place in response to COVID-19.