Copyright 2018 Scripps Media, Inc. All rights reserved. This material may not be published, broadcast, rewritten, or redistributed.
Flickr / mathias6170

With temperatures across the Las Vegas valley climbing into the triple digits it is important to know how the heat will affect the devices you depend on regularly.

Many people aren't aware of the effects of heat on their electronics. It can be as small as a warning screen that hinders your selfie-taking or as damaging as cracking your screen or short-circuiting your hard drive.

Here are few things to remember as temperatures rise around town.

According to Apple support, the ideal temperature for an iPhone is between 32º to 95º F. When used in temperatures hotter than 95º you run the risk of permanent damage, such as shortened battery life. There have also been reports of screens cracking due to excessive temperatures.

The temperature warning screen shows up on an iPhone at 113º F and is designed to warn Apple users that temperatures are slowing down the device. This can happen in parked cars, which Apple often says exceed the 113 degree temperature during the warmer months.

Quora.com says phones will function until the 212 degrees Fahrenheit but at that temperature physical damage such as melting will become visible. 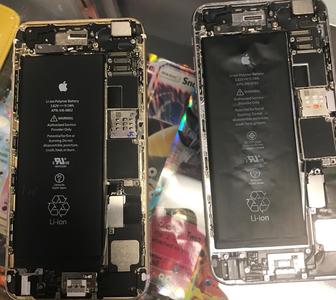 Condensation is one of the biggest concerns when it comes to toting your camera around in high temperatures, says Photoshelter.com. "When condensation forms inside a lens, for instance, internal elements can fog up, preventing clear images. When condensation gets bad enough inside a camera body, it can cause short circuits resulting in unexpected shutdowns. Worse yet, when equipment temperatures finally equalize to the warmer environment, water droplets on glass surfaces inside a lens may dry out and leave spots, mildew or fungus that can’t be cleaned by the photographer."

The quick change in temperature from an air-conditioned room to dry warm climate is enough to set these problems in motion and ruin your device.

Excessive heat can cause your laptop or computer to slow down and protect itself from overheating. Chron.com says, "Laptop and desktop computers are vulnerable to overheating. The electronic components operate at a specific current induced by a low voltage. The sensitivity of the components means that even a small fluctuation in voltage is dangerous. Excessive heat lowers the electrical resistance of objects, therefore increasing the current. In addition, a slowdown is a result of overheating."

Similar to cameras, condensation is also a major concern when it comes to computers and laptops. A build-up of condensation is known to cause short-circuiting in the hard drive.

There are some measures you can take to protect your devices from the extreme summer temperatures.

There are also some hazards that come with being outdoors with your devices.

Some of you may be hoping to beat the heat by laying out at a pool this summer but DriveSavers warns people that it's important to be mindful or your electronics in those scenarios.