Dust, wind and thunderstoms that moved through the area put a damper on clean-up efforts for some neighborhoods in Henderson. Some residents were still without power as of Saturday afternoon.

WATCH the full story in the video player at the top of this page.

A fast-moving thunderstorm left trees uprooted all through Henderson and the southeastern portion of Las Vegas and doing even more damage to other homes.

"We heard the roof go up. We heard the crack and the crash must have been when it hit the road over there," John Shaw said of sitting inside his house as the winds from the thunderstorm demolished his neighborhood.

Here's a look at the radar from roughly 530-810pm. You can see the explosive development over the SE valley between 630-730pm. A few showers continue to linger south of the valley moving this way. They are currently weakening but we are still monitoring them. #VegasWeather #nvwx pic.twitter.com/sf0ygW1V14

That damage near Eastern Avenue and Serene Avenue included a large tree uprooted across from Shaw's home that had a nearly ten-foot-tall root ball.

Part of Shaw's roof was also ripped off, but the damage was nothing compared to the home next door that had the patio cover thrown over the house landing at least 150 feet into the road.

That home also had the rooftop air conditioner thrown shifter about 10 feet on the roof.

"We saw Bryan [Scofield] showing it [the storm] blowing up on the satellite, but by the time it hit we had to get away from the window because stuff was hitting the house and you could hear it bam, bam bam.  It was crazy," Shaw said.

Several homes in the neighborhood had their garage doors either ripped or bent.

Other damage throughout the valley included trees falling on cars.

One couple in Seven Hills had trees fall in their front and backyard.  One of them crushing their van.

As crews continue repairs on last night’s storm damage, we have more power poles down in Henderson. This time on Sunset near Arroyo Grande. @KTNV @bryanscofield1 pic.twitter.com/LckYkzCFU9

Downed trees throughout the southeastern portion of the Las Vegas valley also slowed traffic in areas. 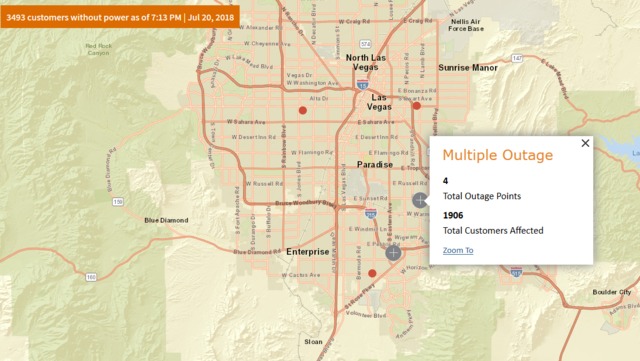 This is after over 20,000 people lost power during last night's storm.