Most Wanted in Las Vegas for week of Feb. 4

Henderson Police are asking for help identifying a man who robbed a U.S. Bank last month.

Henderson Police are asking for help identifying a man who robbed a U.S. Bank last month.

The man entered the bank, located at 830 S. Boulder Highway, at about 3:20 p.m. on Jan. 26. He passed a note to a bank teller demanding money from the bank employee. The employee handed over an undisclosed amount of cash and the suspect walked out of the bank.

The suspect is described as a black male adult, approximately 6 feet tall and weighing between 230-250 pounds. He was last seen wearing a white hooded sweatshirt and a black baseball hat. 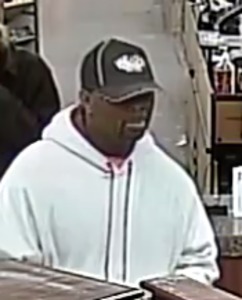