UPDATE JAN. 2: Police have arrested 3 people for invading an elderly couple's home on Dec. 27 and stealing their Tesla.

They have been identified as 27-year-old Samuel Raoque, 24-year-old Immanuel Collins and 25-year-old Josette Paga.

Paga is facing a charge of using a credit card without permission.

UPDATE ON DEC. 30: LVMPD Detectives have obtained photos of the three people suspected of breaking into the elderly couple's home. 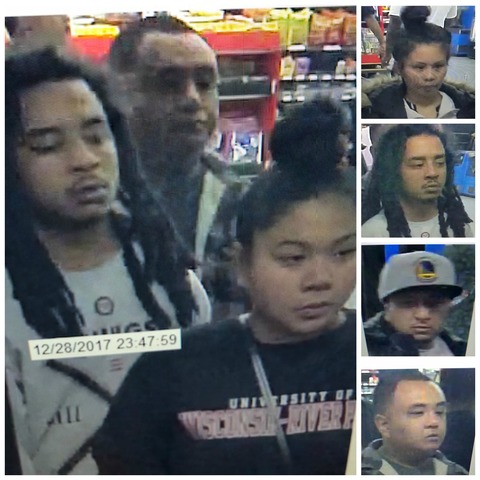 Anyone with information on their whereabouts should call LVMPD Spring Valley Area Command Investigations Section at 702-828-2640. To remain anonymous, call Crime Stoppers at 702-385-5555.

UPDATE ON DEC.27: According to LVMPD,  hours after the attack, police found the stolen Tesla in North Las Vegas. But the men responsible are still on the loose.

ORIGINAL STORY: Overnight, three men broke into the home of an elderly couple near Twain Avenue and Decatur Boulevard. The couple, said to be in their 60s or 70s, say the men entered the home armed with knives and attacked them.

Police were called about 1:15 a.m. to a home on the 5300 block of Holbrook Drive, near Flamingo and Lindell roads, according to Metropolitan Police Lt. David Gordon.

Three men armed with knives broke into the home and attacked the homeowner, who is in his 70s, and his wife, who is in her 60s, Gordon said.

Another man in his 90s was inside the home during the robbery, Gordon said, but was not harmed.

We've come to find out that the thieves took personal items from inside of the home before turning their sights on the couple's Tesla vehicle.

The elderly victim tried to thwart the car theft but ended up being dragged behind the vehicle.

"I started hearing some louder screaming and yelling and it was the kind of screaming that made me concerned."

Neighbor Steve Schieffer was awake when it all happened. He told us he saw the couple's garage door closing and the Tesla speeding off from the driveway. Another neighbor noticed the elderly man lying on the ground with a gash on his head and called 911.

"It's one thing to rob people in their home but to hurt them, that's another story," says Shchieffer.

We talked to the couple's daughter. She did not want to speak on camera but did tell us her parents are still in the hospital and are expected to be okay.