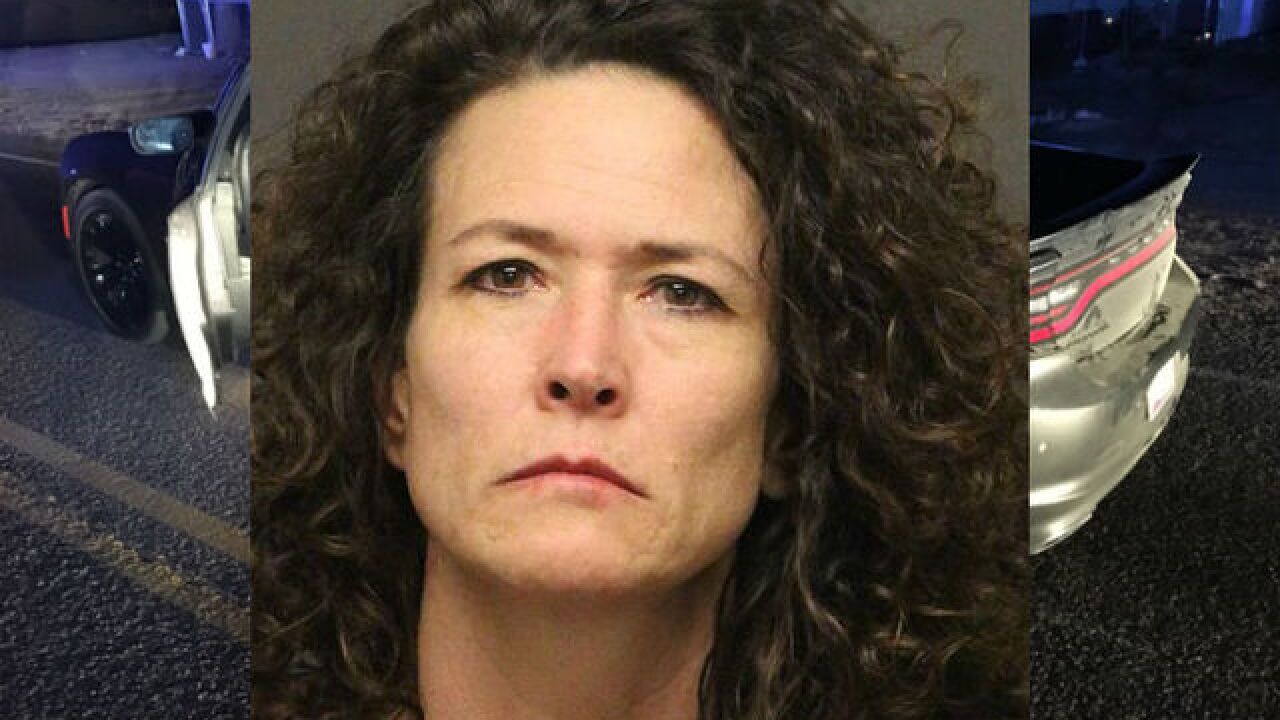 An Arizona woman was arrested Wednesday evening after the Mohave County Sheriff's Office said she injured two deputies and led them on a 19-mile pursuit.

Around 6:55 p.m., deputies observed a gray Dodge Charger traveling southbound on Highway 95 that was traveling over the posted speed limit. The vehicle entered a right turn only lane to pass another vehicle and then accelerated to approximately 60 MPH in a posted 45 MPH zone.

A traffic stop was conducted in the parking lot of a car wash in the 5000 block of Highway 95. As the deputy approached the vehicle, he observed heavy window tint, and the driver’s side window was down approximately 1-2 inches, and as deputies approached, the driver rolled up the window, preventing the deputy from seeing inside.

Deputies knocked on the window, and the driver, later identified as Sims, opened the window about 1-2 inches and began yelling at the deputy for stopping her. Deputies advised her to roll down her window further, which she refused. The deputy identified himself, and Sims again yelled at the deputy, stating he was lying about who he was. The deputy requested the driver’s license and vehicle information, and she refused.

The deputy advised Sims she was being detained for reckless driving, to which she replied “No I’m not”, put her vehicle in gear, and spun her rear tires, striking the deputy with the driver’s side rear corner panel of the vehicle. Sims continued through the parking lot, through a barricade, and inside the car wash. The vehicle was now blocked in, as there was another vehicle inside the car wash. Deputies were able to place a spike strip under the vehicle’s driver’s side rear tire, and deputies issued several verbal commands to Sims to exit the vehicle, which she refused.

Deputies began breaking the passenger window, and Sims partially rolled down the driver’s window, when deputies reached inside to unsecure the door. Deputies attempted to grab Sims, when she accelerated, ramming and pushing the other vehicle out of the car wash. Sims then maneuvered out of the parking lot and headed north onto Highway 95.

A pursuit ensued, with Sims’ vehicle reaching speeds of approximately 80 MPH, and running several red lights. Sims continued the pursuit onto the Bullhead City Parkway, while the back driver’s side tire was blown out and was riding on the rim. Sims turned left onto Highway 95 and continued into a residential neighborhood. A short time later, the exposed rim of the vehicle came apart, flinging metal pieces from the vehicle. One of the pieces struck a deputy’s vehicle, creating a hole in his windshield and sprayed the deputy with glass fragments, hitting his eyes and arms.

Sims came to a stop just west of Rio Vista and Ramar roads in Bullhead City. Once stopped, Sims opened the rear passenger door and placed her keys on the ground, then closed the door. Verbal commands were given for Sims to step out of the vehicle, to which she complied. Verbal commands were given for Sims to walk backwards toward deputies, which she refused. Deputies grabbed  Sims and attempted to place her in restraints, and Sims continued to resist by pulling her arms away from deputies.

A civilian vehicle sustained damages to two windows from the flying debris. The deputies involved were evaluated by medical staff and received minor injuries. The 37-minute pursuit led deputies and assisting agencies through 19 miles of Fort Mohave and Bullhead City.