NEWS: Protestors clashed with police for hours Friday afternoon in response to the death of George Floyd in Minneapolis. 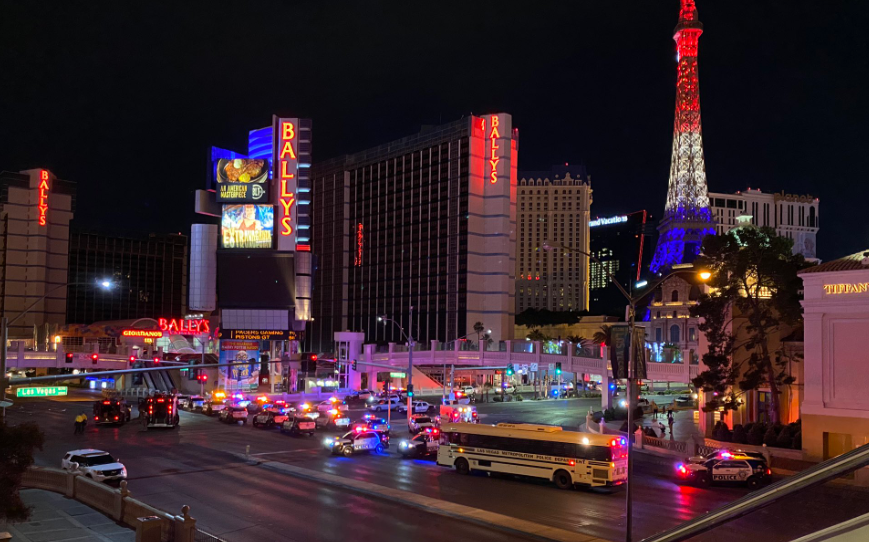 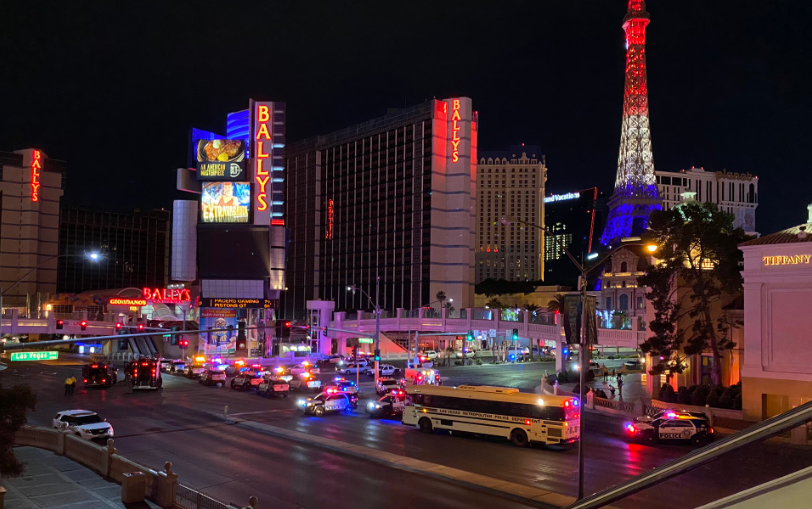 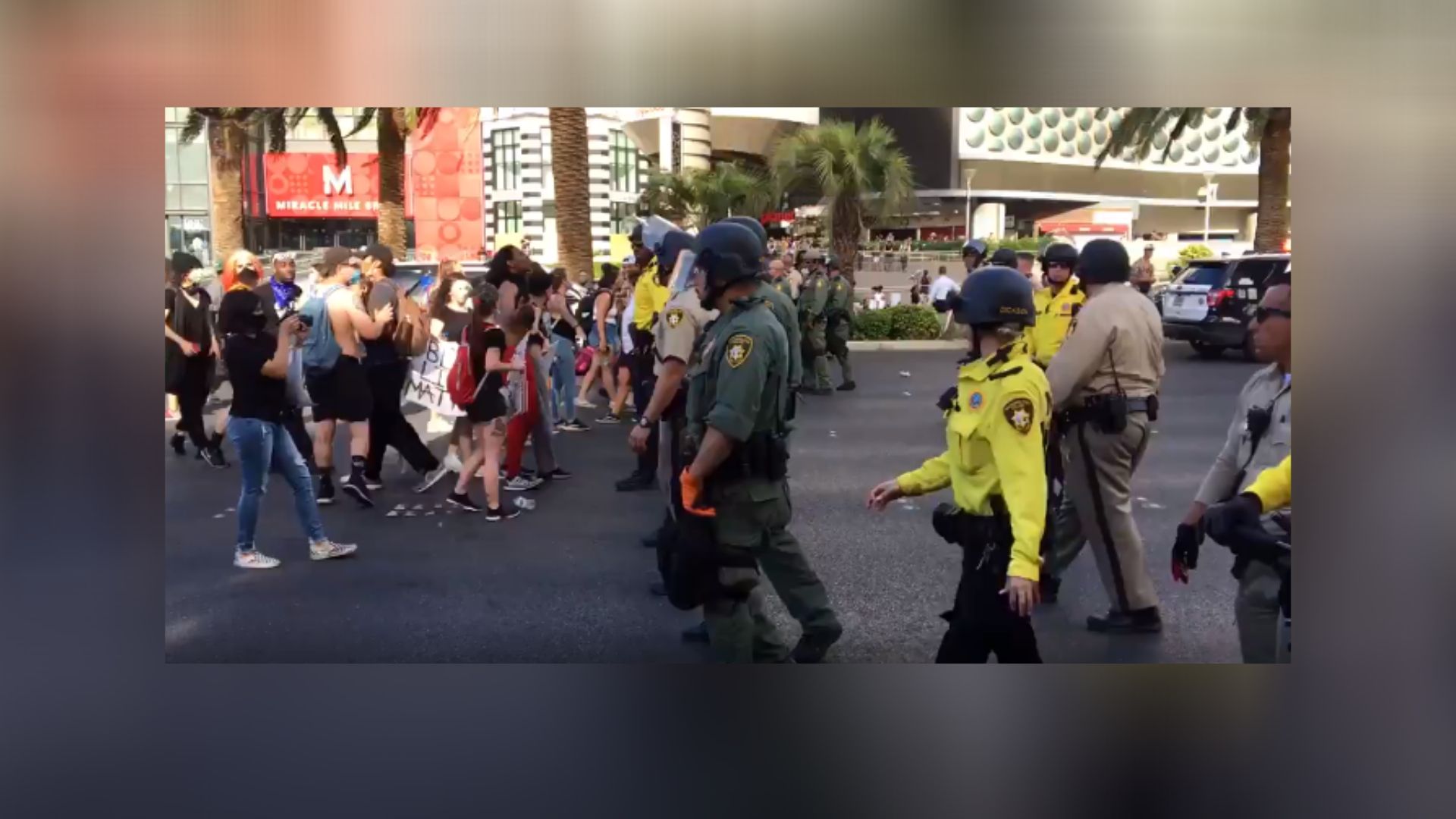 The LVMPD said 12 officers were also injured during the protest, along with property damage seen on Las Vegas Boulevard.

Authorities reiterated that their presence at such demonstrations is to ensure that everyone can exercise their First Amendment rights, but they will arrest people for acts of violence and vandalism.

"The officers and everyone at the LVMPD sees this situation with great empathy. While we understand people are hurting, we are here to see that more people aren't hurt in clashes," said LVMPD Sheriff Joe Lombardo. "It does not serve the memory of a man to destroy, loot, and hurt others in his honor. It does honor him by standing up for what is right. And in that case, the LVMPD will stand with its citizens as they exercise their freedom to speak out."

Friday's demonstration began peacefully, as 200 to 300 protesters gathered by the Miracle Mile shops near Las Vegas and Tropicana boulevards to protest the death of George Floyd, who was killed by a Minneapolis police officer.

Authorities said the protest began to wind down after several hours until a group of agitators arrived to ratchet up tensions. That is when officers ordered the crowd to disperse. The LVMPD says such orders are given when a crowd has become unruly or unsafe and meant to protect people from harm. Officers issued several orders for the crowd to disperse.

However, those who refused to comply with those orders were arrested. Two of the people arrested were local photographers. One of them works for the Las Vegas Review-Journal and the other is a freelance photographer who has contributed to several major publications. The photographers were briefly jailed before being released early Saturday morning.

The officers were mostly injured by rocks that were thrown at them. The property damage appeared to be in small pockets throughout the Strip corridor and occurred as small groups splintered off from the large crowd, according to the LVMPD.

Officers say as they prepare for another round of possible protests on Saturday, they ask members of the public to keep demonstrations peaceful and lawful.

"George Floyd was killed by a despicable and loathsome Minneapolis police officer. He and the other officers who watched, and didn't come to Mr. Floyd's aid, should be prosecuted to the fullest extent of the law. Of that, we have no doubt.

Here in Nevada, while racial, social, and cultural divides still exist, we have made significant strides in confronting these schisms. In the past 20 years, community, law enforcement, and government leaders have been working together in efforts to address the issues that divide us and the tragic consequences of bigotry.

In just the past few years, Nevadans have elected the first African American Supreme Court Justice, Speaker of the Assembly, Attorney General, Congressman, and the first Latina to the United States Senate. Despite those proud accomplishments, there is so much more we must do to ensure social justice, equal opportunity, better education, and the overall eradication of all forms of racism in our communities and our State.

To the protesters... we hear you, and we are listening, and more importantly, we invite you to be part of a constructive solution and the healing our community desperately needs. We respect and defend your right to protest, but please express yourself peacefully.

Capt. Koren said 30-40 protesters were arrested, and two officers were injured, both with non-life threatening injuries.

Those who were arrested in the protest violated the law and made it unsafe for others, according to Capt. Koren.

Authorities said they do support people's First Amendment right to protest but ask those who are to obey the laws.

The LVMPD stands with our community and censures any police brutality. As we continue to facilitate spontaneous and planned protests, violence or property damage will not be tolerated.

UPDATE 8:30 P.M. Protesters traveled back down Las Vegas Boulevard south to their starting point near Flamingo Road and the Bellagio hotel-casino.

Las Vegas police lined the intersection with officers to help halt and disperse the group after a few hours of the relatively peaceful protest on the Strip.

13 Action News crews saw a few protesters detained within the intersection but overall no immediate reports of any further violence in the demonstration.

The SWAT team has set up not far from where we are. @KTNV pic.twitter.com/tUxCyXnkTF

UPDATE 6 P.M. A large group of protesters took over the Las Vegas Strip in demanding justice for George Floyd.

Video from Chopper 13 showed a few protesters detained but overall no immediate reports of any violence in the demonstration.

The group started their protest at Las Vegas Boulevard and Flamingo Road and headed north on the boulevard to the corner of Fashion Show Mall Drive.

UPDATE 4:45 P.M.: Las Vegas police have responded to the Las Vegas Strip, near the Bellagio hotel-casino, as the demonstration for justice after George Floyd's death continues.

ORIGINAL STORY
Protesters are gathering on the Las Vegas Strip this afternoon to protest the death of George Floyd, who died after being detained by Minnesota police officers.

The protesters are meeting on the sidewalk in front of the Bellagio hotel-casino. Many of them area carrying signs.

A group of #BlackLivesMatter demonstrators have come out to the Bellagio to demand justice for #GeorgeFloyd - some say the charges against #DereckChauvin are not enough, that he should be charged with first degree murder @KTNV pic.twitter.com/jZpQhBv3tf

(*explicit language*) @LVMPD officers say they’re here to help demonstrators, mention @Sheriff_LVMPD statement from last night. Most protesters nodding. One man yells “bullshit” that officers are trying to help. He did not want to speak on camera about why @KTNV #BlackLivesMatter pic.twitter.com/ptfzsG30kd

The 46-year-old man died after a police officer named Derek Chauvin knelt on his neck while he lay in handcuffs on the ground. Floyd, who was unarmed, can be heard pleading with officers, telling them he could not breathe. Eventually, he passed out. However, the police officer did not remove his knee until medical personnel arrived.

RELATED: Protests erupt across US following death of George Floyd

Chauvin has been arrested and has been charged with 3rd degree murder and manslaughter. Three other police officers have been fired.

RELATED: Officer who knelt on George Floyd's neck has been charged with his murder

Protests have rocked several communities in the last few days, many of them turning violent.

Protesters say their plan is march north along the Strip to Circus Circus, at least a hundred protesters out now @KTNV pic.twitter.com/GxGo4xb3Vz

This boy is 5 years old. His mom says it won’t be long before the world doesn’t think her son is cute anymore and instead feels threatened by his presence. That’s why they say they’re out here marching today, for #GeorgeFloyd and countless others @KTNV pic.twitter.com/eC7jtG1pds